Send in the Clowns? 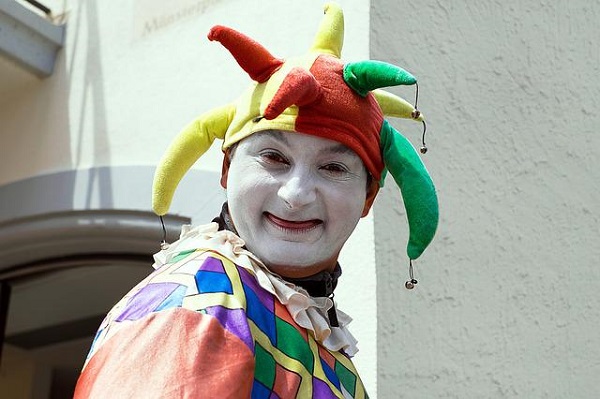 Image by Couleur from Pixabay

It is painful to watch what seems to be the collapse of Western culture, including the serious degradation of our own country’s ideals and the descent into what can only be described as lawlessness. It’s just so foreign to people who have lived long enough to remember when our nation cherished its ideals of freedom based on American justice and lawful order. We are also watching the Christian church break from its moorings and flit off into anti-Christian, often pagan, doctrines and practices. None of this is unheard of or a new phenomenon in history – people who know history can point to such hellish upheavals as the French Revolution in the late 1700s and other ghastly examples of rapid societal deterioration. Still, people never seem to believe that dusty old history may very well repeat itself, and our present-day disruptive and destructive shift appears to have emerged in the blink of an eye. It is not just Christians who are dismayed at the change – even many principled non-believers are shocked today by the utter collapse of Western culture’s morality and ethics and our long-vaunted rule of law. We seem to have stampeded as a society towards the idea that humans set free of antiquated notions of God know best how to achieve the good life. Yet we see them call for complete “freedom” while destroying the very basis for freedom. When the rule of righteous law is thrown out, it will eventually be replaced by the red-fanged law of the jungle. Civilizational sanity is not out-voted or out-argued but simply canceled.

Paul describes what seems to be a three-step process to a civilization’s downfall in the first chapter of the book of Romans. The process begins when people suppress the truth in unrighteousness. (Romans 1:18) “Activists” apply pressure to reject what they deem to be outdated, antiquated moral restraints and replace them with new self-affirming, self-centered “liberation.” Historically speaking, such “liberation” does not lead to real liberty but fascism. What truth exactly are they suppressing? The truth of God’s existence and His right to determine right from wrong in His creation as the Creator.

In order to do this, they blind themselves – just obstinately refuse to see – God’s general revelation of Himself in nature, though His existence is completely obvious from the creation:

For what can be known about God is plain to them because God has shown it to them. For his invisible attributes, namely, his eternal power and divine nature, have been clearly perceived, ever since the creation of the world, in the things that have been made. So they are without excuse. (Romans 1:19-20)

The denial of God’s existence gives the illusion that humans are the highest evolved beings on the planet, and God is deemed merely a creation of mankind. Perhaps God was created to “control the masses” or provide an opiate to oppressed people or some other such nonsense.

An atheist commented recently on one of our Unknown Webcast videos, “Why does the Apologetics Industrial Complex Have So Little Impact in the Church?” His initial answer to this title was:

The reason apologetics is largely irrelevant to the church is because your religion is make-believe.

In other words, God does not exist, and we (believers) have simply made up a God to our liking and, therefore, according to the commenter, for Christianity:

Critical thinking, skepticism, and science is largely irrelevant. Gullibility is the sole criteria for redemption.

Believers in God are not anti-science nor gullible, and we strongly believe in critical thinking. We make a case for the existence of God, as Paul did, from the very existence of the universe. We, therefore, responded that Nothing comes from nothing. We compared that alongside the materialistic idea that, in the beginning, was nothing, and nothing – for no apparent reason – exploded into everything. The Atheist’s retort to our logic was fairly predictable. Said he:

We note that our atheist friend did not attempt to present a reasonable refutation or to build a positive case for his position. He simply dismisses and rejects what Paul says is “clearly perceived,” with no alternative theory to offer. Paul goes on to say that the result of deliberately turning a blind eye to God is a darkening of hearts and an increase in futile thinking. (Romans 1:21) Mankind has not invented God – they have rather invented excuses as to why the God we can all see the evidence of does not exist.

Paul tells us that the next step downward after deliberately dismissing God is flagrant arrogance and the downward devolution into completely anti-intellectual paganism:

Claiming to be wise, they became fools, and exchanged the glory of the immortal God for images resembling mortal man and birds and animals and creeping things (Romans 1:22-23)

What intellectual muscle is exercised in the worship of creeping entities? Look, there’s a June bug – let’s bow down to it! For that matter, what intellect is involved in worshipping any man? In their darkness, they trade in the God in whose image we are created for the image of a god we create for ourselves. Oddly, the newly created deity, whether depicted as a bird, beast, bug, or man, remarkably reflects back to us the ideas and prejudices of fallen mankind.

For example, science and biology are thrown out in today’s thinking – males and females are now completely subjective categories. The idea that mankind is objectively “male and female,” supported by science as long as there has been science – is rejected in favor of fluid genders based on personal desires and feelings. A biological male that presently “feels” like a woman – whatever that means – IS a woman and must be addressed by “her” preferred pronouns or else. Same goes in the reverse scenario. An adolescent that “feels” liquid – two years ago, “Liquid” was not even a gender – IS Liquid, whatever that entails. He, she, or it can change back tomorrow or next week if they “feel” differently. Yet we Christians are the ones said to be anti-science. In response to Dr. Corey Miller’s recent blog, “Is it Really All About Sex?” one commenter praised the abandonment of biblical morality.

Happily, morality is indeed subjective and gets better as time goes on, generally, so we have abandoned the ignorant and hateful nonsense in the bible. Christians, alas, are stuck with that ignorance.

Does man’s changing views of morality – AND REALITY – make his personal choices better as time goes on? No, Paul states in Romans 1 that what man experiences as he knowingly deviates from God’s revelation is God’s “giving him up” to disaster upon disaster. With deliberate debauchery comes ever more vile debauchery, yet God allows them to remain on their downward trajectory. Three times Paul repeats this sad litany:

Therefore God gave them up in the lusts of their hearts to impurity (Romans 1:24)

For this reason God gave them up to dishonorable passions. (Romans 1:26)

And since they did not see fit to acknowledge God, God gave them up to a debased mind to do what ought not to be done. (Romans 1:28)

With the final downward step, God renders judgment by removing His hand of restraint and letting the rebellion run on its own steam:

They were filled with all manner of unrighteousness, evil, covetousness, malice. They are full of envy, murder, strife, deceit, maliciousness. They are gossips, slanderers, haters of God, insolent, haughty, boastful, inventors of evil, disobedient to parents, foolish, faithless, heartless, ruthless. Though they know God’s righteous decree that those who practice such things deserve to die, they not only do them but give approval to those who practice them. (Romans 1:29-32)

Mankind became “futile in their thinking, and their foolish hearts were darkened…Claiming to be wise, they became fools.” Romans 1:21b and 22. Terribly sad, but we are seeing it happen before our eyes.

How then do we, as the redeemed, live in an increasingly pagan culture? The Apostle Peter, who also lived in a similar culture when he penned his epistle, speaks to this. It includes a favorite apologetics verse, 1 Peter 3:15, but there is a larger and essential context:

Finally, all of you, have unity of mind, sympathy, brotherly love, a tender heart, and a humble mind. Do not repay evil for evil or reviling for reviling, but on the contrary, bless, for to this you were called, that you may obtain a blessing. For

“Whoever desires to love life
and see good days,
let him keep his tongue from evil
and his lips from speaking deceit;
let him turn away from evil and do good;
let him seek peace and pursue it.
For the eyes of the Lord are on the righteous,
and his ears are open to their prayer.
But the face of the Lord is against those who do evil.”

Now who is there to harm you if you are zealous for what is good? But even if you should suffer for righteousness’ sake, you will be blessed. Have no fear of them, nor be troubled, but in your hearts honor Christ the Lord as holy, always being prepared to make a defense to anyone who asks you for a reason for the hope that is in you; yet do it with gentleness and respect, having a good conscience, so that, when you are slandered, those who revile your good behavior in Christ may be put to shame. For it is better to suffer for doing good, if that should be God’s will, than for doing evil. (1 Peter 3:8-17)

Biblically, our focus is NOT to be on fixing the world around us. We may fervently wish to, but that isn’t our calling or task and is certainly way beyond our capabilities. We should not really be surprised when cancel culture tries to cancel us. We don’t have to like it. Peter went on to say those who slander us will be put to shame by our good behavior. People are watching us, even if we cannot always discern the eyes upon us. Our objective should be Christian unity, caring for each other, and praying for each other, as well as the people outside the circle of faith. We should always be ready to give “a reason for the hope” that is in us, the hope of eternal life after this life is over. Some people will listen. We may not change our culture or civilization before the Lord returns, but God can use us to make a difference to those God puts in our path, and that is our desire.Ω