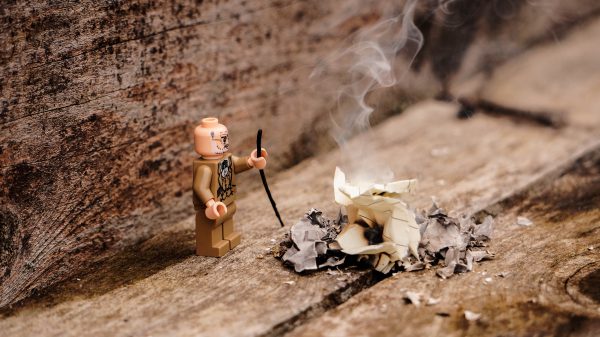 Photo by Kalea Jerielle on Unsplash

Could it be that many who like to claim Christianity as their faith can only do so by minimizing God? In Christianity& Liberalism by J. Gresham Machen, Machen spends a fair amount of time addressing how liberal theologians in his day, who were “in search of the historical Jesus,” claimed to believe that Jesus is God – but only after they had refashioned Jesus to look more or less like themselves. He makes an intriguing statement:

That is profound. “They think desperately low of God.” How did Machen arrive at that conclusion? He maintained they had diminished the holiness of God by lessening the gravity of sin:

He [Jesus] did not say: “Trust me to give you acceptance with God, because acceptance with God is not difficult; God does not regard sin so seriously after all.”2Machen, J. Gresham. Christianity & Liberalism (Kindle Locations 1143-1145)

We see this attitude played out in various ways in the church today. Rob Bell, William Paul Young, Brian McLaren and others promote universal salvation. God is love after all, and your sin isn’t really so bad. God’s vast holiness isn’t part of their equation.

We have more and more Evangelical leaders accepting, embracing and endorsing same gender sexual engagement, and now many include it in the category of “marriage.” Love and commitment to a relationship is what is important; people should act on what they feel is right. This of course redefines sin out of existence, since most (or all) sin can “feel right” and be easily justified in the eyes of sinners.

Homosexuality is far from the only sin that has been redefined in our time. Heterosexual co-habitation and immorality are very widely accepted today. Society is led to believe murder, violence, envy and theft do not arise from the fallen human heart, but from poverty, societal ills, and the unfair nature of life. “It’s not their fault.” “Undesirable behavior” is completely understandable, excusable, and no big deal to many. Everything you do is just A-OK with their little god, which is a good thing, since this god’s arms are far too short to box with you.

This idea of a “little god” plays itself out in the Word Faith and New Apostolic Reformation movements as well. Give in to your greed and desire for material stuff. Name it and claim it. God wants you to be happy and after all, you have within you the same creative power He has! Cool! As Kenneth Copeland so happily reports, God Himself needed faith to create and spoke “faith-filled words” to create the universe. When He created Adam, He purportedly (according to Copeland) created an exact duplicate of Himself. A being, Copeland says, about 6 foot tall, a couple hundred pounds more or less, and when they are standing side by side you couldn’t tell the difference! Whoa! Either we are really BIG or God is very small. Yes, Word Faith teachers have a very low view of God.

Then we also have the “heavenly tourism genre,” with folks claiming they have been to heaven and back. Some have even described having water fights with Jesus. How does this “playmate Jesus” measure up with the Jesus of Scripture? The apostle John fell down as dead when he saw the powerful and fearsome glorified Christ in heaven. (Rev 1:12-18) The Lord was very gracious and reassuring to John on that occasion, but he didn’t hand him a squirt gun!

Machen’s response to those who have such a low view of God is clear:

Jesus presented the wrath of God in a more awful way than it was afterwards presented by His disciples; it was Jesus – Jesus whom modern liberals represent as a mild-mannered exponent of an indiscriminating love – it was Jesus who spoke of the outer darkness and the everlasting fire, of the sin that shall not be forgiven either in this world or in that which is to come. There is nothing in Jesus’ teaching about the character of God which in itself can evoke trust. On the contrary the awful presentation can give rise, in the hearts of us sinners, only to despair. Trust arises only when we attend to God’s way of salvation. And that way is found in Jesus. Jesus did not invite the confidence of men by a minimizing presentation of what was necessary in order that sinners might stand faultless before the awful throne of God. On the contrary, he invited confidence by the presentation of His own wondrous Person. Great was the guilt of sin, but Jesus was greater still.3Machen, J. Gresham. Christianity & Liberalism (Kindle Locations 1145-1151)

I was struck by the concept of standing “before the awful throne of God,” not because God is “awful” in the sense of evil, mean and vindictive but because His holiness stands in such stark contrast to our sinful unworthiness. God alone set the standard for goodness and holiness, right and wrong – He does not bend His truth to accommodate Himself to our pitiful standard of “doing what is right in our own eyes.” And yes, He does love us, and so has, in His love, provided a way of forgiveness and salvation for men and women who place their trust in Jesus. Without the cleansing provided for those who call on His name, we would shrink away in fear and shame – lost with no hope. The truly awesome and holy God almighty is not someone we find in the Word faith, Universalism, or NAR camps. We don’t find Him in someone’s fantasy tour of heaven. However, we do find Him in the description of a true prophet, Isaiah:

“Holy, holy, holy is the Lord of hosts; the whole earth is full of his glory!”

And the foundations of the thresholds shook at the voice of him who called, and the house was filled with smoke. And I said: “Woe is me! For I am lost; for I am a man of unclean lips, and I dwell in the midst of a people of unclean lips; for my eyes have seen the King, the Lord of hosts!”(Isaiah 6:1-5)

The utter greatness and holiness of God was eye opening and overwhelming to Isaiah. What is it that gives us confidence to stand before such a holy and perfect God? I think Machen expresses the real answer. It isn’t minimizing God that closes the gap but that Jesus:

…invited confidence by the presentation of His own wondrous Person. Great was the guilt of sin, but Jesus was greater still.Ω