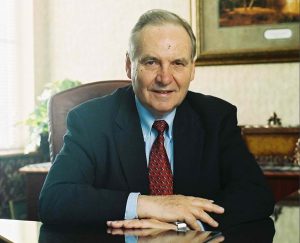 The man who has been called the greatest living Christian apologist has gone home to his great reward.

He has been called “Stormin’ Norman” by some, I suppose, because the man simply did not give an inch when it came to the historic Christian faith. Inerrancy, the bodily resurrection of Jesus, the virgin birth, these were immovable bulwarks of Christianity. He was prepared to lose money, power, or position to defend what he thought was right. It was something to behold.

If you are thinking that this somehow translated into an irascible, belligerent person you couldn’t be farther from the truth. I never once heard him raise his voice to an opponent in a debate or student. He was what Os Guiness has called an “Impossible Person” unyielding in his convictions but winsome and compassionate to his adversaries. Just don’t disrespect the Dallas Cowboys 😉

Geisler served as the first president of the fledgling Southern Evangelical Seminary. He showed his commitment to it by forfeiting his paycheck when funds were low. I attended the seminary when I was 23 years old, full of idealism and utterly bereft of wisdom.

I don’t remember what brought me into Dr. Geisler’s office the first time, but I bet it had something to do with the insane number of classes I signed up for. Norm gently reminded me that an extreme academic load meant I was just taking classes, not learning. He was right. (I dropped a class the next day) While he had me in the room, we had our longest talk. He asked about my future plans. I wanted to be a military chaplain, but the Navy rejected me for health concerns.

Something prompted me to tell him about my experience in a hermeneutics class. I said, “I feel like a lot of intractable debates over Biblical interpretation are more philosophical than theological and can only be solved at the level of philosophy.” Norm nodded sagely and said something to the effect of “So, what are you going to do about that?”

I’d considered pursuing philosophy, but I feared I lacked the mental chops to cut it. “I guess I should study philosophy even if I eventually go back to theology,” I said.

I expected encouragement; I did not expect  his response: “Great. I think you should study philosophy. I’ll write you an letter of recommendation to wherever you want to apply.” I was speechless for a moment. The great Norman Geisler–the man who almost singlehandedly birthed Protestant Thomism – thought I had what it took to study philosophy. I didn’t get the impression he encouraged all students to pursue philosophy. He genuinely thought I had the aptitude. I remember saying something about trying to discern whether it was God’s will for me to go to grad school or to work as a pastor. I was searching for what Henry Blackaby called “where God is working” and Gary Friesen called pejoratively “The Dot” at the center of God’s will. I feared  if I got this wrong I would not prosper and God would not bless my pursuits.

As I rambled on, Dr. Geisler shook his head. ” I think you’re looking at this the wrong way.” He patiently, but firmly, destroyed my assumptions about the will of God.

“How do I find God’s will then?” I said after weathering his critique. In my memory, he leaned back in a chair by a wall of floor-to-ceiling file cabinets containing a lifetime of research. “Jon, I think you find God’s will for your life in the scripture. You are doing God’s will when you follow his commands and seek his kingdom. As to your vocation, if you have a desire to learn philosophy and wise people agree that you have the aptitude, then that’s all the confirmation you need. So what can we do to get you in a philosophy program?”

That conversation changed the trajectory of my life. I changed my 5 year M.Div degree to a shorter  M.A. and applied to a dozen philosophy grad programs. Geisler wrote a letter of recommendation. I never saw what he wrote but it must have been good. I was accepted in a great program (University of Mississippi) and went on to one of the top Applied Ethics PhD programs anywhere.

That was the longest conversation I had with Norm Geisler, but it wasn’t the last. When my life was in shambles for personal reasons, Dr. Geisler saw my turmoil and sent a letter gently ordering me to get some counseling. I needed that push just like I needed the push to study philosophy.

I am grateful to Norman Geisler for those firm but compassionate pushes, and I will miss him. I think the first verse I ever heard Dr. Geisler read was 1 Peter 3:15 and it is a fitting epitaph for my memory of him.

But in your hearts honor Christ the Lord as holy, always being prepared to make a defense to anyone who asks you for a reason for the hope that is in you; yet do it with gentleness and respect.Ω