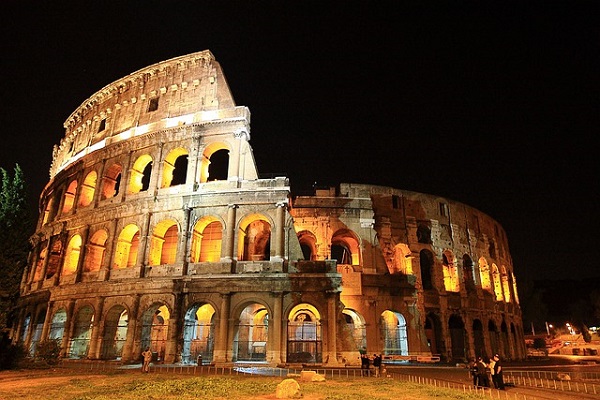 The First Century Roman Empire was pluralistic, relativistic, and very spiritual.  The Greeks and Romans shared about 15 or 16 gods and goddesses, worshipped under different names.1See “Greek Gods and their Roman Counterparts” for listing, descriptions, and comparisons In addition to their own deities, Rome would incorporate into their belief system the deities worshipped in newly conquered territories. PBS describes this in “The Roman Empire in the First City: Roman Gods”:

As the Empire expanded, it took control of new countries that had their own cultures and their own gods. In Egypt, Isis was a goddess of fertility; she was also a mother and a symbol of death and rebirth. She therefore combined the duties of several Roman goddesses, including Cybele, Aphrodite and Demeter.

The trade and travel that was integral to the Roman Empire made it easy for the worship of gods to spread abroad and Isis came to be worshipped across the Empire. In the same way, the Persian god Mithras was popular with the Roman legions – many of whose soldiers had served in Persia – and shrines to him have been found in Britain, Syria, and across North Africa. Such was the effect of a multicultural Empire that spanned continents and countries.

In 63 B.C. General Pompey entered and took over Jerusalem and, with it, Israel. The Jews were tolerated and allowed to maintain their beliefs and practices, but Rome was never happy with the Jew’s narrow-minded insistence that there was only one true God. Into that mix, the Church was introduced. Alvin Schmidt, in his 2001 book, Under the Influence: How Christianity Transformed Civilization, demonstrated the many ways the Church transformed a pagan, polytheistic, immoral culture over a 300-year period of time. The book’s description details how the barbaric pagan culture was transformed by the influence of Christianity. Christians are credited with:

Some would argue that since this book was written by a Christian, the book is biased and therefore little more than religious propaganda. Those who make this assertion demonstrate little knowledge of history. However, we are not solely dependent on Christian sources to delineate the vast changes made upon culture by Christianity. Historian and atheist, Tom Holland, also demonstrates that the origin of Western culture derives from the influence of the church on the Roman Empire in his book, Dominion: How the Christian Revolution Remade the World. In reviewing Tom Holland’s book, Jonathon Van Maren reveals the same history Alvin Schmidt pointed out:

How did we get from there to here? It was Christianity, Holland writes. Christianity revolutionized sex and marriage, demanding that men control themselves and prohibiting all forms of rape. Christianity confined sexuality within monogamy. (It is ironic, Holland notes, that these are now the very standards for which Christianity is derided in modern times.) Christianity greatly elevated women. In short, Christianity utterly transformed the world.

In fact, Holland points out that without Christianity, the Western world would not exist. Even today’s “social justice warriors” who despise the faith of their ancestors, rest their ideals on the foundation of Judeo-Christian values. Those who make arguments based on love, tolerance, and compassion are borrowing fundamentally Christian arguments. If the West had not become Christian, Holland writes, “no one would have gotten woke.”

From Here Back to There?

The abolition of Western Culture’s moral values and ethics has been an ongoing and progressive process over the past 150 or more years. Those who would abolish true Christianity demand that our faith be reimagined to conform to their relativistic beliefs – with the end goal that Christianity if it survives, must affirm and embrace all truth claims as being equally true and valid. In other words, their goal is nothing short of a return to pre-Christian times with pre-Christian beliefs, behaviors, and practices.

The 2022 release of The State of Theology exposes how effective the movement has been in its attempts to abolish Christian belief and the Western culture upon which it was based, in society and even within the church. Currently, nearly 50% of people in culture and in the Church are now functionally Panentheististic. This is apparent in the response to the question, “Does God Change?” Nearly half within and without the church say yes! The Panentheistic view of God is explained by The Routledge Encyclopedia of Philosophy Online:

In panentheism, God is a person who includes the universe, or a soul whose body is the universe. Thus, God is larger than but also like the persons we know: physically embodied in a finite material object, growing older through time and changing as his material parts change. Panentheists claim that even so, God is perfect, because persons are the acme of perfection.2The Definition of Acme is, “the highest point or stage.” Even though God and humans are growing and changing, both are always at the highest point of perfection

This alone helps to explain how Contemplative Prayer and the Enneagram have become so widespread in the evangelical church. While the survey notes that the majority of evangelicals will affirm there is one true God, nearly 50% are Panentheistic in their view of that God. As it happens, Panentheism is also the theology of Richard Rohr and perhaps reveals how widespread his influence has been on the evangelical church using both Contemplative Prayer and the Enneagram. This aberrant panentheistic view of God also teaches that God accepts the worship of all religions and that at the core, there really is no difference. The State of Theology posed the statement (Statement No. 3):

God accepts the worship of all religions, including Christianity, Judaism, and Islam.

In 2022, 56% of evangelicals agreed with the statement. Two years earlier, in 2020, that percentage was 43%, showing a huge slide in Christian belief that Jesus alone is the truth, and no one can come to the Father except by Him. The survey also shows the theological confusion among evangelicals on their view of Jesus in Statement No. 7:

Jesus was a great teacher, but he was not God.

Jesus is the first and greatest being created by God.

Are those Christians whose faith is shown to be so incredibly compromised intentionally rejecting God? Perhaps. It could as well be that they lack sound biblical teaching and are unable to distinguish between biblical theism and Panentheism. Or, and this seems quite plausible, it may be their faith has been compromised out of their desire to be accepted by the growing pagan culture in which the church and its members now reside – a culture that is increasingly hostile to all of Christianity’s core beliefs. Whatever the reason, it is plain to see that a growing segment of the church today is trading fidelity to the richness of the word of God for the pottage of paganism.

It seems Paul was describing the days we are moving toward in 2 Timothy 3:1-7:

But understand this, that in the last days there will come times of difficulty. For people will be lovers of self, lovers of money, proud, arrogant, abusive, disobedient to their parents, ungrateful, unholy, heartless, unappeasable, slanderous, without self-control, brutal, not loving good, treacherous, reckless, swollen with conceit, lovers of pleasure rather than lovers of God, having the appearance of godliness, but denying its power. Avoid such people.  For among them are those who creep into households and capture weak women, burdened with sins and led astray by various passions, always learning and never able to arrive at a knowledge of the truth.Ω