Joe Scarborough, Heretics and the Gospel 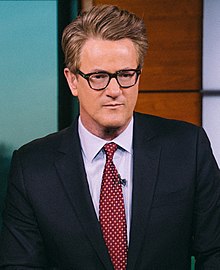 “As a Southern Baptist, I grew up reading the Bible – maybe a backslidden Baptist, but I still know the Bible.”

It may well be that Scarborough has, at some point, read the Bible, but it is difficult to know if he understood or could identify the context of what he was reading. It is also unclear how being “backslidden” at this point in his life has improved his biblical knowledge in any meaningful way. It is certainly not apparent that he understands the ministry of Jesus or the gospel. Scarborough continues to demonstrate his biblical chops:

Jesus never once talked about abortion. Never once, and it was happening back in ancient times. It was happening during His time, [and he] never once mentioned it…people perverting the gospel of Jesus Christ down to one issue, it’s heresy. …if you don’t believe me, if that makes you angry, why don’t you do something you haven’t done in a long time. Open the Bible, open the New Testament, read the red letters – you won’t see it there…

It is tempting to launch into a full-blown defense of the pro-life position. We have written on that in the past in “Do Humans Have Rights That Can Be Violated?,” “Human Rights? Only for Some Humans,” and several other articles. Quite a few pro-lifers have responded to Joe Scarborough’s comments by accurately delineating the pro-life position taken by Christians down through history. Still, we want at this point to take on Scarborough’s actual claim and see if it holds water. He claims that the word abortion is not in the “red letter words” of Jesus, and Jesus never outlined His position on abortion for the written record. Therefore, according to theologian Joe, pro-life Christians are heretics, “perverting the gospel of Jesus Christ down to one issue.”

The old canard that Jesus didn’t directly comment on this or that issue during His earthly ministry demonstrates that the person making this claim knows little about reading the scriptures within their historical-grammatical context. There are indeed many things that were being practiced by what first Century Jews viewed as “pagan culture,” which are not recorded in Matthew, Mark, Luke, or John. These writers also did not record Jesus condemning Romans for their practice of abandoning their newborn infants, leaving them to die in the outdoor elements. If the family had too many mouths to feed, if the gender of the baby wasn’t what they’d wanted, or if the child was born with a deformity or other imperfection, the Greco-Romans might just leave them in the woods to die. As “Roman Exposure of Infants” points out, two groups did not accept this practice; “the ancient Jews and Etruscans.” It may also be news to Joe Scarborough that Jesus was a First Century Jewish Rabbi and didn’t make a habit of commenting on behaviors and practices of the pagan cultures around them, which the Jews were not practicing in His day. First Century Jews considered innocent life innocent and not subject to capital punishment, and this protection applied to the newborn and those near birth.

In addition, Jesus claimed to be God – none other than Almighty Yahweh of the Old Testament – and proved His claim by resurrecting His own body three days after He was crucified. As God, He had spoken on this issue in the Mosaic Law revealed to God’s people through Moses. Jack W. Cottrell does an excellent job on this issue in his 1975 article, “Abortion and the Mosaic Law.” Cottrell’s primary emphasis is addressing Exodus 21:22–25:

When men strive together and hit a pregnant woman, so that her children come out, but there is no harm, the one who hit her shall surely be fined, as the woman’s husband shall impose on him, and he shall pay as the judges determine. But if there is harm, then you shall pay life for life, eye for eye, tooth for tooth, hand for hand, foot for foot, burn for burn, wound for wound, stripe for stripe.

Some try to explain that the focus of the “harm” done in this passage is to the pregnant woman only, and the infant is given no consideration as a “person” being harmed. Some translations present the notion that the above passage merely referenced a “miscarriage,” causing loss to the woman as a result – rather than a premature birth, leading to the unwarranted injury or even death of an innocent tiny person. In actuality, God is describing a premature birth, and the consideration of “harm” is for the mother and newborn child in the text:

Another reason for thinking that Exodus 21:22 refers to a premature birth and not to a miscarriage is that there is a Hebrew word, shachol, that specifically refers to the event of miscarriage. (In some cases it means “to be bereaved.”) This word is used in Exodus 23:26 and Hosea 9:14, where it refers to miscarriage among human beings. In Genesis 31:38 and Job 21:10, it refers to animals, and in Second Kings 2:19, 21 and Malachi 3:11, it refers to land and plants that do not produce mature fruit.

Thus there seems to be no warrant for interpreting Exodus 21:22 to mean “the destruction of a fetus” (Waltke). The expression used is indicative of nothing more than the birth of a child. The irregularity of the situation is the fact that the birth is prematurely and maliciously induced. The second point I wish to defend is, as stated above that any injury to the child no less than to the mother would demand the application of the lex talionis.

Simply because Jesus’s words spoken in the Old Testament through Moses before His earthly incarnation – do not occur in the red letters of the New Testament doesn’t mean He hasn’t “spoken” on this question. It is very important for progressives to completely divorce Jesus in the New Testament from the seemingly – in their mind – hyper-judgmental Yahweh of the Old. But Jesus said plainly that “I and the Father are one” and that those who have seen the Son have “seen the Father.”  When One of the persons of the Godhead speaks, God indeed has spoken.

What is more troubling than Joe Scarborough’s judgmental characterization of pro-lifers as single-issue heretics is his demonstrated biblical illiteracy regarding the identity of Jesus as Yahweh. If Jesus is not Yahweh of the Old Testament, as He claims to be, what power has He to save all the people that believe in Him? Even if a perfect man could possibly take the eternal punishment for one imperfect man, thus sparing that one man from judgment, his one righteous life could certainly not pay the punitive ransom to redeem billions of unrighteous people. For anyone who might not know, we are all sinners. Taking an innocent life, lying, worshiping false gods, stealing, engaging in sexual immorality, oppression of the poor, envy, and many other behaviors spelled out in the Old Testament Law is sin. The wages of sin – what we deserve for our actions in this life – is death (eternal separation from God), but God’s free gift is eternal life in Christ Jesus our Lord. (Romans 6:23)

Not one person has the ability to save him or herself by doing good works or by “being good” and “trying very hard” to earn God’s mercy. We have all sinned and come short of the glory of God. (Romans 6:23) God does not grade on the curve by judging us as to be “at least better” than some other people but grades us against His perfect righteous standard as revealed in the law. But desiring to save us, He sent His son to keep the law on our behalf and to die – to pay the penalty for all of our sins with His own infinite life. Jesus counts our faith in His sacrifice as if we had lived that perfect life ourselves. We are literally given His righteousness – if we are willing to accept it. In this way, God could be both perfectly holy and just, yet merciful to sinners who place their faith in His perfect Son’s sacrifice.

Scarborough helpfully suggests that pro-life Christians do something they have not done in a long time – read the Bible. We take no offense and will lose no sleep over a comment like that. The problem is that he might sound credible enough with his “red-letter” argument to persuade people who do not know anything or very much about Bible doctrine, possibly even some believers.

Christians are imperfect in this life. So, believers can be wrong about a lot of things or even have iffy theology in some areas, but we must not be wrong about Who Jesus is or what the gospel is. That error has eternal consequences. Scarborough claims he was raised a Baptist. Suppose it was a good church, as many Baptist churches are. In that case, we think perhaps that Joe Scarborough might be able to recall hearing these essential truths in the church of his youth and reconsider his current shallow understanding of the Bible – which he claims to know so well. We don’t know, but we truly hope so. God is not willing that any should perish, but all should come to repentance. (2 Peter 3:9 KJV)Ω