Michael Brown and the False Prophets 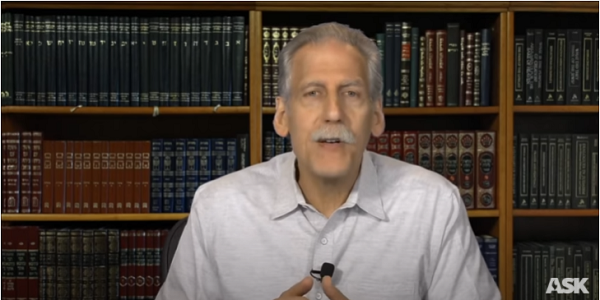 We are not questioning his credentials as a scholar or his work in addressing social issues like transgenderism. We also are not here addressing the rather controversial issue among Christians of cessationism1the belief that the sign gifts which began in Acts 2 have ceased vs. continuationism.2the belief that the sign gifts in Acts 2 have continued and are still active in the church today As important as these issues are, they have no direct bearing on the issue of false prophets except that false prophets tend to inhabit and ascend to almost Rock Star celebrity status within Pentecostal circles. What we are addressing is this – since continuationists affirm that the office or calling of a prophet is valid today, they are responsible to hold such self-identified prophets accountable to the biblical tests which have been given directly and clearly by God to determine whether this person is a true prophet or a false prophet. There are many very prominent and celebrated men and women claiming to be true prophets of God today that are giving easily recognized false prophecies with no accountability whatsoever.

In his video explanation of “Who or What Is a False Prophet?” Dr. Brown agrees that the death penalty was to be administered at the hands of the people. Biblically, this was such an important issue that God gave explicit and assuredly heart-breaking instructions even to the parents of such individuals:

Because of the appalling seriousness of this crime against God, parents who undoubtedly loved their sons and daughters and would probably in most circumstances have given their own lives to protect them were commanded to pronounce judgement on him and actually stab him when he prophesied.

The false prophet obviously would have attempted to escape the penalty though, by fleeing and denying he was a prophet at all, while lying about the nature and circumstance of the wounds he suffered:

“On that day every prophet will be ashamed of his vision when he prophesies. He will not put on a hairy cloak in order to deceive, but he will say, ‘I am no prophet, I am a worker of the soil, for a man sold me in my youth.’ And if one asks him, ‘What are these wounds on your back?’ he will say, ‘The wounds I received in the house of my friends.’ (Zechariah 13:4-6)

True Prophets wore rough (hairy) clothing, so false prophets did the same in order to deceive the people. But once outed and injured for giving false prophecy, the false prophet would attempt to deny and hide their shameful identity.

In “A Strong Appeal to Those Who Prophesied Trump’s Reelection,” which was posted on January 21, 2021, Dr. Brown gives a synopsis of these numerous modern day false prophecies and writes to the so-called prophets, “What you prophesied did not come to pass.” He continues,

There is not an alternative, spiritual reality in which Trump is still functioning as president.

Nothing is going to change in a month or a year.

Even if there was massive electoral fraud, the results of this election will not be overturned.

Donald Trump will not serve a second, consecutive term.

Face the facts, be accountable before God and man, take the hits that will be coming, and humble yourself before the Lord and His people.

If you prophesied falsely, you and you alone are to blame.

Dr. Michael Brown’s arguments here are completely true and quite valuable, as far as they go. Unfortunately, Dr. Michael Brown goes on to make excuses for these prominent false prophets and concoct a series of spiritual myths to diminish the seriousness of their violation of God’s commands. He fancifully suggests the false prophets may not have intended to mislead and may have been “acting in sincerity and integrity, truly believing the Lord had spoken.” Biblically, we do not find these to be mitigating circumstances at all. The test is simple and understandable. Give them a “T” (true) or give them an “F” (false) if they give a single false prophecy. We do not live in a theocracy and therefore do not carry out capital punishment for offenses such as adultery, incest, or false prophecy, of course, but would Dr. Brown tolerate someone engaged in adultery, fornication, or child molestation in a leadership position IN THE CHURCH? If not, why not? Following the same course as Brown, couldn’t the adulterer or child molester just appeal to their Christian “sincerity” and perhaps defend their basic “integrity” by offering the popular “you can’t help who you love” defense or something similar – and be back in the pulpit the very next Sunday?

Dr Brown can only be viewed as being an apologist for false prophets, when he clearly knows they have concocted and promoted serious false prophecies. Dr. Michael Brown goes so far as to introduce two more categories of New Testament prophets in his presentation “Who or What Is a False Prophet?”. In addition to true prophets and false prophets he introduces:

Dr. Brown gives an example of someone giving him a “prophetic word” and states that, “some of it was right and some of it was wrong.” Starting around minute marker 27 of “Who or What Is a False Prophet?” Dr. Brown equates the prophetic word he was given with a circumstance found in Acts 21,

This is what happens in Acts 21. This is what happens there. That Agabus prophesies what is going to happen to Paul and others urge him by the Spirit and say, don’t go, don’t go. The Spirit was saying this is what is going to happen. Others thought by the Spirit well, he shouldn’t go. They, they, misunderstood. They interpreted the warning their way. There was a real warning spoken, now they interpreted it to stop Paul going to Jerusalem.

Paul was told by Agabus the prophet what he (Paul) would suffer in Jerusalem. The account is in Acts 21:10-14. There is nothing in the text of Scripture which states or implies that Paul’s traveling companions or others who were with them urged Paul “by the Spirit” not to go to Jerusalem! As friends who loved him, they tried to dissuade him from making the trip, but that was motivated by their concern and anxiety, not “by the Spirit.” God is not the author of confusion. The Spirit would not have told one prophet one thing and then turn around and tell other prophets to thwart the prophecy He gave. If they had managed to thwart the prophecy, they would have made God a liar! They also would have been making a false prophet out of true prophet Agabus, a terrible miscarriage of justice. God wanted his people to fully understand that He Himself was speaking through His prophets. Is our God a trickster or confused as were the supposed “deities” of the pagans? Absolutely not! Brown’s argument fails because his assertion that Paul’s companions were prophesying “by the Spirit” is neither explicit or implicit in the text, and is not at all biblical, but merely a fanciful spiritual myth.

What about Brown’s category of “those who prophesy falsely”? This person is, according to Dr. Brown, to be judged on their “intention to deceive,” and not on the matter of accuracy. If this is true, then it seems God really needs to issue an addendum notifying the church He inadvertently left out the important element of “intent” in the Scriptures, while leaving His people to think it was, as is spelled out in Deuteronomy, about accuracy. But IF it is all about “intent” we will certainly need God-like powers to determine another person’s “intent.” That is clearly an impossibility. We cannot determine either motive or intent, for these are issues of the heart, hidden to men.

The other option is that Dr. Brown is misrepresenting the word of God in defense of those he regards as friends – and perhaps to protect Pentecostalism. To achieve his goal, he negates the biblical test to give them a “T” or “F” based on their teachings about God or the accuracy of their prophecy. But as we cannot judge motives any more than Dr. Brown can, we can only expose the false premises he is taking refuge in and leave the “intent” to God.

As we suspect might be true of Dr. Brown, we take no pleasure in criticizing others and have zero animus towards him. No one is perfect nor will be perfected in this life. Dr. Brown talks about the importance of being open to correction. We agree. We would respectfully ask that Dr. Brown repent of his defense of these false prophets and false teachers, adding fanciful ideas to the word of God in the process – and publicly call for the removal of the false prophets from their pulpits, the same as we would expect him to do if these popular teachers were engaged in adultery, sexual immorality, or other grievous sin. False teachers are said to be “deceived and being deceived” at the same time. (2 Timothy 3:13) Just as the JW who comes to your door is deceived himself and is a deceiver of the unwary, so are most false prophets and false teachers. We live in the age of grace, so we likewise call on those giving false prophecies/false teachings to realize how serious an offense they are engaged in, and the harm they are causing to their followers and to the collective people of God, and likewise repent.

There are many Christians who have been deceived by these popular teachers. They deserve to know that prophecy is and always has been a very serious calling and claiming to have that calling when you do not, and giving false prophecy is a very serious offense. And no one should assume that true Christians cannot be deceived because they most certainly can be, which is exactly why there are so many warnings (given by Jesus and the apostles) about taking care not to be deceived. Sadly, many have bought into the falsehood that a genuine prophet of God may give both true and false prophecies or so-called “words from the Lord.” If a self-appointed “prophet” is wrong a certain percentage of the time, but seems “sincere,” it is felt by many to be no big deal. No, the biblical criteria for prophets is 100% accuracy. These Christians deserve to know the truth and deserve to be taught exactly how a true prophet of God is to be known to them, as opposed to a usurper. And by the way, false teachers can be found in any church or denomination. This is not just a “Pentecostal problem,” by any means.

But false prophets also arose among the people, just as there will be false teachers among you, who will secretly bring in destructive heresies, even denying the Master who bought them, bringing upon themselves swift destruction. And many will follow their sensuality, and because of them the way of truth will be blasphemed. And in their greed they will exploit you with false words. Their condemnation from long ago is not idle, and their destruction is not asleep. (2 Peter 2:1-3)Ω