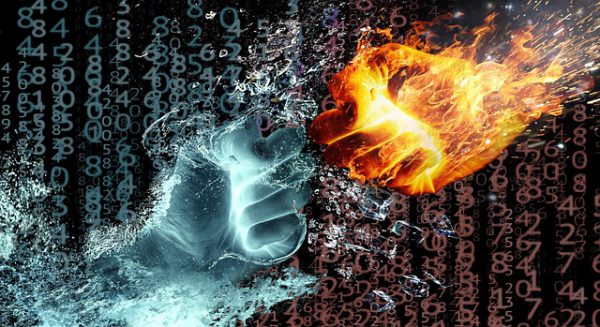 Image by Omni Matryx from Pixabay

Which dogma “Lives Loudly” within you?

Regardless of who you are or what you believe, you should know that we all have a “dogma” that determines how we live our lives. (A “dogma” is more commonly referred to as a worldview, and everyone has one.)

Atheists like Karl Marx had a clearly defined dogma that sought to expunge God from society and establish an all-powerful State as the god of the People — with proletariat “elites” at the helm.

The dogma of secular humanism is simply the exaltation of “self” above every other dogma, minus the inalienable rights, moral absolutes, and personal restraints.

The difference between the dogma of Karl Marx and the dogma of Biblical faith is that the former seeks to impose itself on everyone by any means necessary — including coercion and intimidation — and ultimately by force. (Lest we forget that “the road to hell is paved with good intentions.”)

The dogma of Biblical faith is the exact opposite. It seeks to shine a light into the darkness of humanity in order to show that even our best intentions often produce tragic consequences apart from God’s plans and purposes for us.

And unlike the followers of Karl Marx, followers of Jesus don’t need to use tactics like coercion, intimidation and force to lead people out of spiritual darkness and into the light of God’s grace. Love has always been the motivating factor, and love should always be the goal.

Those who adhere to the dogma of Karl Marx express his dogma very LOUDLY and are relentless in trying to silence anyone who rejects it or even questions it.

And as history has repeatedly shown, they will eventually bludgeon people into submission until they either change their minds or forfeit their lives.

You don’t believe in God?

But why mock those of us who do?

Which begs an even bigger question…

Why don’t atheists mock and ridicule people who worship a multitude of generic gods, like the pagan gods of unadulterated hedonism?

Or the impersonal “cosmic consciousness” that allegedly permeates all of creation — in effect making “everything” God — including us?

Or the nebulous “higher power”? (And please, let’s not personify the universe — it doesn’t act on our behalf one way or the other.)

Or the “spiritual but not religious” gods of people’s vivid imaginations?

Is it because they’re far less judgmental than we are, and we can mold them into an image that we’re comfortable with?

Or is it because they don’t require anything of us and that we’re not ultimately accountable to them — or to “it”?

It doesn’t really matter, because false gods only exist in someone’s imagination.

I’m talking about the true and living God — the Creator of all that exists, including you.

The God that you will one day stand before to give an account for how you lived your life; and I assure you, you won’t be mocking Him then.

I believe Jesus is who He claimed to be — the perfection and reflection of the living God clothed in human flesh. And I’m much more concerned about what He thinks of me than what you think of me.

And because He lives, those who know Him will also live, because death has been defeated.

Yeshua’s words also describe the human condition in graphic detail, which explains the hostility that many people have towards Him.

“And this is the condemnation: that Light has come into the world, but people loved darkness instead of light because their deeds were evil. Everyone who does evil hates the light and will not come into the light for fear that their evil deeds will be exposed.” (John 3:19-21)

To leave no room for ambiguity, I need to emphasize that when we think of evil, we generally think of it in terms of degrees, which inevitably leads to our descent down the slippery slope.

For instance, if someone from a hundred years ago suddenly appeared on the scene today, they would obviously be amazed by our technological advances — but they would be absolutely horrified by how our society has embraced behavior that was universally condemned as vile, wicked and so obviously evil during their era — and every era that preceded it.

You might respond by saying, “that’s because people back then weren’t as enlightened as we are today,” or something along that line of reasoning.

The problem with that kind of reasoning is that it entices people to embrace behavior that erodes our society, rather than strengthening it.

To illustrate my point, a few examples should suffice.

1. When we have to invent euphemisms to try and make evil seem less evil, that’s a clear indication that we’re sliding down the slippery slope.

Killing pre-born babies by the millions and calling it “women’s healthcare” and “reproductive rights” doesn’t change the reality of what it really is; it merely doesn’t sound as bad as saying that “a woman has the right to kill her baby in the most barbaric and inhumane way that she  chooses.” (Out of sight, yes — but not always out of mind.)

2. Embracing and celebrating the most deviant kinds of sexual perversion, while denying basic biological realities in favor of subjective feelings that can change day-to-day.

3. Amputating healthy body parts and replacing them with artificial, non-functional ones because you felt like you were born in the wrong body; and then trying to live your life as the opposite sex that you’re not would’ve been regarded as a bad script for a horror movie less than a century ago. But today people can be heavily fined and/or imprisoned for calling it what it is — an evil ideology that’s based on feelings rather than facts; and a rejection of scientific research and evidence that completely contradicts the narrative that’s being forced upon us by moral relativists who have no morals.

4. Trans-humanism. Most people aren’t even aware of what that is, let alone the implications of it. But again, fifty-years ago, these things would’ve been considered a script for a really creepy horror movie.

For many people who are aware of what’s happening in the field of trans-humanism, it is a really creepy horror movie.

An important point to ponder:

Bad behavior doesn’t become good behavior just because people have become used to it and are more accepting of it until they’ve lost the ability to distinguish between the two; and evil doesn’t become any less evil because we’ve become immersed in it for so long that our conscience has been conditioned to accept something that we know is evil, but our lack of discernment and our fear of being “cancelled” if we call it evil has produced a generation of evil people who promote evil ideologies and mistakenly think that they’re enlightened.

(If you’ve read this far, I would encourage you to read a passage in the Bible that describes what I’m saying much better than I can. It’s Romans chapter 1, verses 18-32.)

And lastly, when wisdom and understanding are denigrated, and ignorance and arrogance are exalted, history has an unfortunate way of repeating itself.

And for those of us who have studied history, that’s a terrifying thought.

For those who have ears to hear,
let them hear…and come into the Light.Ω