Who do you say that I am? 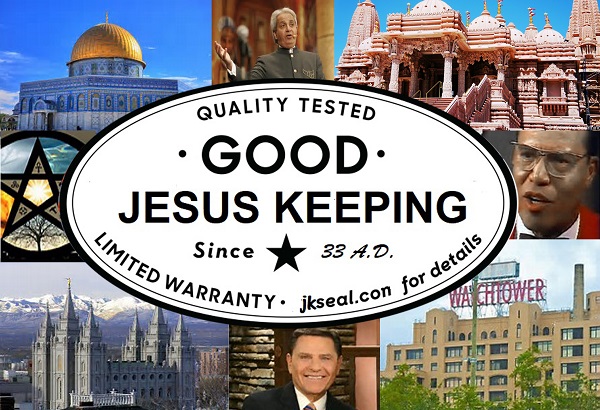 In Matthew 16:15 Jesus the Christ asks his disciples an all-important question with eternal consequences, “But who do you say that I am?” It was the follow-up question in an exchange we read in Matthew 16:13-18:

Now when Jesus came into the district of Caesarea Philippi, he asked his disciples, “Who do people say that the Son of Man is?” And they said, “Some say John the Baptist, others say Elijah, and others Jeremiah or one of the prophets.” He said to them, “But who do you say that I am?” Simon Peter replied, “You are the Christ, the Son of the living God.”

In this short interaction, we see a striking difference between those who know something about Christ but don’t know Him personally, and those Who know Him intimately and knew well His asserted identity. History is replete with many false teachers who hold up Jesus Christ as an idea but reject His deity and the clear biblical teaching about Who He is. For example, in the Fourth century, a church presbyter from North Africa by the name of Arius began to teach that the Son of God Who incarnated as the Messiah, Jesus, was not the eternal God, but came into existence at a point in time. This was the heretical view that led to the Council of Nicea where this theological error was addressed. The Early Church fathers took very seriously their mandate to guard the flock from false teaching.

A modern version which espouses this particular heresy is the group known as “Jehovah’s Witnesses,” who receive their instruction from the Watchtower Bible and Tract Society. Like Arius, they believe the Jesus Christ was brought into being at a point in time. Their belief is that Jesus was initially Michael the Archangel whom the Father created and then used to create everything else. At the time the Christ (Messiah) would be born into the world, Michael’s life force (they describe a “life force” as something like spiritual electricity which carries no characteristics of personality) was unplugged, at which time Michael ceased to exist. Their unitarian god Jehovah then created a new being to replace Michael – a human named Jesus – and plugged Michael’s “life force” into him.

When the human Jesus was crucified, his life force was “unplugged,” and as the Watchtower Bible and Tract Society teaches, Jesus is now “dead forever dead.” (It’s interesting that they talk about and write of Him as if He was still around, but their teaching is that there is no Jesus today and never will be again!) Jehovah than created another Michael to replace the previous Michael and the human Jesus, and stuck that very same life-force into this new creature.  It is all pretty complicated but provides a way to have a sort of Jesus without having to embrace the Jesus Christ of Scripture.

Mormons also don’t like the Jesus Christ of history and Scripture and promote a new and improved version. For them, Jesus (and indeed all of us) were born on another planet to a Mormon God and one of his multitude of wives. Jesus came to earth when a human body was prepared for Him, which afforded him the opportunity to earn godhood as his father, and all other gods before him had done. So again, we have a Jesus who didn’t exist in eternity past. Once he came into being, he progressed and changed. By definition then, the Jesus of Mormonism is not immutable, i.e, unable to change, and therefore is not the God of Scripture. He isn’t Jesus the Christ.

Neither of these examples are surprising. Most people, especially in Christian or formerly Christian cultures, have heard and believe that Jesus is an important religious figure. Therefore, nearly all false teachers feel the need to create a Jesus of one kind or another to enhance their credibility and persuade potential converts that they have a sort of Jesus Keeping Seal of Approval. Theirs is not the REAL Jesus, of course, but another Jesus who seems enough like Jesus to fool the uninformed masses.

A newer player on the block is Franciscan Priest, Richard Rohr. He is a leader in the Contemplative Prayer Movement and is the primary mentor to those who have brought the Enneagram into the evangelical church. He is also the defacto chief resident theologian for Progressive and some evangelical churches. He too has a Jesus, but his “Jesus” is not THE Christ, but melded with “the Christ” about 2,000 years ago. The Christ, far more of a “material manifestation,” (the Cosmos is the Christ), than a “person” in Rohr’s view, came into being about 14.5 billion years ago. This concept is foundational to all of his teaching, but for just a glimpse into it, you could watch “Fr. Richard Rohr – Cosmic Christ.” Beginning about the 4 minute mark he says:

To put it very concretely, the Christ is born the minute God decides to show Himself. The moment God decides to materialize. Now modern science would call that the Big Bang. The Big Bang is the birth of the Christ. 14.5 billion years ago. And this material manifestation has been revealing the glory of God, the nature of God, for at least 14.5 billion years. That’s the Cosmic Christ. So, in a moment of time, this Cosmic Christ is revealed to us in a human person that we could see and touch and hear and listen to and fall in love with. But in the first 2,000 years most of the work, except for the mystics, who largely got this, mainline Christianity Catholic and Protestant, has largely been concerned about Jesus the historical person. Which is good. But what we missed out on was the Cosmic Christ.

Here we experienced a definitional variation which we should resolve before we move on. Different esoteric groups define “the Christ” a little differently. For Gnostics and New Agers, “the Christ” is a “consciousness,” something which settled on the human Jesus and can also settle on us.

Rohr’s take is a bit different from typical New Age teaching on “the Christ.” A bit earlier in the video, Rohr does claim “the Christ” is eternal, but then, with a little sleight of hand he claims “the Christ” came into existence 14.5 billion years ago and is the creation itself. Rohr teaches that Creation was the first Incarnation of Christ. In his blog article, “Christ Since the Beginning,” Rohr writes:

God spoke the Eternal Blueprint/Idea called Christ,“and so it was!” (Genesis 1:9). Two thousand years ago marks the Incarnation of God in Jesus, but before that there was the Incarnation through light, water, land, sun, moon, stars, plants, trees, fruit, birds, serpents, cattle, fish, and “every kind of wild beast” according to the Genesis creation story ([Genesis]1:3-25). This is the “Cosmic Christ” through which God has “let us know the mystery of God’s purpose, the hidden plan made from the beginning in Christ” (Ephesians 1:9-10).

We repeat – The first Incarnation of “Christ” was Creation itself, according to Rohr. So, all Creation – including human beings – is in Christ and everyone and everything has “divine DNA,” as he informs his readers in his book, The Universal Christ. Since everyone is in Christ already, there is no need for salvation. What people need is to recognize their identity, to see themselves as the sinless beings they already are, which Rohr claims is their “true self.”

In Jewish and Christian understanding, the word Christ is the Greek equivalent of the Hebrew word, “Messiah” and both mean “anointed.” It isn’t a proclamation of who they are (like a name) but indicates they have been set aside for something. The REAL Jesus is the Son of God, Who incarnated or took on human nature. His “anointing” was to be the Savior of the world.

But I am afraid that as the serpent deceived Eve by his cunning, your thoughts will be led astray from a sincere and pure devotion to Christ. For if someone comes and proclaims another Jesus than the one we proclaimed, or if you receive a different spirit from the one you received, or if you accept a different gospel from the one you accepted, you put up with it readily enough. (2 Corinthians 11:3-4)

How would you answer Jesus’ question, “But who do you say that I am?” Your eternity hinges on your answer.Ω