Revisiting “A House Divided Against Itself” 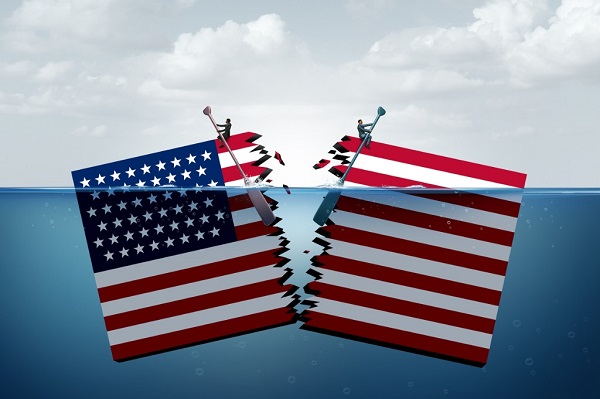 Seventeen years ago, right after the Bush v Kerry election, we wrote a journal article, “A House Divided Against Itself,” about the state of our nation. It was specifically about the yawning divide that had opened up between the two parties, or more accurately, between two dueling visions of what our nation should be and will ultimately become. It is almost eerie that the nation would – or even could – remain divided in about equal parts – about half and half in each camp. The divide rolls right through families, friendships, and even churches, leaving much interpersonal wreckage in its wake.

Seventeen years later, that divide is not only just as evident but more deeply and bitterly entrenched and even more destructive of relationships and long-established institutions. And it still stands about half and half. We are a nation deeply and almost equally divided – still. There was a time when liberals and conservatives had essentially the same worldview and saw the same problems but had different solutions. They would even defend each other’s right to disagree.

The battle is fundamentally a spiritual one. Who will control the nation’s morals is what is at stake, but the fight has reached almost a fever pitch since it seems even more now that long-held freedoms seem to be on the chopping block. Freedom of speech and freedom of religion are perhaps the two of these that cause the most friction. Will Americans be free to voice political or moral dissent without fear of being “canceled” or worse? Will Christian churches, say, still be able to preach and teach Christianity, or will Christian thought soon be equivalent to “hate speech?” Will riots and destruction continue to be unleashed upon people and institutions that disagree with the views of the mob? Might things now even take a turn for the worse? It was Abraham Lincoln, quoting Jesus (Mark 3:25), who said that “a house divided against itself cannot stand.” Our nation has obviously been standing divided for quite some years now, but it will not continue to stand if this course is not changed. It cannot.

Here’s a sobering thought: With both sides so angry at the other, will we be able to avoid another horrendous Civil War of brother against brother, kin against kin, and friend against friend, as we had in the 1860s? Anyone who is familiar with that bloody conflict will pray that we do not end up there.

Or is it possible while we are so divided that – perceiving an advantage in our disunity – another nation or group of nations might attack us, and we find ourselves too mutually alienated even to agree on how we should respond, much less successfully thwart or turn back such an assault? The words and warning of Abraham Lincoln in 1838 are just as poignant today:

At what point shall we expect the approach of danger? By what means shall we fortify against it? — Shall we expect some transatlantic military giant, to step the Ocean, and crush us at a blow? Never!–All the armies of Europe, Asia, and Africa combined, with all the treasure of the earth (our own excepted) in their military chest; with a Buonaparte for a commander, could not, by force, take a drink from the Ohio, or make a track on the Blue Ridge, in a trial of a thousand years.

At what point, then, is the approach of danger to be expected? I answer, if it ever reach us, it must spring up amongst us. It cannot come from abroad. If destruction be our lot, we must ourselves be its author and finisher. As a nation of freemen, we must live through all time, or die by suicide.1Abraham Lincoln Online, Lyceum Address, The Perpetuation of Our Political Institutions: Address Before the Young Men’s Lyceum of Springfield, Illinois; January 27, 1838

Will the world stand still for us until we get ourselves on the same track? That would be the polite thing to do, but no. As we commit suicide, it is safe to assume that other nations or blocs are already taking advantage of this gaping wound. By the sheer grace of God, most of us have lived our lives in safety and security, but can we assume that nothing will ever change that?

The divide cannot be attributed to mere policy squabbles between the parties. The bedrock of our society has always rested on our deep belief in God. Over the past decades, God has been asked to leave the schools and civic institutions, but now He is being all too often asked to leave the churches! Sadly, there is a deep apostasy descending on many churches of all denominations. Too many churches have let go of “the faith once delivered to the saints” (Jude 3), preferring fresh and shinier new teachings that bear little resemblance to the faith of our fathers. This abandonment of the true faith within the churches has caused real and serious repercussions in the culture.

The Judeo-Christian morality which shaped and guided Western culture for nearly 2,000 years is very quickly disappearing into the mist of the nation’s rearview mirror. As we pointed out in “Atheists Need Christianity,” even many atheists are concerned about what happens next once all moral restrictions are removed. A lawless society is not a safe place to live and certainly no place to raise children. Our nation’s understanding of freedom and our national submission to the rule of law over the rule of the mob is based in Holy scripture. Where the rule of law does not hold sway, totalitarianism always enthrones itself to fill the vacuum. What happens to a nation who abandons the very mechanism for a free and moral – and even diverse – society?

The moral and ethical restraints which preserved our culture for centuries are being replaced with a far more changeable, “follow your feelings” variety. Something which was wrong yesterday is decreed perfectly acceptable today and demanded to be celebrated tomorrow. And what was right yesterday is declared a “sin” today by the same people who cannot stand the very idea of sin as Christians define it, a moral offense against a Holy God. Why, after all, should some God be allowed to decide what is right and wrong – for me? A contemporary “sin” is and will continue to be – in the eyes of the mob – what the loudest (and often the most violent) voices declare it to be, and virtue is decided the same way. But don’t get too comfortable because both can be changed on a whim. Feelings rule everything, and feelings are fickle. Bad is good, wrong is right, down is up, and the value of an individual human being is way down.

We think it is at least possible that those who embrace these post-modern ideas today will eventually recognize, once “their side” is firmly in charge, the malevolent ramifications that may rapidly descend on any society without an unchanging moral restraint. Many might be horrified at the end result, just as so many Venezuelans awoke to a totalitarian nightmare of their own choosing that began with their election of Hugo Chavez in February of 1999.

The scripture says that “our battle is not against flesh and blood” – i.e., people, but against spiritual forces in high places. (Ephesians 6:12) Every human being is flawed, and every one of us is capable of being deceived. Don’t hate your loved ones “on the other side” or anyone, but pray for them that they may find peace with God and receive life eternal through their acknowledgment of the death, burial, and resurrection of His Son, Jesus Christ. The Apostle Paul said that God is not far from each one of us. (Acts 17:26-27) It’s not about one’s church or denomination and not about performing enough “good deeds” to earn God’s love and acceptance. Anyone who seeks the Lord will find Him. All one must do is believe and call upon Him. (Roman 10:9-13)

We took a trip down memory lane and were amazed to read this article, “A Nation Divided Against Itself,” written after the election of 2004, which first appeared in the Winter 2005 Issue of the MCOI Journal, and compared our thoughts at that time to our thoughts today, in 2022. The article may be rather long, it was originally in a print publication, but it is well worth the read.Ω