They Came from the Smoky Abyss 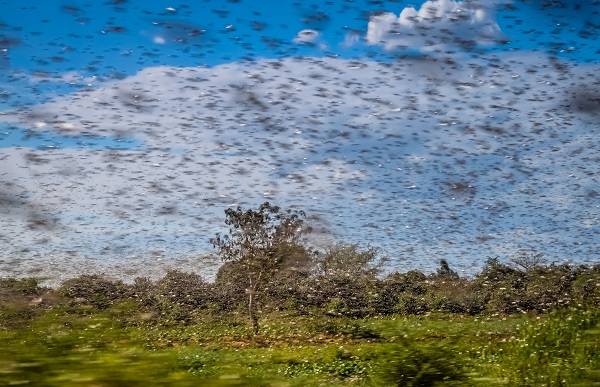 The title may sound a bit like a cheesy 1950s sci-fi movie, but it is truly a biblical concept.

One does not have to read much of Watchtower Society material to realize they are a group that abandons anything approaching the historical-grammatical context of Scripture. They do, however, have a systematic theology. That is, the Watchtower Bible and Tract Society (WTBTS), the publishing arm of the Jehovah’s Witnesses, systematically avoids biblical context, identifying their organization as the central character in the biblical story while casting God in the role of a mere supporting actor in their fairy tale. The Society’s attempts to cast themselves in the starring role of prophetic scriptures very often borders on the absurd. Just one brief example is their interpretation of the seven trumpet judgments in Revelation 8:6–9:19 and 11:15–19. The first two trumpet judgments are similar to the plagues God used against Egypt. The Scripture outlines those judgments:

The plain, normal reading of this text seems straightforward – and scary. However, the creative writers at the WTBTS headquarters took that Revelation text and twisted it into a bizarre story about their organization, alleging that these judgments refer to a JW convention held about a century ago in Ohio, specifically the dreaded Cedar Point Convention of 1922.

These represent proclamations of Jehovah’s judgments that have been publicized by Jehovah’s people throughout the time of the end, starting notably with the Cedar Point convention of 19221“Questions from the Readers,” Watchtower, 4/1/1990 p. 31

One might ask why this should be believed. It is simple, really, and they tell their followers in various of their publications, including the Watchtower Magazine of August 1960, they are God’s sole mouthpiece today:

The facts show that during this time and up to the present hour, the “slave” class has served as God’s sole collective channel for the flow of Biblical truth to men on earth. (Staying Awake with the “Faithful and Discreet Slave” The Watchtower, 7/15/1960 pp. 438-444)

The first four trumpet blasts expose the spiritually dead state of Christendom’s portion of “the earth” and ”the sea,” as well as the fallen condition of the clergy and Christendom’s spiritual darkness. Rev 8:7-12

So, we are all to believe these verses concerning horrendous judgments coming upon the earth are merely their own supposedly terrifying proclamations of doom made against “Christendom” and “the clergy” at their Cedar Point Convention of 1922! However, does any of this explanation sound at all like “hail and fire mixed with blood?” How about one-third of trees being burned up? A fiery mountain being thrown into the sea, which causes one-third of the sea to turn to blood, with one-third of ships sunk and a third of ocean life dying? However, the dreadful news for “Christendom” and “the clergy” does not stop there.

The fifth trumpet allegedly refers to locust-like JWs being released from the “abyss of inactivity” and spiritually “killing” Christendom by warning of her coming destruction. Really? Dear reader – just read the 8th and 9th chapters of Revelation for yourself and see if you find their explanations to ring true. We don’t. But then, we are free to disagree with Watchtower Society interpretations, which is something that no Jehovah’s Witness may do. Everything they teach MUST be accepted by all JWs because they are coming from God’s (Jehovah’s) sole channel of communication, appointed by God Himself. But wait a minute – WHY should anyone believe that the Watchtower Society leaders ARE God’s sole channel of communication?  It’s elementary, dear Watson – they say they are, and they must be believed because they are God’s sole channel of communication. See? Oh, Okay.

It seems very strange to us that anyone would proudly claim to be an army of locusts crawling out of a smoky abyss. Not only does the Watchtower claim the terrible fifth trumpet locust army is referring to them, but they proudly claim to be the very same locust army introduced by the prophet Joel. Concerning Joel’s prophecy about a destructive locust horde, they ask:

Is this just a prophecy about “a nation” of locusts, a locust swarm, invading Judah? No, there is more to it than that. In both Joel 1:6 and Revelation 9:7, God’s people are represented by locusts. The modern-day locust army is none other than the military force of Jehovah’s anointed locusts, now joined by some 5,600,000 of Jesus’ “other sheep.” (John 10:16) Are you not glad to be part of this great throng of Jehovah’s worshipers? 2“Jehovah’s Day Is Near”; Watchtower! 5/1/1998 pp. 8-13, point 9

If they were to read down a few scant verses further in Joel chapter 2, a person might not be all that glad to be one of these locusts because the text states plainly that God Himself destroys the locusts – as should quite rightly be the fate of anything that crawls out of a smoky abyss, in our opinion. Joel 2:20 proclaims that God Himself will push His “locust army” to destruction in the desert and the sea after they have tormented His people!

Besides painting themselves as the only legitimate Christian group today, they illegitimately muscle their way into Old Testament Jewish territory as well. Charles Taze Russell founded the organization as The International Bible Students Association (IBSA) in 1872 and went on to found The Watchtower Bible and Tract Society (WTBTS) in 1881. In 1931, the then president of the WTBTS and IBSA, “Judge” Joseph Rutherford, changed the name from the Bible Students to Jehovah’s Witnesses. The new name comes from Isaiah 43, which is a passage about Who God is and about His calling and redemption of Israel. That is clear from the very first verse:

But now thus says the Lord, he who created you, O Jacob, he who formed you, O Israel: “Fear not, for I have redeemed you; I have called you by name, you are mine.” (Isaiah 43:1)

The LORD, YHWH, here calls on Israel’s surrounding pagan nations to bring forth their witnesses to prove their gods are the true gods, able to accurately predict the future before it happens. (Isaiah 43:9). Of course, it is something they simply cannot do since there is only one true God who knows the future. God then declares:

“You are my witnesses,” declares the Lord, “and my servant whom I have chosen, that you may know and believe me and understand that I am he. Before me no god was formed, nor shall there be any after me. I, I am the Lord, and besides me there is no savior. I declared and saved and proclaimed, when there was no strange god among you; and you are my witnesses,” declares the Lord, “and I am God. Also henceforth I am he; there is none who can deliver from my hand; I work, and who can turn it back?” Thus says the Lord, your Redeemer, the Holy One of Israel: “For your sake I send to Babylon and bring them all down as fugitives, even the Chaldeans, in the ships in which they rejoice. I am the Lord, your Holy One, the Creator of Israel, your King.” (Isaiah 43:10-15)

God is the central character in the entire biblical story, and all that He has done and is doing is what the entire Bible is about. What God declares WILL happen DOES HAPPEN every single time. In this case, it is the story of His calling and deliverance of Israel and their being witnesses of His miraculous work. Not the Jehovah’s Witnesses, nor the Christian church, nor anyone else replaces the nation of Israel in God’s plan. Yes, the nation of Israel was set aside for a time for rejecting their Messiah, but God will never give their place in His plan to anyone else, and the Jews will accept their Messiah in the future quite dramatically. The Jehovah’s Witnesses were not even an entity until the late 19th century, yet we are to believe that God was appointing them to be His witnesses 2700+ years ago? Yet, that is their alleged call to action – their claim to fame. If you knew how limited their god Jehovah really is – a god without omniscience – it may not be all that surprising that their god might accidentally have appointed the wrong people group a few thousand years ago. Hey, when your god is limited, stuff happens. But we digress.

In the first chapter of Acts, the Lord Jesus said to the eleven (Judas hadn’t been replaced yet):

But you will receive power when the Holy Spirit has come upon you, and you will be my witnesses in Jerusalem and in all Judea and Samaria, and to the end of the earth.” (Acts 1:8)

They were commissioned to be witnesses of Jesus.  Perhaps the clearest description was given by Peter when he met with Cornelius in Acts chapter 10:

And we are witnesses of all that he did both in the country of the Jews and in Jerusalem. They put him to death by hanging him on a tree, but God raised him on the third day and made him to appear, not to all the people but to us who had been chosen by God as witnesses, who ate and drank with him after he rose from the dead. And he commanded us to preach to the people and to testify that he is the one appointed by God to be judge of the living and the dead. To him all the prophets bear witness that everyone who believes in him receives forgiveness of sins through his name.” (Acts 10:39-43)

These apostles of Jesus were to be witnesses of the miracles Jesus performed before the Jewish nation and witnesses to the death inflicted on Him by the very nation He came to save. They were witnesses as well to His post-resurrection appearances, “not to all the people but to us who had been chosen by God as witnesses, who ate and drank with him after he rose from the dead.” They were witnesses to the truth that Jesus is the judge of the living and the dead. The apostles were witnesses that salvation and forgiveness of sins only come through believing in Jesus and through His name. In this description, Peter is pointing back to the prophets, one of whom is Isaiah, and we would suggest that Peter is connecting Isaiah 43:10 (in fact, all of Isaiah 43) to the One through whom we are saved by believing in and calling on His name. The Apostle Peter was an emphatic witness about Jesus and salvation in Acts 4:

let it be known to all of you and to all the people of Israel that by the name of Jesus Christ of Nazareth, whom you crucified, whom God raised from the dead—by him this man is standing before you well. This Jesus is the stone that was rejected by you, the builders, which has become the cornerstone. And there is salvation in no one else, for there is no other name under heaven given among men by which we must be saved.” (Acts 4:10-12)

It really comes down to a choice. We can choose to follow a group of modern-day usurpers who have appointed themselves to the role of God’s only true Witnesses, whom we all must uncritically believe and obey. Or, we can believe in and call on the Jesus being witnessed to by the people that He appointed – Who actually were there with Him and witnessed His life, miracles, crucifixion, and His resurrection.Ω