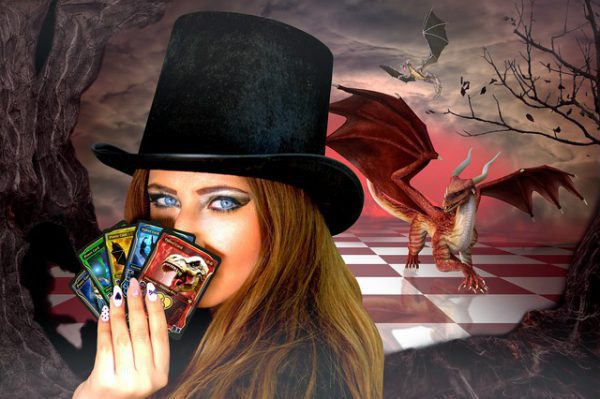 Image by Rafael Javier from Pixabay

Editor’s Note: Occult themes abound in children’s literature, on television shows, and in the movies. The entertainment industry has made a handsome profit in selling the supernatural. But as this article by Carl Teichrib demonstrates, there is a reality beyond books and TV screens – a spiritual worldview that honors creation over the Creator. Is a new Pagan age dawning? It appears so.

The conference room quickly filled. Already the first day of workshops had wrapped up, and a strange combination of giddy anticipation and serious intentionality was in the air. Greetings and hugs were shared; old friends reconnected, and newcomers were welcomed with nods and smiles. People were visibly excited, for the next hour would be the event’s official opening, a highly charged movement to set the tone for the weekend convention.

The room was devoid of chairs, and so the crowd gathered three-and-four deep along the edges, clapping and moving to the sound of inviting rhythms. The center area, however, remained free of attendees, yet it held a focal point: a draped table with seven pillar-candles, a vase, and a large bowl. When things finally settled down, it was explained that what we beheld in the middle was a well, and we were all encouraged to add water to it as we felt lead. This gathering, we were told, was a sacred grove – we were the trees, mystically connected through branches and root.

A witch stepped forward, and wand-in-hand she walked around the well, casting a magic circle.

In a hotel conference building in a Minneapolis suburb, amongst the public patrons lodging in this same establishment, a unique gathering took place from March 22-24, 2019. It was the ninth annual Paganicon, a convergence of Witches and Wiccans, Druids, Heathens, Satanists and Luciferians – an eclectic representation of the modern Pagan revival. On Friday morning, before the event began, I asked at the sign-in desk how many were expected; approximately 800 were registered.

This was not my first time at Paganicon, the regional conference for the homeland of Paganistan, the affectionate name given by local Pagans for the Twin Cities metro-region. In 2017 I attended for research purposes (see chapter 7 in my book, Game of Gods), and now, two years later, returned to keep current with what was happening in the growing Pagan community. Of special interest was the broad acceptance of Satanism.

But hold on, you might be thinking, Satanism and Paganism – isn’t this one and the same?

Yes, in that Christians recognize there is, ultimately, no Biblical difference. The ruler of this world (John 12:31), also known as the deceiver, “that serpent of old, called the Devil and Satan” (Revelation 12:9), is the one who tempted in the beginning (Genesis 3:1-5). As the father of lies (John 8:44) who transforms himself into an “angel of light” (2 Corinthians 11:14), Satan is the originator of the first deception, that the creation – Adam and Eve – can be on par with the Creator (Genesis 3:5). This ruse is expanded in the book of Romans, that when we exchange the truth of God for the lie, “we worship and serve the creature rather than the Creator” (Romans 1:25). Granting nature a status of Divinity is the heartbeat of Paganism. Indeed, if I’ve heard one thing from the Pagan community, it is this; we are a religion of nature. Such is the core of Oneness – that God, Man and Nature are essentially the same, which is the opposite of the Biblical worldview – that God is creator, and everything else the creation.

No, in that within the Pagan world there are differences in teachings, rituals, and understandings of deities and supernatural entities. For example, when comparing Gardnerian Wicca with Asatru Heathenry, one finds profound distinctions within beliefs and practices. Both are religious movements within the context of neo-Paganism, yet have teachings unique to their own paths. Likewise with Satanism.

Interestingly, the Apostle Paul inferred structures and divisions within the supernatural realm,

Powers and principalities… this thought struck me as I watched the opening ritual unfold, listening as deities and goddesses were invoked.

As a Christian researcher my primary task is to listen and observe, take notes, and consider how a particular movement is shaping and/or reflecting our times. This includes trying to understand its challenges and issues, and how it views itself in relationship to society – points of contact, and visions of tomorrow. This is what I do when attending any research function, be it an interfaith forum like the Parliament of the World’s Religions, a world government meeting, a transhumanist conference, or a culture-transforming event like Burning Man.

During my three days at Paganicon I attended twelve workshops, lectures, and group discussions. Here are some of titles and notes of interest,

Blasphemy as a Healing Tool: A Satanist from the Twin Cities opened this talk with a confession; she had no Bibles with her. As it was explained, she normally starts her presentations by tearing up a Holy Bible, standing on its shredded pages, and inviting others to come forth and do likewise. Bibles had been ordered for this workshop but they hadn’t arrived, and she wasn’t able to check into her hotel room yet, so she couldn’t take a copy from there. Her Bible destroying routine wouldn’t be happening.

Acts of blasphemy, she elaborated, are more than just a personal slap to the Christian faith; it is her service to the community. Have you been wounded by a church? Do you despise Christianity? Her answer for personal healing is expressions of apostasy and blasphemy. For example, if a formally identified Christian wanted to sever ties to a church, she would draft an official letter of apostasy on his or her behalf. Overt acts of blasphemy were encouraged in conjunction with the notice. What hit me was this: no one has a monopoly on hurting others or being hurt, Christians included – a sad reminder of humanity’s fallen nature – but in hearing her acts of blasphemy, it began to sound less purposeful, and more petulant.

Here’s a sober question. Certainly you felt uneasy about shredding Bibles, but did it bother you when I mentioned individuals leaving the Christian faith?

This workshop reinforced something I would hear more than once; that many who formerly identified as Christians now follow Pagan paths. For example, during a Saturday panel the question was raised as to which religious affiliations people held before joining the ranks of neo-Pagans: Methodists, Baptists, Lutherans, Catholics, Presbyterians, Pentecostals, Orthodox, and Missionary. Heads around the room nodded in affirmation. In fact, it was acknowledged that a relatively new movement was being born, Christo-paganism – an intentional cross-pollination of Christian teachings with Pagan practices and beliefs.

But a form of this has already been happening. Today many churches extol God’s goodness, preach a message of peace, and bend to the world in advancing deep-green causes. In the United Church of Canada hymnal, More Voices, there’s a song to the Greek Goddess of Earth, O Beautiful Gaia. In the Mennonite Central Committee’s publication, Earth Trek, there’s an appeal – bold in the original – that reads: “This week, make an offering to the Earth, in the form of a prayer or some other gift.”

Is this not paganism? It certainly fits Romans 1:25, “serving the creature rather than the Creator.” Is this not a form of blasphemy in its own rite?

Discernment for Magickal Folks: This was an intriguing presentation, wrestling with the question: how is spiritual discernment exercised?

For Christians, we turn to Deuteronomy 18 with its warning not to engage in occult practices, and we look to 1 John 4:1-6 with its testing of the spirits against the Gnostic message. Other examples include how Jesus Christ handled demonic situations, the authority of God used by the Apostles in similar settings, and the Early Church’s reliance on the power of the Holy Spirit. In other words, there is a robust Biblical framework we draw from – including the assurance that our soul is secure, that nothing can separate us from the love of God (Romans 8:31-39).

For the Pagan world, which does have spiritual manifestations – invited possessions, entity visitations, and unusual experiences – the question of discernment hangs in the air. It boils down to personal evaluation, we were told, and to aid in this process a worksheet with sample questions was handed out,

“Who am I interacting with? Specific Goddex, spirit, my own subconscious, the dead? Who did I perform magic for?… What did I feel/see… what did I want?… Where was I physically… mentally/spiritually? Where did I perform the magic, and for what reason?”

It was noted that Pagans are prone to a lack of discernment, as the quest for spiritual experiences often outweighs cautionary factors. There is an addictive quality too, it was said, with a reminder that supernatural encounters can be manipulative. We were warned that if the “inner voice changes” it may be an outside entity probing inward. Furthermore, if negative experiences are causing fear and anxiety, then participants were encouraged to seek counseling and therapy.

Hotline telephone numbers for suicide prevention and mental health were printed on our worksheets.(Part 2 next week)Ω

Carl Teichrib is a researcher, writer, and lecturer focusing on the paradigm shift sweeping the Western world, including the challenges and opportunities faced by Christians. Over the years he has attended a range of internationally significant political, religious, and social events in his quest to understand the historical and contemporary forces of transformation – including the Parliament of the Worlds Religions, Burning Man, and the United Nations Millennium Forum. Since the mid-1990s, Carl’s research has been utilized by numerous authors, media hosts and documentary producers, pastors, professors and students, and interested lay people. From 2007 until the end of 2015, he edited a monthly web-based magazine, Forcing Change, documenting and detailing the worldview revolution underway – points of pressure, forces of change.

He frequently speaks to church groups, in conference settings, and occasionally teaches a modular course on Secular/Pagan Trends at Millar College of the Bible.