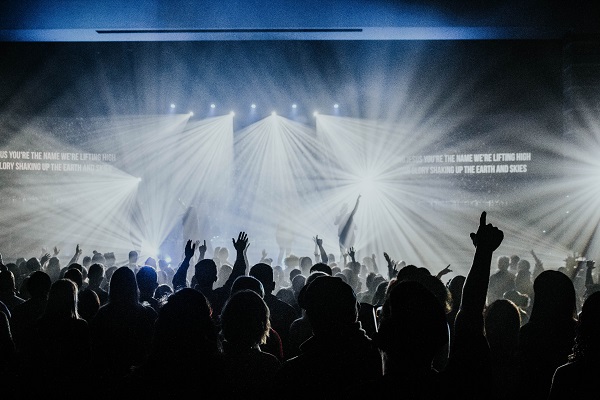 Photo by Rachel Coyne on Unsplash

When Jesus spoke with the Samaritan woman at the well (John 4:7-30), she pointed to an ongoing conflict between Samaritans and the Jews concerning the proper worship of God. The issue was location.

“Our fathers worshiped on this mountain, but you say that in Jerusalem is the place where people ought to worship.” (John 4:20)

David Stern notes that the tension between the Jews and Samaritans:

The Southern Kingdom worshipped in Jerusalem. The Northern Kingdom at Mount Gerizim. The response by Jesus is intriguing:

Jesus said to her, “Woman, believe me, the hour is coming when neither on this mountain nor in Jerusalem will you worship the Father. You worship what you do not know; we worship what we know, for salvation is from the Jews. But the hour is coming, and is now here, when the true worshipers will worship the Father in spirit and truth, for the Father is seeking such people to worship him.  God is spirit, and those who worship him must worship in spirit and truth.” (John 4:21-24)

Location, Jesus told her, is not now the most important thing, as “neither on this mountain nor in Jerusalem will you worship the Father.” Knowing Who you are worshipping and His word is most important.

The Jews at least had the correct teaching and were entrusted with safeguarding the Scriptures, but both groups were ultimately focused on themselves. They argued about the form of worship and ignored the most essential aspect of worship, their relationship with God. In the process, both groups had missed the understanding of salvation.

Spring forward about two thousand years. Early in our marriage, as we recall, there appeared to be ongoing “worship wars” in the church over music style and the proper instruments to use in worship. It should be noted that music is only one aspect of “the worship service,” but it is an important one.

For many churches, organs or pianos were thought of as the proper and more godly instruments to use in the church service, and older traditional hymns were the only genuinely godly music. In that era, guitars – and even drumsets – had begun invading church sanctuaries and causing some consternation for those of a more mature age. As Kim Jones points out in The History of Christian Music, “Pipe organs have been set aside for electric guitars and drums.” The songs’ style was different, more chorus-like, and contained less theology and doctrine than the older standard hymns. However, the new music was generally not heretical – just different. Along with guitars, drums were introduced, and accusations were made that music with a “rock beat” was pagan or even demonically inspired. We pretty much stayed out of the fray. We loved the old hymns – and still do – but we did listen to the newer music at home on something called LPs, then eight-track and cassette tapes in our car or at home. Of the more contemporary music available, we listened to the songs and artists that tended to be more theologically based and genuinely worshipful. Keith Green (Oh Lord, You’re Beautiful) was a favorite of Don’s, while Joy, though not averse to the newer worship music, tended always to prefer the old hymns. (And she still does, but that’s beside the point…) 😊

As time went on, we found ourselves attending a more contemporary church. It used contemporary music to attract the “Boomer” and later Generations. While we appreciated much of the newer music, we began buying the older hymns on a new media called CDs (compact discs) and listening to them outside of church, at home, or in the car. Over time, Christian worship music seemed to be shifting to be more or less a form of Christian entertainment, seemingly geared to induce an emotional experience for the listener. Christian concerts became common, using sound, lights, fog, and other theatrics to induce an emotional experience. Eventually, this more theatrical trend made its way into the church – and with it, a new problem. Heresies began slipping into the music unawares. It was allowed in if a song “sounded Christian” and induced a “feel-good” emotional experience. Now we know that pastors and elders were solemnly charged to be on their guard to faithfully protect their flock from heresy. (Acts 20:28-30) Yet, many questionable or downright heretical songs got past the gates. Worship music just wasn’t carefully scrutinized the way it should have been.

Other factors at work also help questionable doctrines and/or music to make their way unnoticed into our sanctuaries and quickly spread to other congregations. In the Evangelical Church, we tend to follow each other’s leads. If church “A” allows something, church “B” often assumes the teaching or music is just fine for their church. Church “C” takes its cue from Church B, and churches D, E, F, and G just naturally assume that somebody somewhere has checked out the soundness of the “new thing” and quickly becomes part of the snowball rolling down the mountain at warp speed.

Protection from false teaching encompasses more than keeping false teachers out of the pulpits. It also involves keeping false teachings, which may come into the church through other means, from sneaking in under the radar. False teaching is very deceptive and is generally delivered by sources we assume are trustworthy and therefore not looked at too closely. False teaching and heresy are being bought and paid for and brought into the churches – we like to think inadvertently – by some of the very elders, teachers, and other church leaders. They are supposed to be on guard against such incursions. This includes heretical books or courses obtained from “Christian” publishers, and/or questionable lyrics in popular “Christian” songs from unsuspected sources, or even a very harmless-seeming but wholly heretical weight loss program such as Weigh Down Workshop, led by the late Gwen Shamblin and for a time welcomed into thousands of evangelical churches, drawing away members of the flock to her own cult group. Of course, not all books, modern song lyrics, or church-sponsored programs are unhealthy for churches – but they all need to be vetted carefully by someone before allowed into churches. Too many churches and church leaders today just don’t understand the dangers to the flock that might be slipping in under the radar – or they may even lack “spiritual radar” entirely. The Evangelical churches are suffering significant losses as a result – the loss of sound doctrine and often the sound and true worship of God. It is devastating.

Over the last few years, we have engaged in discussions with those who lead worship in their churches and are using music from NAR (New Apostolic Reformation) churches. Groups like Hillsong, Jesus Culture, Elevation Worship, and others. The musicians and composers of the NAR churches are enormously talented and creative. However, the theology of the NAR and much of their music lyrics is heretical. The music from that source ranges from what might pass as solidly biblical to overtly heretical. We have raised this point during our conversations. Many music leaders know and avoid the NAR songs with lyrics they deem as heretical, but they may continue to use and promote popular NAR music that they view as biblically sound. Unfortunately, that response misses the point. We sometimes ask if they would invite Bill Johnson from Bethel Redding or Che Ahn to speak in their church pulpit, and the doctrinally sound music leader will invariably say, “No, not a chance!” When we ask why they, of course, answer that he is a false teacher.

Trying to weed out the more heretical teachings of a false teacher while giving them a selective pass into our church is dangerous. False teachers who invade or rise up within the church usually support some actual teachings. (Even the JW at your door is right about some issues) However, once embraced and brought into the fellowship, they will be able to introduce destructive heresies to people who do not know any different.

Just as we said, one church often follows another regarding new books, teachings, ideas, etc., assuming that someone somewhere has checked them out and given the stamp of Christian approval. So if one church is careful only to play cherry-picked “OK” songs from the dubious source, the “church down the road” may assume that since your church accepts the source as perfectly legit, their church can safely follow suit. And so the snowball starts rolling… We do not under any circumstances want to give a false teacher any opening. If you found one of the many books published by the Watchtower Society to be OK, would you use that book in your church? No, you would not.

Meanwhile, the folks in your pews will likely assume that their church would not play any music from heretical sources, and their guard will be down regarding that source. The songs, though “vetted” – with only orthodox songs used – will, of course, be displayed on the screen with the lyrics, the title, the name of the song’s owner/publisher, lyricist(s), composer(s), and licensing number. That is free advertisement and defacto endorsement given by the church using the music. The person sitting in the pew likes the song, sees the “recommendation,” and perhaps goes looking for more of the music by the individual or group.

If a worship leader insists that they are not responsible for what the person in the pew may think or do, we helpfully suggest they post skull and crossbones next to the song’s information. Those attending can then be alerted that the church is using material by false teachers and react accordingly. The suggestion is rarely accepted – in fact, not ever.

In addition to giving tacit approval to false teachers, the churches using these songs pay a royalty to use them in their services. Therefore, they are assisting in supporting and financing the propagation of these heresies throughout the body of Christ. We have looked in vain to discover an exception clause in Paul’s charge to the Ephesian elders or in his pastoral letters to Timothy and Titus, to the effect that churches can use “good stuff” by false teachers. Instead, we repeatedly find God’s unqualified instruction to boot them out bag and baggage. The role and responsibility of leadership in the body of Christ are too rarely exercised.

Simply put, leaders are to guard the flock against false teachers and teachings and perhaps instruct the flock concerning how that can be done. Let’s not deviate from worship’s true meaning. The worship service is about worshipping the LORD in spirit and truth.Ω