Many Paths to God? 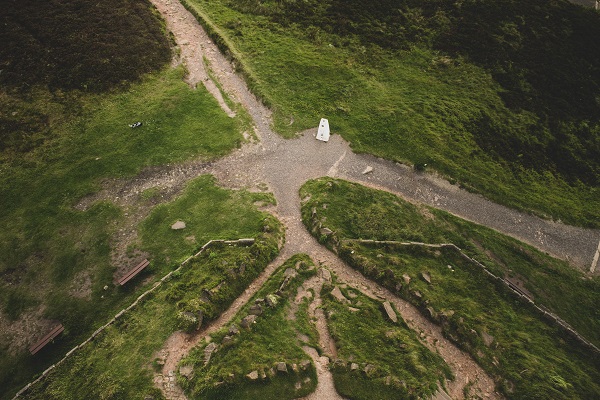 Photo by Tara Scahill on Unsplash

All roads that lead to God are good.
What matters it, your faith, or mine?
Both centre at the goal divine
Of love’s eternal Brotherhood.

The kindly life in house or street –
The life of prayer and mystic rite –
The student’s search for truth and light –
These paths at one great Junction meet.

The first two stanzas of Ella Wheeler Wilcox’s (1850-1919) poem, “All Roads That Lead To God Are Good,” paint a romantic picture that reflects a very popular theme, even today. Does it really matter which path one takes to God? All paths will get you there, as the saying goes. Wilcox was a popular New Ager before New Age was in vogue.11850-1919, From Ella Wheeler Wilcox bio on Theosophy Wiki; “Ella Wheeler Wilcox (November 5, 1850 – October 30, 1919) was an American poet and journalist who was keenly interested in Theosophy, New Thought, Rosicrucianism, and Spiritualism. An enormously popular writer whose verses were criticized by the academic world, her most famous lines are still quoted from her poem ‘Solitude’”

America’s leading cultural theologian and high priestess, Oprah Winfrey, echoes these sentiments in her interview with New Age author of Return to Love, Marianne Williamson. In a lively exchange with evangelicals in the audience on this video clip, Oprah confidently asserts, “there are many paths to what you call God.” She bolsters her position by stating unequivocally, “there cannot possibly be just one way.” Oprah has spoken – no other opinion need apply!

We feel the need to question whether or not Jesus knew that. After all, it is He who said,

I am the way, and the truth, and the life. No one comes to the Father except through me. (John 14:6)

When Oprah filmed her interview with Marianne Williamson some years ago, I doubt that very many within the evangelical church would have affirmed that “all paths lead to God.” But things are changing rapidly in our world, as well as in the church. Since this interview was aired, there has been a veritable avalanche of change in evangelical thinking. Sometime around the turn of the 21st century, a small band of evangelical pastors began to “emerge” from evangelical churches, taking a relatively large segment of evangelical followers along with them. Brian McLaren, Rob Bell, and others started the aptly named “Emergent movement” due to their reading and eventually meeting a relatively unknown Franciscan Friar by the name of Richard Rohr. Rohr’s impact was absolutely transformative. Aaron Niequist, worship leader at Rob Bell’s Mars Hill Church prior to moving to Willow Creek Community Church, claimed Richard Rohr had revolutionized his understanding of the Christian faith. Embracing Richard Rohr’s ideas would do that to a person. Many former evangelicals have had their understanding of the faith “revolutionized” in the past few decades, and not in a good way, from the standpoint of biblical Christian truth that the Apostle Jude referred to as “the faith once for all delivered to the saints.” (Jude 3)

In 2006, Rohr’s influence on Brian McLaren is seen in his article, “A Reading of John 14:6.”2Our friend, Dr. Thomas Howe did a three-part series on this entitled, “Brian McLaren, “Is Jesus the Only Way to What?,” Part 1,” Part 2 and Part 3 McLaren proposes that Jesus is one among many paths, depending on where you want to go. In a June 19, 2010 post-McLaren responded to a fan’s gratitude for his “A Reading of John 14:6,” wherein McLaren had given him a new understanding of his friends in other faiths and their position before God. McLaren notes that he had expanded on this article and included it in chapter nineteen of A New Kind of Christianity.

McClaren’s view isn’t really new, and it isn’t really Christian, and it is truly just the old kind of liberalism with the “all paths get you to God” ideas. McLaren writes:

I don’t believe making disciples must equal making adherents to the Christian religion. It may be advisable in many (not all!) circumstances to help people become followers of Jesus and remain within their Buddhist, Hindu or Jewish contexts … rather than resolving the paradox via pronouncements on the eternal destiny of people more convinced by or loyal to other religions than ours, we simply move on … To help Buddhists, Muslims, Christians, and everyone else experience life to the full in the way of Jesus (while learning it better myself), I would gladly become one of them (whoever they are), to whatever degree I can, to embrace them, to join them, to enter into their world without judgment but with saving love as mine has been entered by the Lord3Brian McLaren,  A Generous Orthodoxy: Why I Am a Missional, Evangelical, Post/Protestant, Liberal/Conservative, Mystical/Poetic, Biblical, Charismatic/Contemplative, Fundamentalist/Calvinist, Anabaptist/Anglican, Methodist, Catholic, Green, Incarnational, Depressed-yet-Hopeful, Emergent, Unfinished CHRISTIAN, Zondervan; 2004;  260, 262, 264

This dovetails quite nicely with Richard Rohr’s teaching found in the short video, “Richard Rohr – Why Do We Misunderstand John 14:6?” In a little over a minute, Rohr expounds on his theology that the Cosmos is the first incarnation of the Christ. All of us, being part of the creation, are already in Christ regardless of what you may believe or which path you are on. If that is true, there is no need to proclaim the gospel; we can just help them be the best Buddhist, Hindu, JW, etc., they can be.

It is a tragedy that more and more evangelicals are embracing Rohr’s heretical teachings and are engaged in the process of deconstructing the Christian faith. They like Jesus but have become convinced that “the only way” claim of Jesus is a very narrow idea that must be repudiated. Rohr suggests the historic Christian faith has a very small god in their belief system, while he and his merry band of followers have a bigger God than the entire universe! What a very tolerant attitude – except for his intolerance of biblical Christianity, as outlined above. But that is to be expected. After all, Jesus said his followers would not necessarily be popular in the wider culture.

Rohr’s disciples – Suzanne Stabile, Ian Cron, Christopher Heuertz, and others – have been invited right into the churches to facilitate his transformation of the evangelical faith. Other venues supposed to be evangelical have hopped right on the bandwagon. Intervarsity Press, Zondervan, Thomas Nelson, and others have been busily marketing Rohr’s baby, the Enneagram, to evangelicals everywhere. A core teaching of the Enneagram is that all persons, regardless of faith path or no faith at all, are already with God and have never been separated from God. The Enneagram offers nine paths to reach just this realization. There are currently over forty pro-Enneagram books sold by evangelical publishers, promoted by Christian media, and selling like hotcakes! The first three, The Road Back to You (Stabile and Cron; 2016, IVP); The Sacred Enneagram (Christopher Heuertz; 2017, Zondervan); The Path Between Us, (Stabile; 2018, IVP) have a combined sales of nearly a million copies so far. We would estimate that over two million evangelicals have embraced the Enneagram to some degree.

Ella Wheeler Wilcox actually was right when she claimed, “These paths at one great Junction meet.” In truth, all paths do lead to God. The Bible tells us that everyone from all spiritual paths will stand before God, but getting to God is not the most vital issue. Instead, it is what happens to people after that meeting that is all-important for our eternal welfare. In Romans 14:11, the Apostle Paul quotes Isaiah 45:23:

for it is written, “As I live, says the Lord, every knee shall bow to me, and every tongue shall confess to God.”

Every person will follow whatever path they choose to take and will come face to face with God. At that meeting, one of two things will happen. Those who have believed in God and confessed in this life that Jesus is the way, the truth, and the life, will be welcomed to dwell with God eternally. Those who waited to believe until that fateful meeting will also confess Jesus as Lord – realizing far too late that they have been on the wrong path all along. God will send these from his presence eternally.

This fact saddens our hearts greatly. Christian publishers, journalists, pastors, elders, and those in the pews should know the faith “once delivered” like the back of their hand and be able to lovingly point the way to people on alternate paths. Ella Wheeler Wilcox, Oprah Winfrey, Brian McLaren, Richard Rohr, Suzanne Stabile, Ian Cron, Christopher Heuertz, and others offer a cheap trip down the well-worn path that leads to destruction. (Matthew 7:13-14) Jesus offers a very costly path, and He paid the entire expense with His own blood. He offers everyone the only path which leads to blessed eternity with God. The Apostle Paul explains how one gains life eternal:

because, if you confess with your mouth that Jesus is Lord and believe in your heart that God raised him from the dead, you will be saved. For with the heart one believes and is justified, and with the mouth one confesses and is saved. For the Scripture says, “Everyone who believes in him will not be put to shame.” For there is no distinction between Jew and Greek; for the same Lord is Lord of all, bestowing his riches on all who call on him. For “everyone who calls on the name of the Lord will be saved.” (Romans 10:9-13)Ω