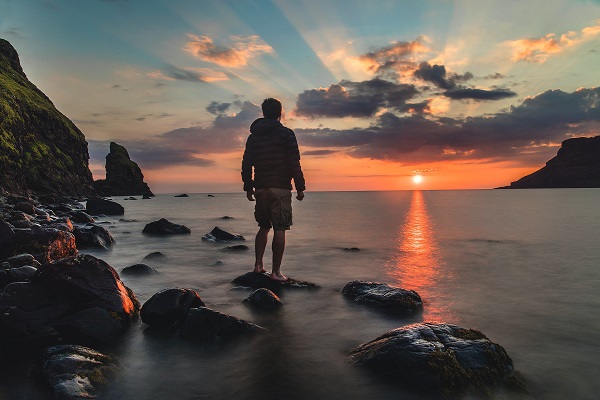 Photo by Joshua Earle on Unsplash

In Judges, Gideon asks God how to choose his men for battle. The Lord told Gideon to take his men down to the river and drink. The men who flopped down on their bellies and drank like dogs were no good to him. Gideon watched as some of his men knelt down and drank with their heads, watching the horizon. Spears in hand. Though they were few, they were the men he needed. You’ve always been one of the few James. Keep watching the horizon.1Jack Karr, The Terminal List; Atria/Emily Bestler Books; March 6, 2018, Chapter 41 Audible version

This homey rendition of Judges 7 from Jack Karr’s, The Terminal List had a deeply emotional impact as we listened to the book on Audible. Looking at the scripture, in Gideon’s day, the Midianites and the Amalekites had been assaulting the nation of Israel, wearing them down, depleting their produce, livestock, even their tents. The first verse of Judges chapter 6 explains why God was allowing Israel to be assaulted,

The people of Israel did what was evil in the sight of the Lord, and the Lord gave them into the hand of Midian seven years (Judges 6:1)

God called Gideon to battle against the Midianites and the Amalekites, and interestingly, he was quite fearful of his given mission. He did not enjoy the idea of standing against the idolatry that the people had mixed with true worship and adopted as their own. In the end, though, Gideon trusted the Lord. Gideon’s father had compromised his faith and built an altar of Baal and an Asherah next to it. God’s first instruction to Gideon was to take two of his father’s bulls, tear down both idols, build an altar and sacrifice the younger bull as a burnt offering to the LORD. Gideon did as the LORD commanded, but he was so fearful of his own family and the townspeople that he did this at night. Let’s just say folks ’round about were not happy about what Gideon did. Even though they had called on the LORD for deliverance from the enemies who were assailing them, they certainly did not want to give up their idol worship. (Judges 6) But God does not tolerate mixing the true worship of Him with heathen worship.

Once false worship had been addressed inside the community of God’s people, the preparation for Gideon to take on the enemies outside the community of God’s people began. At the Lord’s direction, Gideon had been in the process of whittling an army of 32,000 down to a mere 300 men! Those would be the ones the LORD would use to go against the Midianites and the Amalekites. These 300, though few in number, had a particular characteristic the others did not have – they were always on the alert. Against all human odds, Gideon and the 300, armed with, of all things, trumpets and empty jars with torches inside the jars. Oh, and of course, God!

With these “weapons” in hand and trust in the God who had called them, they routed the entire army of Midianites and the Amalekites. If you haven’t read the story, it is worth your time. Our thoughts were drawn to Acts 20:28-31:

Pay careful attention to yourselves and to all the flock, in which the Holy Spirit has made you overseers, to care for the church of God, which he obtained with his own blood. I know that after my departure, fierce wolves will come in among you, not sparing the flock, and from among your own selves will arise men speaking twisted things, to draw away the disciples after them. Therefore be alert, remembering that for three years, I did not cease night or day to admonish everyone with tears.

The charge to pastors and elders in the church is not unlike the description of Gideon’s 300. “Pay careful attention.” They are to be vigilantly on the alert. What were they to be vigilant about? They were to remember that they themselves, and the people in their charge, were purchased at an extremely high cost, “his own blood.” They were to be watching the horizon as predators would attempt to creep into the congregation and to watch for those who were somehow already on the inside. The last line of Paul’s charge is, “Therefore, be alert.” The predators they were to be constantly aware of were false teachers and deceivers, who would corrupt the congregation and turn them away from God. Down through all the church ages, false teachers have been ever attempting to make their way past the guards (elders) and into the church. Sadly, many of these corrupters have gotten in and are busily diverting believers from the true faith to false belief and worship. Sometimes they succeed, not usually by a direct assault on the truth, at least at first, but by subtly mixing truth and falsehood and getting people to accept a sort of amalgamation of Christianity and pagan thought. This process continues to corrupt the faith until there is not much recognizable “Christianity” left in the mix.

We at MCOI and Marcia Montenegro at CANA (Christian Answers for the New Age) receive emails, Facebook messages, and phone calls every week from believers distressed by significant changes they see happening in the churches they have been a part of for many years and which once faithfully taught the truth. Someone made this comment to Marcia:

I’ve seen firsthand what is happening to the congregation my husband and I had attended for 16+ years. A so-called “spiritual director” comes to give “soul care” to the ministers, staff, and any elder who will make an appointment. Her “ministry” is called Eleven:28 and is designed to provide soul care to church leaders. On their website, they offer e-courses, one of which is called The Wisdom of the Enneagram. She has introduced the Enneagram and subscribes to other false teachings. At least 2 of the ministers and one of the spouses have obtained certification as spiritual directors and have influenced multiple members. They are enamored with the Enneagram. Much prayer is needed.

Marcia notes that she looked up Eleven:28 and reviewed their site. She suggests many Enneagram teachings are hidden in the Contemplative/Spiritual Formation ministries. Marcia has written posts on these New Age Practices and notes that these non-Christian ministries are greatly multiplying! One course Eleven:28 offers is called “Enneagram Wisdom for Our Changing Faith.” This begs the question: just why should our faith be changing, and what is our faith changing to? Christians are not to be a party to changing the faith once delivered to the church. Rather than changing the faith, we are to jealously guard it against all deviation. God indeed intended the truth the church was taught in the first century to stay true throughout the generations! Recall the words of Jude 3&4:

Beloved, although I was very eager to write to you about our common salvation, I found it necessary to write appealing to you to contend for the faith once delivered to the saints. For certain people have crept in unnoticed who long ago were designated for this condemnation, ungodly people, who pervert the grace of God into sensuality and deny our only Master and Lord, Jesus Christ.

Large swaths of “Christianity” in our day are being corrupted to Eastern mysticism using the newest pagan idol, the Enneagram. God rejects the amalgamation of true faith with idol worship today, just as He did in Gideon’s day. It also is a reminder of a question posed by Jesus:

One of the comments to our webcast, “A Day of Infamy: Richard Rohr and Penal Substitution” with Pastor Gino Geraci, is also heartbreaking:

Having just returned to the church after leaving 20 years ago, I was shocked to see so much influence from Eastern philosophies and practices.  I found that many of these new and twisted definitions of Christianity blended well with varying degrees of the New Age and even Progressive Christianity – contemplative prayer, the Enneagram, yoga, an emphasis on morality, and an inner, divine identity.  I gravitated towards New Thought and New Age when I left the church.  When I returned to the church, I had no idea just how much church culture shifted…of course, I would later find out that the church culture that I grew up in 20 years prior was what is known now as the New Apostolic Reformation, so I suppose the church was already shifting when I left.  I went from one experiential deception to another and another and another until Jesus led me out of it.  Unfortunately, it seems that countless Christians are greatly deceived…even very well-meaning, devout, extremely biblically literate people argue in favor of the Enneagram and contemplative prayer.  In particular, I just don’t understand how folks would be okay with using the Enneagram or even mentioning it in sermons for an entire congregation to pick up on and be influenced by if one truly knew the entire history of the origins of the Enneagram and Richard Rohr.

Sadly, the answer is this; too few Christians, even pastors, and elders are “on the alert” for false teachers and teachings. They have stopped watching the horizon for spiritual dangers to the flock. Indeed, many are actually providing a comfortable home for the newest idol, which promises “spiritual enlightenment” – The Sacred Enneagram.

Some claim the Enneagram is a revolutionary tool and completely changes the focus of the faith. They change the problem. It is no longer a sin problem but a false identity problem. The wonderful new “spiritual tool” promises that one of its numbered paths is your personal path to the realization that your “True Self,” your “true” identity, has never been separated from God. Don’t hurry past this statement because it IS WHAT THEY TEACH, and it is a complete denial of the gospel and indeed eliminates the need for the gospel. If you have never been separated from God, you surely do not need salvation or a savior. If there is no need for salvation or a savior there is no need for the penal substitution (Christ’s sacrifice). The Enneagram Wisdom truly is turning the faith of many believers and so many churches upside down, and people are happily exchanging their identity in Christ for an empty promise. It is a huge spiritual battle in our day.

There are pastors and elders who thankfully are engaged, but what is needed are many more elders and believers who are watching the horizon and are equipped with the right tools to defend the faith:

For though we walk in the flesh, we are not waging war according to the flesh. For the weapons of our warfare are not of the flesh but have divine power to destroy strongholds. We destroy arguments and every lofty opinion raised against the knowledge of God, and take every thought captive to obey Christ, (2 Corinthians 10:3-5)