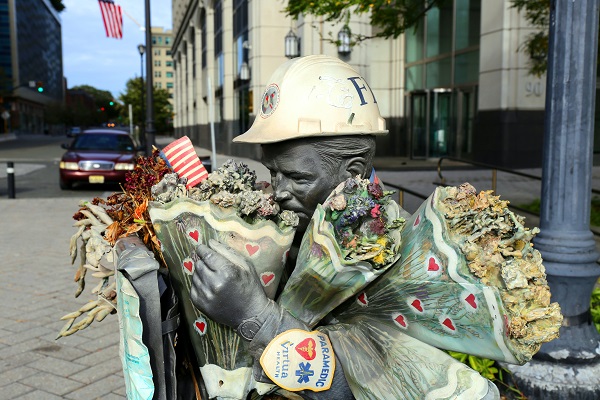 Photo by tommao wang on Unsplash

Then Joshua called the twelve men from the people of Israel, whom he had appointed, a man from each tribe. And Joshua said to them, “Pass on before the ark of the Lord your God into the midst of the Jordan, and take up each of you a stone upon his shoulder, according to the number of the tribes of the people of Israel,  that this may be a sign among you. When your children ask in time to come, ‘What do those stones mean to you?’ then you shall tell them that the waters of the Jordan were cut off before the ark of the covenant of the Lord. When it passed over the Jordan, the waters of the Jordan were cut off. So these stones shall be to the people of Israel a memorial forever.” (Joshua 4:4-7, ESV)

Events are memorialized in a variety of ways and for differing reasons. There is one common theme – Remember. Some memorials are physical structures that commemorate good things. Joshua was instructed in Joshua chapter four to have a man from each of the twelve tribes of Israel carry a stone to the middle of the Jordan after God caused the waters to “stand in one heap.”(Joshua 3:13) The stones were deposited there as a reminder to those who witnessed the event, their children, and children’s children of the amazing miracle God had wrought on that day. Others, like The Holocaust History Museum, Yad Vashem, are reminders of an unspeakable evil perpetrated on human beings – in hope that such evil will not be replicated ever again in the future.

Some events are memorialized with a special day, such as marriages and birthdays. Joy and I will celebrate our fifty-first anniversary in a few days. We have been blessed in many ways over the years and like many, have experienced hardships and challenges together. Other anniversary memorials may be a combination of tragedy and triumph. This Saturday is just such a memorial. Twenty years ago on this date, our nation was attacked by a group of terrorists trained in Afghanistan. Many of us will have stark memories of that dark day’s events, while younger people without the direct memory of the day might wonder what all the hubbub is about. Like the descendants from Joshua’s generation, we will need to explain why this memorial is important. This is an account of the event on September 11, 2001, as  described by an eyewitness, first responder, NYFD Captain, Jay Jonas on the tenth anniversary:

Capt. Jonas was on the 27th floor of the North Tower when the South Tower collapsed.

“There was another captain on the 27th floor, and I said [to him]: ‘You check the south windows. I’ll check the north windows,’ because I thought a piece of our building had just collapsed. And he just looked at me and said, ‘The South Tower collapsed.’ The firefighters under my command didn’t hear the conversation, and I just looked at them and said: ‘It’s time for us to get out of here.’ “

The captain and his men started to make their way down the staircase. Minutes before the tower came down, they came across a woman named Josephine Harris. She said she needed help.

“She was crying,” he says. “My guys stopped and one of my firefighters turned around and said, ‘Hey Cap, what do you want to do with her?’ And every fiber in my being was screaming at me to get out of this building. Every second we waste was one second closer to us not getting out of the building. But that’s not what firemen do. We were there to save peoples’ lives. That’s the whole purpose for us climbing those stairs was to save someone.”

Jonas and his men started carrying Harris down the stairs. They reached the fourth-floor landing when the building started to collapse.

“The floor started to move,” he says. “Since the collapse started 1,300 feet away, the sound was off in the distance. And it got louder as it got closer. And you could hear the floors hitting the other floors, and it created tremendous vibrations in the stairway. You could also hear the sound of twisting steel all around you.”

“We were coughing and gagging and trying to get debris out of our mouths and our noses, and I thought, ‘I wonder who else is still alive?’ ” And I gave out a roll call, and all of my people were accounted for,” he says. “So our initial thought was, OK, ‘We’re alive. Let’s dust ourselves off and continue down the stairway.’ “

The stairway was gone. Jonas, Harris, and the other firefighters waited for several hours when they saw a sliver of sunshine hitting them. He could see a pencil-width beam of sunlight.

Jonas and his men finally found a way to inch their way out of the rubble pile. Once he saw the devastation, he says he didn’t know how he was able to survive.

“You want to be happy, but you can’t,” he says. “It was hard to feel any sense of joy or accomplishment — looking out and knowing how much pain and grief was going to be going on over there. … [While I was being treated] I talked to a guy who was one of my contemporaries and he said, ‘I heard your radio transmissions. Congratulations. That was unbelievable. That was one of the most dramatic things I ever heard. … By the way, did you see Engine 4 today?’ And I thought to myself, ‘Gee, what an odd question.’ And I said, ‘Honestly, no, I didn’t see Engine 4 today.’ And he said, ‘Oh. My son was working in Engine 4 today.’ And that hit me like a ton of bricks — that this is going to be monumental, the amount of grief and suffering within the fire department.'”1“Jay Jonas: ‘You Want To Be Happy, But You Can’t’”, excerpted from “NYC Firefighters Share Memories From Ground Zero”

In the midst of tragedy, we have many other touching rescue stories from survivors, in some cases resulting in lifetime friendships. You can find many of these beautiful stories aired on the History Channel this Friday and Saturday.

Another memorial, which we take part in this weekend, is both a reminder and a celebration. As a church, we will remember an unspeakably tragic event – which resulted in an astounding gift to us we do not deserve – peace with God. We will celebrate the crucifixion, burial, and resurrection of our Lord and Savior, Jesus Christ. Where firefighters and other first responders were heroically willing to lay down their lives to save the temporal lives of innocents in the twin towers, our Lord sacrificed His life to provide eternal redemption for all, who need only call on His Name for salvation. Not only did He willingly sacrifice His life but raised His body from the dead to defeat death itself. He truly turned a terrible tragedy into a celebration. As a result, we can rejoice in the great gift He provided for us – eternal peace and blessing with God. That truly is something glorious to remember.Ω