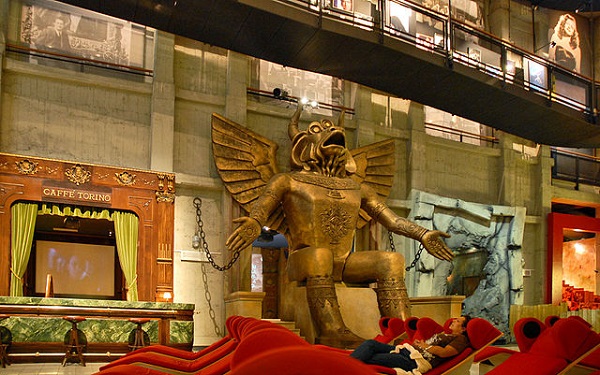 This file is licensed under the Creative Commons Attribution 2.0 Generic license

Down through history the people of God have gone astray, not generally by directly repudiating God – at least at first – but by adding false gods, and pagan ideas and practices into the mix of their beliefs. Ahaz was the King of Judah c. 735–720 B.C. He acknowledged God and yet he “was the first king to indulge in the worship of Moloch.”1“Ancient Jewish History: The Cult of Moloch,” Jewish Virtual Library: A Project of AICE In 2 Chronicles 28:23, he justified his idolatry for what he imagined were practical reasons:

For he sacrificed to the gods of Damascus that had defeated him and said, “Because the gods of the kings of Syria helped them, I will sacrifice to them that they may help me.”

Sure, the LORD had been clear in forbidding occult and pagan practices, but Ahaz reasoned that perhaps the origins were not really important as long as Ahaz didn’t overtly deny God – and if he believed the appropriation would benefit him. The last part of the passage reveals the consequences of this justification:

But they were the ruin of him and of all Israel.

One of the main themes of the Reformation was Sola Scriptura, i.e., Scripture alone is sufficient for faith and practice. The Westminster Confession of Faith (1647), chapter one section VI defines it this way:

The whole counsel of God concerning all things necessary for His own glory, man’s salvation, faith, and life, is either expressly set down in Scripture, or by good and necessary consequence may be deduced from Scripture: unto which nothing at any time is to be added, whether by new revelations of the Spirit, or traditions of men.

This would mean the Bible is the final authority about human nature, human feelings, insights of oneself, sin, the way to God and final self-knowledge and understanding. There are many things to which the Scriptures do not directly speak, such as genetics, higher math, electricity, or nuclear fission, for just a few notable examples. But Scripture may speak to morality and behavior in their use. In other words, there are many areas of knowledge where we may find truth, but to qualify as something of value, it must be true. It also cannot conflict with God’s revelation in Scripture.

For example, in Deuteronomy 13, God laid out a situation where “a prophet or dreamer of dreams” might make a prophecy which comes to pass, yet he cannot be accepted as a true prophet because said prophet leads the people to false gods. We do not find the passage teaching that since there was truth in the words of the prophet and “all truth is God’s truth,” the people were free to focus on whatever truth was in the message and appropriate it, ignoring any pagan influence. No, the passage says something completely different. They were to focus, not on whatever truth he may have imparted, but on his connection to false gods, and were to execute him. What we find in Scripture is a prohibition from going to false and occult sources in search of answers. Some of what those sources say may indeed be true, but God’s focus was entirely on the pagan nature of the source.

A recent point/counterpoint discussion “Should Christians embrace the Enneagram?” was hosted by Justin Brierley on Premier Christian. The guests with opposing views were Todd Wilson,2From “About Todd Wilson,” Dr. Todd Wilson is an author, speaker, theologian, and the Co-Founder of the Center for Pastor Theologians. He is a graduate of Wheaton College and completed his PhD in New Testament Studies at Cambridge University. He is the author or editor of over a dozen books related to Christian ministry, theology, and biblical studies. Todd has over 15 years of pastoral ministry and currently serves as the President of the Center for Pastor Theologians. author of The Enneagram Goes to Church and Marcia Montenegro, co-author of Richard Rohr and the Enneagram Secret.3Marcia is a former New Ager and professional astrologer. After coming to the faith, she Marcia attended Southern Evangelical Seminary, Charlotte, NC., where she received her  master’s degree in Religion. She serves as a missionary with Fellowship International Mission (FIM), Allentown, PA Both guests were polite, and it turned out to be a mild-mannered disagreement, though the two could not have been more divided on the issue of the Enneagram.

Todd is very well educated (graduate of Wheaton College, PhD from Cambridge University) and is Co-Founder and President of the Center for Pastor Theologians. Even so, has he unwittingly followed the path of Ahaz? Has he enthusiastically embraced something from occult/pagan sources because he believes it helps him and others to understand human nature, human feelings, insights of oneself, the true nature of sin, new ways to God and final self-understanding? It appears he has. Are the Scriptures and the Holy Spirit’s leading insufficient to that task?

The host, Justin Brierley, and Todd Wilson stated the Enneagram is a “personality typing system,” and portrayed it as a tool for assessing an individual’s personality. From minute 13:12 to 17:35, Marcia pointed out that the official position from the originators of the Enneagram – New Agers and Occultists – of the Enneagram types were clear that the purpose of the Enneagram is not to ascertain your personality type. Marcia contradicted their mis definition by pointing out that the Enneagram’s true teaching is that You are not a type – rather you have a type, and that type gets in the way of who you really are. Once a person discovers his or her “type,” they will have found the path to take to get back to one’s unsinful “True self,” which Enneagram masters say has never been separated from God. Russ Hudson, New Ager, and co-founder of the Enneagram Institute is attributed as saying:

Type isn’t a ‘type’ of person, but a path to God4Jonathan Merritt. “What is the ‘Enneagram,’ and why are Christians suddenly so enamored by it …,” Religious News Service (September 5, 2017); https://religionnews.com/2017/09/05/what-is-the-enneagram-and-why-are-christians-suddenly-so-enamored-by-it/

The purpose of the Enneagram is not self-improvement, which would be our ego’s goal. Rather, it is the transformation of consciousness so that we can realize our essence, our True Self5“The Enneagram (Part 1),” Monday, May 26, 2014, Richard Rohr’s Daily Meditation; (Copy on file.); https://myemail.constantcontact.com/Richard-Rohr-s-Meditation–The-Purpose-of-the-Enneagram.html?soid=1103098668616&aid=r3z0f6qxjmc

Your “True Self,” your “essence” is and had always been with God. We have all supposedly created a false self which believes false things about ourselves. The Enneagram gets you on your own personal path away from those false beliefs to your true unsinful self.

In just four minutes, Marcia pointed out the Enneagram derives from the occult, and is not based on any credible psychological theory. It did not come from studies, research, psychological organizations, and it has no credibility whatsoever “in the world of psychology.”  When asked if she thought it is pseudo-scientific, she responded that she thinks it is “pseudo-scientific with occult overtones.” She then went on to compare the Enneagram with the occult practice of astrology and explained that the people who enthusiastically say the Enneagram “works for them” are comparable to the far larger numbers of deceived people who for generations have believed that astrology works and is beneficial to them and noted that the two systems are embraced by people for the exact same reasons which she outlines.

When Todd could not defeat Marcia’s arguments about the occultic nature and origins of the Enneagram, he attempted to portray her as an anti-science extremist who probably also rejected scientific evolution. In addition, he also painted her as a rather unenlightened Christian who probably finds fault with the practice of Yoga. Finally, however, Todd Wilson admitted that Marcia knows the origins and grasps the information and research about the Enneagram far better than he does – and is perfectly happy to grant that all of the points she made are true. He then claimed he has no stake in “where the Enneagram came from.” The fact that the Enneagram has occult pagan origins does not dampen its appeal for him.

“I don’t think that undermines it as a tool that can be used by Christians as long as it is Christianly utilized and appropriated.”

He goes on to state that he rejects genetic fallacy he claimed Marcia had committed. He explained a genetic fallacy is a way of saying that “where a thing comes from dictates what it is.”

We question Todd’s suggestion that one can “Christianly utilize” pagan practices, wondering if it may be time soon to “Christianly utilize” the Ouija board, which also purports to offer answers to the wisdom-seeking individual. But we digress. Marcia correctly pointed out that she didn’t use a genetic fallacy because a genetic fallacy only applies if you are basing your argument just on the facts of the origins of something. In response to his implied suggestion of an anti-science bias, Marcia correctly pointed out that the Enneagram is not in any way backed by science, correctly stating the Enneagram has not been validated scientifically or psychologically, as well as its being in direct conflict with biblical teaching concerning looking for truth in false prophets and their occultic teachings.

Even putting aside its occult origins, and its egregious false teachings concerning the “True Self” and all the rest, the Enneagram is a complete and utter fraud. It cannot help anyone and is definitely not a path to God.

Todd Wilson explained that he believes Christians can embrace and “transpose” New Age, Eastern mysticism (Yoga) and occultism (Enneagram) into a Christian context. He presented this as being:

“what mature, responsible Christian living in our world is really all about. It’s about a hermeneutic that can appropriate things that have non-Christian origins in a Christianly responsible way.”

Sorry I can’t help myself, but here’s my final summary of the debate:

Marcia: “The Enneagram is invalid both scientifically and theologically and here are 50,000 logical, historical, and biblical reasons why.”

King Ahaz appropriated the gods of Damascus because they “helped” the kings of Syria. It was the “ruin of him and of all Israel.” As Pastor Todd Wilson and other pastors and celebrity leaders inappropriately appropriate and transpose the practices of occultism like the Enneagram to “fit into” Christian faith and practice, it is terribly sad to wonder how many of them and their congregations may end up in ruins?Ω