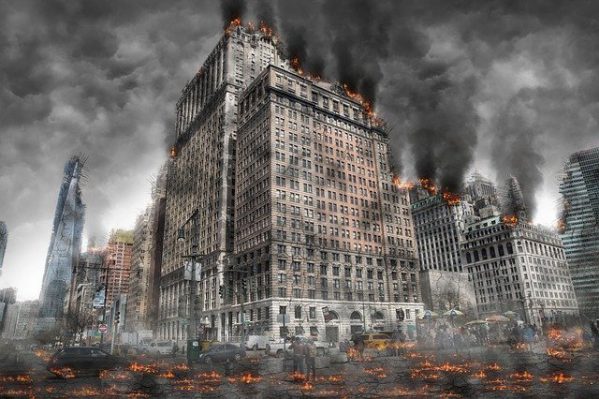 Image by Pete Linforth from Pixabay

At the dawn of human history, before the formation of tribes and nations, a calamity with unimaginable scope and reach rocked creation. For those personally involved, nothing would be the same – their previous reality was ripped away, relationships were ruptured, every aspect of their lives indelibly shattered. Nothing worse could have happened.

For the multitudes following in their footsteps, having never tasted what life was like before the catastrophe, an agonizing yearning would be felt; a haunting desire to recapture that which was lost. From generation to generation, a soul-level ache to rebuild would be evident. But even in this longing something was amiss.

Yes, the aspiration to recover was there, but the only way to seemingly achieve this lofty goal was to somehow take hold of the conditions that had triggered the disaster. It would be a return to the scene-of-the-crime, figuratively speaking. What was not metaphorical was the unstoppable urge to repeat the offense, and to do so continuously until, in some way or fashion – by hook or by crook – the prize would be seized. Ironically, to supposedly nullify the effects of this greatest tragedy would require not only continuing in the transgression, but in perfecting it.

And so from the distant past until today, collective humanity declares: Eden will be recreated in our own image, and we prove ourselves to be as God by forcing Heaven-on-Earth. The deceptive promise of Genesis 3 – to be as God, to know good and evil, and to live forever – was the prelude to the greatest catastrophe in human history.

Then Eve took the bite, and all creation felt the shockwaves of decay.1Romans 8: 20-21

We daily participate in this catastrophe. It plays out in our sinful nature: in the lusts of our flesh, and the consequences of our fallen state of affairs. But it’s this constant desire to achieve the pre-condition promises that add an extra layer of hubris; we will be as gods, aspiring to this heady position through ritual and philosophy, or through our collective endeavor as United Humanity.

Such is the underlying philosophy of Freemasonry. Consider these quotes from eminent Masonic thinkers,

“Man is a god in the making, and as in the mystic myths of Egypt, on the potter’s wheel he is being molded. When his light shines out to lift and preserve all things, he receives the triple crown of godhood, and joins that throng of Master Masons who, in their robes of Blue and Gold, are seeking to dispel the darkness of night with the triple light of the Masonic Lodge.” – Manly P. Hall.2 Manly P. Hall, The Lost Keys of Freemasonry; Macoy Publishing and Masonic Supply Company, 1954, originally published in 1923, p.92.

“MAN IS IMPELLED TOWARD PERFECTION! There is that within man – his innermost divinity – which informs him of the possibility of attaining completeness of being and urges him on to strive for that attainment.” – George H. Steinmetz.3 George H. Steinmetz, The Royal Arch: Its Hidden Meaning; Macoy Publishing and Masonic Supply Company, 1946, p.84, capitals in original

The following statement by J.D. Buck, a proponent of spiritual Masonry from the past century, simply drips in the definitive human boast,

“It is far more important that men should strive to become Christs than that they should believe that Jesus was Christ. If the Christ-state can be attained by but one human being during the whole evolution of the race, then the evolution of man is a farce and human perfection an impossibility… Jesus is no less Divine because all men may reach the same Divine perfection.”4J.D. Buck, Mystic Masonry and the Greater Mysteries of Antiquity; Regan Publishing, 1925, p.62

Such thinking, however, is hardly limited to Freemasonry.

When doing research at the SUN gathering in 1999 – the conference of the Spiritual Unity of Nations – I encountered people who claimed to be in contact with space-beings. The New Age movement is laced with such assertions. Like other “angelic” messengers who preach a gospel of self-deity, these extraterrestrials were peddling the same fruit as found in Genesis 3: We are imparting special knowledge… you are divine, you are God… you will never truly die but advance from stage to stage before absorption into the cosmos…

During SUN ‘99, a Broadway entertainer who had produced gospel records walked into our midst, singing, “I am the Alpha and Omega, the First and the Last… I am the Word of God… I am the King of Kings and Lord of Lords… I am that I am.” At the end of her song, the conference moderator exclaimed to everyone: “The Christ within me salutes, honors, and respects the Christ within each and everyone of you.”5 You can read about this interaction in Game of Gods: The Temple of Man in the Age of Re-Enchantment

Indeed, the language of we-are-gods is endemic within the literature. In Ken Carey’s “starseed transmissions,” channeled messages from entities posing as angels and extraterrestrials, we read the following:

“You are the Presence of God. God is present on Earth because of you.”6Ken Carey, The Starseed Transmissions; HarperSanFrancisco, 1982/1995, p.51

Solara, a star-being whose channeled communications started a religious movement called the Star-Borne, tells us that we too are star beings. Through “doorway rituals” we can awaken to who we really are, and together discover our destiny in a non-dual reality. Solara reminds us of our Divine Origin – that we are star-children, Angels on Earth, and that we must “return to the Light of Oneness,”7Solara, The Star-Borne: A Remembrance for the Awakened Ones; Star-Borne Unlimited, 1989, p.151

“We are called to unite together in a group initiation as One, binding the family of humanity into a collective whole. Our primary identifications with ourselves shall be with the One which we truly are – you, me, and everyone else combined.”8Solara, The Star-Borne: A Remembrance for the Awakened Ones; Star-Borne Unlimited, 1989, p.279

But there’s more: We must return to the Light with the other angels, specifically Lucifer, who, according to Solara, came to Earth as a beneficial volunteer – a star-seed traveling on a Golden Beam of Light – to interlock with matter.9Solara, The Star-Borne: A Remembrance for the Awakened Ones; Star-Borne Unlimited, 1989, p.136 In this teaching we arise and take our place in full union,

“Eventually, if we achieve our chosen task on planet Earth to transmute duality into Oneness, then Lucifer, too, with his fallen Angels, must rise up into the Light to once again sit at the right hand of God as one of the brightest of the Angels. For nothing and no one is to remain separate from God. Within the Greater Reality, everything is God.”10Solara, The Star-Borne: A Remembrance for the Awakened Ones; Star-Borne Unlimited, 1989, p.138, italics in original

Or as another alien channeled:

“The Second Coming is imminent, and you may as well get ready. This is a particularly good idea because you’re it. You are the Second Coming… Become your own Messiah.”11Zoev Jho, E.T. 101: The Cosmic Instruction Manual for Planetary Evolution; HarperSanFrancisco, 1995, pp.44-45

The concept of “saving ourselves” isn’t consigned to the New Age movement or extraterrestrial messages. There is a technical flavor as well. Indeed, the transhumanist movement is noted for its god-talk.

Back in 1994, Kevin Kelly – then editor of Wired magazine – openly dabbled in god-talk when considering the direction of virtual reality and the possibilities of a techno-hive,

“Stripped of all secondary motives, all addictions are one: to make a world of our own. I can’t imagine anything more addictive than being a god… Godhood is irresistible.”12Kevin Kelly, Out of Control: The Rise of Neo-Biological Civilization: Addison-Wesley Publishing, 1994, p.233. The book was also published under the title, Out of Control: The New Biology of Machines, Social Systems, and the Economic World

Professor John Glad, of whom I had the opportunity of visiting in his Washington DC apartment, was convinced that the technical children of men – Artificial Intelligence and advanced robotics – would someday acquire divine status. In an on-camera interview he asked: “Will the computer have a God? Will God have a God?”13Dr. John Glad, interviewed by Carl Teichrib for Magnum Veritas Productions, LLC., February 19, 2013. Location: John Glad’s apartment, Washington, D.C.

And so the shockwaves of the Genesis 3 catastrophe spread, and mankind continues to engage in Divine Identify Theft – worshiping the creation instead of the Creator – and reaping the whirlwind of our hubris.

I am reminded of a line from Psalm 4. The context is David’s confident prayer for deliverance, and in rebuking his enemies in verse two, a profound truth emerges. Differing translations offer variations, but the heartbeat remains:

The words of Christian philosopher and cultural critic, Francis A. Schaeffer, echoes this warning – an admonition we must, each one of us, take to heart: “[it is my] hope that this generation may turn from that greatest of wickednesses, the placing of any created thing in the place of the Creator, and that this generation may get its feet out of the paths of death and may live.”14 Francis A. Schaeffer, How Should We Then Live? The Rise and Decline of Western Thought and Culture; Fleming H. Revell, 1976, p.258Ω

Carl Teichrib is a researcher, writer, and lecturer focusing on the paradigm shift sweeping the Western world, including the challenges and opportunities faced by Christians. Over the years he has attended a range of internationally significant political, religious, and social events in his quest to understand the historical and contemporary forces of transformation – including the Parliament of the Worlds Religions, Burning Man, and the United Nations Millennium Forum. Since the mid-1990s, Carl’s research has been utilized by numerous authors, media hosts and documentary producers, pastors, professors and students, and interested lay people. From 2007 until the end of 2015, he edited a monthly web-based magazine, Forcing Change, documenting and detailing the worldview revolution underway – points of pressure, forces of change.

He frequently speaks to church groups, in conference settings, and occasionally teaches a modular course on Secular/Pagan Trends at Millar College of the Bible.