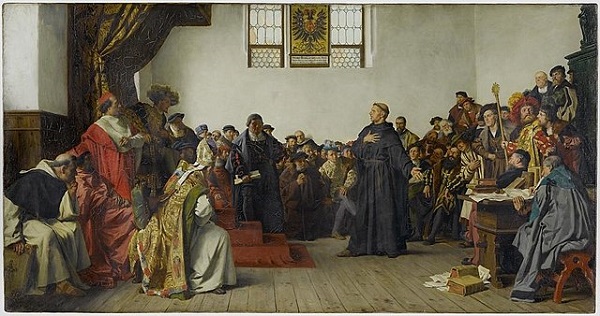 Luther at the Diet of Worms, by Anton von Werner, 1877

Standing on conviction can be an intimidating and scary proposition. Publicly standing on an unpopular conviction, in the woke “cancel culture” of our day can perhaps drive even the braver hearts to seek shelter. There is much hatred in the land today aimed at Christians, the Bible – and just plain hatred of almost any truth, no matter how blatantly obvious that truth may be to us.

So, we can well appreciate the courage of Martin Luther, who had to stand before the Diet (assembly) of Worms in 1521 where he was commanded to repudiate his writings and positions which were contrary to official Roman Catholic teaching. His response was unequivocal:

Unless I am convicted by Scripture and plain reason (I do not accept the authority of popes and councils because they have contradicted each other), my conscience is captive to the Word of God. I cannot and will not recant anything, for to go against conscience is neither right nor safe. So, help me God. Amen.

It is historically uncertain if his famous line, “Here I stand, I can do no other, so help me God. Amen,” was delivered in that meeting or added under his supervision in his collected works, but certainly his demeanor and the rest of his remarks on that day demonstrate the spirit of the quote. We wonder if he appeared larger than life to the onlookers as he stood unmoved in his commitment to God, to the scriptures, and to truth over intimidation.

In the book of Daniel, chapter 3, we have the story of King Nebuchadnezzar, who built an idol 90 feet tall and 9 feet wide. At the dedication of the idol the king had musicians on hand with the instruction that when the music began to play, everyone was to fall down and worship the idol – on pain of death. Most everyone did too, except for three men – Shadrach, Meshach, and Abednego –who had been appointed over the affairs of the province of Babylon. Because of their faith in God, Who forbids all idol worship, they refused the order and remained standing. How tall they must have looked to those who were lying on the ground! A group of men who hated the Jews took the opportunity to gleefully report their impudence to the king, who was very angered at their audacity. Before the king himself, these three men gave a “Here we stand, we can to no other” type of answer. The infuriated king declared if they didn’t relent, into the fiery furnace they would go. Their response?

If this be so, our God whom we serve is able to deliver us from the burning fiery furnace, and he will deliver us out of your hand, O king. But if not, be it known to you, O king, that we will not serve your gods or worship the golden image that you have set up. (Daniel 3:17)

Interesting. They respectfully made it clear that they would not defy God to please even the most powerful king on Earth! God is able to deliver us, they said, but whether God delivers them or not they must stand on their conviction and commitment to God on this issue.

A very current glimpse of personal integrity and faith in the face of great intimidation has unfolded in the world of sports this past week. The Orlando Magic’s forward, Jonathan Isaac, was the lone player standing while the entire rest of the team took a knee during the pregame national anthem. At 6 feet 11 inches he is already tall, but with everyone around him kneeling, he really stood out. He was the focal point in the photo taken at the time. He is not the only athlete who did not buckle under the great pressure, but he is one of very few. In an interview with Taylor Rooks after the game, he was asked why he took that stand. Isaac replied:

“I do believe that Black lives matter, but I just felt like it was a decision that I had to make, and I didn’t feel like putting that shirt on and kneeling went hand in hand with supporting Black lives. I believe that for myself, my life has been supported by gospel, Jesus Christ, and everyone is made in the image of God and that we all forge through God’s glory.

Of course, black lives matter, and matter very much, but the group, #Black Lives Matter, is a thoroughly anti-Christian organization founded, by their own admission, committed Marxist people. Together with a likewise radical anti-Christian movement named Antifa, other assorted like-minded radical organizations, and allied with certain Muslim groups, they seek nothing less than to destroy this nation, the Christian Church and indeed faith in God.

The stand that all these brave men of faith took was very public. They stood alone. There was no earthly benefit to gain by taking these stands. In fact, in the case of Martin Luther, standing up to the powerful Catholic Church, and the three young Jewish men standing before the pagan king, their very lives were put at grave risk. In the case of Jonathan Isaac, his life may not be endangered but it may be that his livelihood had been put on the block. “Cancel culture” is hate driven and unforgiving. Yet in all these cases, these faithful men, in a very public way, took their stand and pointed unwaveringly to the One to whom they had committed their lives, and in whom they trusted.

In the case of Shadrach, Meshach, and Abednego, who were saved by their God (and ours) in the fire and came out unharmed, King Nebuchadnezzar was very impressed by their God’s great power and subsequently issued a sort of “Don’t mess with their God” sort of decree:

“Blessed be the God of Shadrach, Meshach, and Abednego, who has sent his angel and delivered his servants, who trusted in him, and set aside the king’s command, and yielded up their bodies rather than serve and worship any god except their own God. Therefore I make a decree: Any people, nation, or language that speaks anything against the God of Shadrach, Meshach, and Abednego shall be torn limb from limb, and their houses laid in ruins, for there is no other god who is able to rescue in this way.” (Daniel 3:28-29 ESV)

Martin Luther’s stand was not in vain either. From there he went on to launch the Reformation and the view that Scripture alone was sufficient for the rule of faith and practice. Because of the stand he courageously took, millions went on to embrace the wonderful truth that salvation is by grace alone, through faith alone in Christ alone. The Reformation literally changed the course of history. So important also was Luther’s biblical teaching that people can and should come into a direct relationship to the true God without the man-made religion of Roman Catholicism getting in the way and keeping people in bondage.

None of the individuals above were or are perfect. Martin Luther certainly wasn’t and wrote diatribes against the Jews when they rejected the faith. Yet God used this imperfect redeemed sinner in spite of himself, just as he always and ONLY uses imperfect men and women. God used three young slaves to show His glory, in spite of their less than ideal situation of living in the heart of pagan Babylon.

Here we are a little over 500 years after the Reformation, and although it is not likely that the courageous stand of Jonathan Isaac will have quite the same impact on our world as the Reformation, God has already used him greatly to offer his courageous standing profile of Christian faith instead of kneeling to the dictates of what is quickly becoming an overwhelmingly pagan (and seriously and frightfully misinformed) culture today.

Speaking of taking the knee, many people are rightly indignant at young foolish athletes taking a knee to godlessness and anarchy. It is a flat handed slap in the face to many of their loyal fans. Yet, in a time when many churches, theologians, seminaries, and even some denominations who should know better are turning from the Christian faith and taking a knee, gullibly embracing this “new” religion – which in actuality is the newly repackaged “religion” of godless Marxism – it is hard for us to lay the lion’s share of the blame on kneeling athletes who likely do not know any better.

The Church is at a crossroads today, for which she largely seems unprepared. Her detractors – the “satraps, the prefects, and the governors, the counselors, the treasurers, the justices, the magistrates, and all the officials of the provinces” (Daniel 3:3) –  and of course the news media, are throwing ever-more vicious accusations her way, and ultimately against her God, while an ungodly culture looks on, amused. Do not be deceived – they want nothing less than the complete destruction of the way of the cross. In the center spotlighted ring are (again) the religion of man vs. the people of God.

And if it sometimes feels as though the hounds of hell have been unleashed in the entire world today, maybe it’s because, as mankind turns its collective back on God, wanting nothing to do with Him, the hounds of hell are pouring in to the vacuum.

For we do not wrestle against flesh and blood, but against the rulers, against the authorities, against the cosmic powers over this present darkness, against the spiritual forces of evil in the heavenly places. Therefore, take up the whole armor of God, that you may be able to withstand in the evil day, and having done all, to stand firm. (Ephesians 6:12-13 ESV)Ω