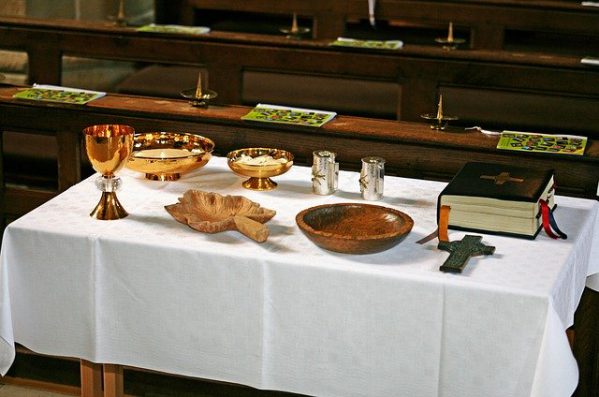 Image by pajala from Pixabay

This is one of the times each year that the secular media runs to famous atheists to gain insight into the “myth,” as they view it, concerning Jesus’s resurrection, the very heart of Christian belief. It is obvious that they do not believe that Jesus came out of His grave. They don’t know what to make of the Jewish Passover either, especially as it intersects with Christian belief.

The only familiarity they have of the Jew’s deliverance from Egyptian captivity comes perhaps from Charlton Heston’s portrayal of Moses in an old movie. They know something about the plagues that God brought upon Egypt, but are unfamiliar with the profound spiritual aspects of the final plague, the death of the firstborn, particularly how the Israelites were instructed to kill and prepare a lamb to eat and put its blood on the door lintel and posts, forming the shape of a cross. Those who obeyed that instruction had their firstborn protected (saved) as the angel went through Egypt and took the lives of the unprotected firstborn, including the son of Pharaoh (Exodus 11 & 12). This event foreshadowed the coming Messiah and savior of the world – when God incarnated and took on man nature died on a cross to save all of those who would believe.

Prior to His crucifixion, burial, and resurrection, our Lord hosted a Passover meal for disciples. The institution of Christian Communion springs from this meal, which is recorded in Matthew 26:26-29; Mark 14:22-25 and Luke 22:14-20. He told them that the bread they were eating represented His body, which was to be “broken” for them on the cross. He said the wine they took together represented His blood – shed for them (to secure their salvation) on the cross.

The Apostle Paul spent time in his first letter to the church in Corinth correcting their bad behavior in observing Communion, or the Lord’s Table:

Notice, he doesn’t mention how often Communion should be celebrated by the church, but said, “… as often as you eat this bread and drink the cup…”

But however often they did celebrate it, they were to celebrate it in a spiritual and worthy manner.

Roman Catholics and Jehovah’s Witnesses both practice a form of the Communion celebration. Both are celebration rituals but are completely different in their performance – and both are quite different from Evangelical Christian understanding of the purpose and meaning of Communion, the Lord’s Supper.

The Roman Catholic Church in our area celebrates the sacrament of communion twice a day, six days a week and once on Saturday. That is very often. Most Roman Catholic churches across the world would have at least that many communion services, numbering into the hundreds of thousands around the world each day. In the Catholic view, the “host” (bread) actually becomes the physical flesh of Jesus, and the wine transforms into the physical blood of our Lord. So, when the participant receives communion, they are ritually receiving Christ in a physical way with spiritual benefits. It is part and parcel of working one’s way toward eternal salvation, which is dispensed by the Roman Catholic Church at the hand of the priest.

A friend of ours, Pastor Jim Westervelt, was leading a Communion service at a conference of ex-JWs where he pointed out that the true significance of communion is not that Christ is in the elements but that Christ is in the participants. That is something the Roman Catholic misses. In their doctrine, it is important that Christ is physically in the elements because the participant is ritually receiving Christ and must return again and again to continually receive Him, or they will be lost. That is why the “Last Rites,” where Catholics are given “final communion” is so important for Catholics to receive before dying.

The Watchtower Bible and Tract Society, i.e. Jehovah’s Witnesses also hold a celebration, but not nearly as often as Roman Catholics. It is held once a year, meant to correlate with the Jewish Passover. The purpose of their ritual is very different. JWs do not celebrate Christ’s resurrection, for in their teaching He wasn’t resurrected at all, but is “dead forever dead.” Instead of raising Jesus’s body, Jehovah allegedly created a replacement for Him, Michael the Archangel, who even now is in heaven. Someday a recreated clone of a faithful JW of the elite “anointed” class may meet Michael in heaven, but they will never meet the Jesus Who lived and died for them. Likewise, of course, Michael nor anyone else will be meeting the actual faithful JW who schlepped Watchtower magazines from door to door, but a mere copy of him with no personal connection whatsoever! But we digress. (see Resurrection: Watchtower-Style)

So rather than celebrating the resurrection, JWs gather once a year to celebrate the Memorial of Jesus’ Death. (This year they will do it online).  Quite opposite of the Catholic ceremony of ritually accepting Christ, the rank and file JWs ritually reject Christ! How so? In their teaching, only the anointed elite class of 144,000 may actually partake of the elements. The lower earthly class, the so-called “other sheep,” pass the elements down the row without partaking. And since most – if not all by now – of the “elite class” of the 144,000 have gone on to their heavenly reward, or rather their clone has gone on to receive their reward, since they are dead forever dead just like Jesus, NO ONE in most JW congregations partake of the elements at all! They just pass them around, everyone rejecting Christ’s sacrifice in their turn! Very sad…

The above rituals are deadly for all eternity. All who call on His name are born again (Romans 10:9-13) in a single act. No true child of God needs a daily refill at the hand of a Priest. Christ indwells them permanently, and they are His forever. On the other hand, no true Child of God will reject partaking of the symbols of His body and blood. Just receive Him once, by believing in His sacrifice on your behalf and His resurrection and you have eternal life. Now that is something to celebrate!Ω