That’s What I Get for Praying 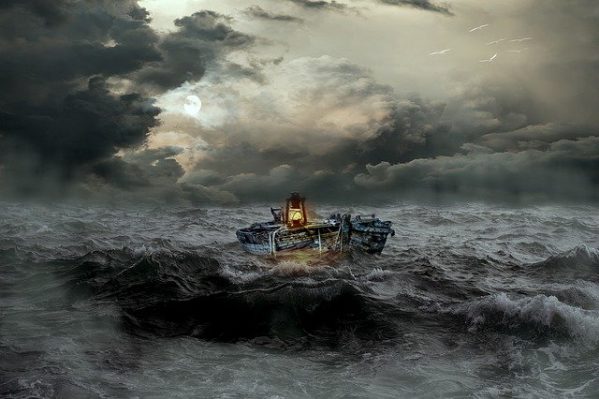 In the classic Christmas movie, “It’s a Wonderful Life”, George Bailey, not a religious man, becomes desperate enough with his life circumstance to pray for God’s help. Immediately following the prayer, an angry man comes over and punches him hard in the jaw. As he picks himself up, we hear Bailey remark under his breath, “That’s what I get for praying.” No doubt about it, George was in desperate straits. His uncle “Billy,” who works with him at the Bailey Building and Loan, unwittingly dropped a large financial deposit from their business into the lap of the malevolent banker, Mr. Potter. Potter, always looking for a way to take over the Building and Loan, concealed the money and accused George of financial impropriety, which would likely lead to prison time. George, having looked everywhere for the missing money, decided to give prayer a chance. But like so many of us, George mistakes the very next thing that happened to him as God’s answer to his prayer. In this case, he believed the punch in the jaw was essentially from the Almighty.

Hollywood is not, generally speaking, a great theology teacher. To be sure, this film “teaches” some very bad theology based on popular cultural ideas. For one, George, who has no real relationship with God, is depicted as a “good man,” though the Bible teaches that without God’s gift of righteousness, there are no good people. Secondly, human beings do not become angels after death and advance to the point of earning their wings as Clarence did in the story. There are surely other problematical themes in the movie, yet there are two important elements in the story which are valid. God knew in advance George would be in trouble and had set the wheels in motion to answer his prayer. Second, the first thing that happened to George after he voiced his prayer was not God’s answer.

As human beings, we view things from the perspective of our immediate situation, and what we think are God’s answers to our prayers, whether reward or punishment, are based on how we feel in any given situation. This is nothing new, nor are these feelings only experienced by non-believers. We see this common error in one of the heroes of the faith, King David, as he was experiencing great spiritual inner turmoil in Psalm 42. We are given an outsider’s look at his “self-talk,” showing us the war within his soul of his faith vs his doubt concerning God’s goodness and dependability. Essentially, David is arguing with himself:

“I should trust God. Why is He letting these things happen to me? He is a solid rock and my salvation. Where is He at when I really need Him?”

An example of this inner battle is found in Psalm 42:8-9:

By day the Lord commands his steadfast love, and at night his song is with me, a prayer to the God of my life. I say to God, my rock: “Why have you forgotten me? Why do I go mourning because of the oppression of the enemy?”

Therein lies David’s quandary. God loves me and is steadfast. I have His song in the night, and I pray to Him, the God of my life. He is “my rock” – but where is He NOW when I need Him so desperately???

There is the story of 19th century businessman and attorney Horatio G. Stafford. He wrote the classic and beautiful hymn, “It is well with my soul.” From the article, “Story behind the song: It is well with my soul,” we learn Spafford and his wife lost a son to pneumonia. And, Spafford had been quite a wealthy man, but he lost much of his business to the Chicago fire in 1871. Two years later, his wife and their four daughters were traveling by ship to Europe where he planned to meet them. Enroute, their ship collided with another ship and sank. All four daughters perished. Anna Spafford was rescued and when she made land sent a telegram which read, “Saved alone, what shall I do?” Another of the ship’s survivors claimed she said, “God gave me four daughters. Now they have been taken from me. Someday I will understand why.”

We do not know what inner feelings this mother may have had to struggle with, but that is a wonderful statement of faith.

Horatio Spafford took a ship to go to his wife. When the ship reached the spot where the tragedy occurred, the captain called Spafford’s cabin to let him know. We have seen film character George Bailey’s anguished response to personal tragedy, and King David’s turmoil recorded in the Psalms. Here we have Horatio Spafford’s reflections, grief and worship recorded even in the first verse:

When peace like a river attendeth my way,
When sorrows like sea billows roll,
Whatever my lot, Thou hast taught me to say,
It is well, it is well with my soul.

As we listen to this classic hymn, we find Spafford’s explanation in the third stanza compelling. His attitude was not something he possessed naturally. God taught him to be able to say in good times – and when tragedy is almost overwhelming – “it is well with my soul.” That sounds remarkably like something the Apostle Paul wrote:

I know how to be brought low, and I know how to abound. In any and every circumstance, I have learned the secret of facing plenty and hunger, abundance and need. I can do all things through him who strengthens me. (Philippians 4:12-13 ESV)

What comforted Spafford in the midst of overwhelming tragedy? He looked beyond his immediate circumstance to the One Who delivers:

Though Satan should buffet, though trials should come
Let this blest assurance control
That Christ hath regarded my helpless estate
And hath shed His own blood for my soulΩ