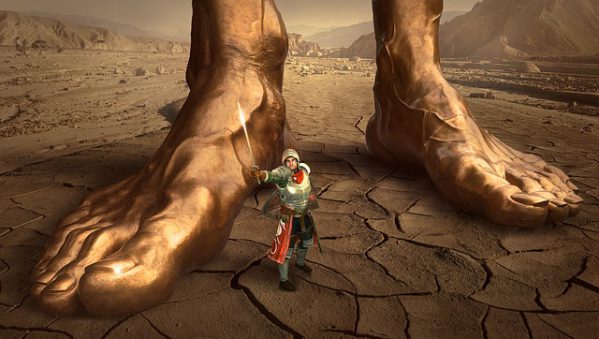 Image by Stefan Keller from Pixabay

Many people dive into discussions about giants without defining the key term: Just what is a giant? The definition is not as simple as it may seem, since some may employ it metaphorically such as referring to a giant of industry. Sometimes, it is used to describe someone who is a foot taller than average; other times, it refers to someone who is many feet taller, an entire body length taller, or, perhaps, various body lengths taller. So, just what is a giant?

When it comes to the biblical context, there are at least four issues to consider:

There is no biblical Hebrew word for someone who is taller than average—and note that Hebrew males of biblical times averaged 5.5 ft. or less.2“Jewish men … were 5 feet 0 to 5 foot 3 inches tall”; Clyde E. Billington, “Goliath and the Exodus Giants: How tall were they?” Journal of the Evangelical Theological Society, 50.3 (2007), pp. 489–508. Also, it is generally a terrible practice to translate more than one Hebrew word utilizing only one English word. The two Hebrew words that are (pseudo) translated by some as giants are Nephilim (only at Genesis 6:4 and Numbers 13:33) and Repha/Rephaim (multiple times including Genesis 14:5, Deuteronomy 2:11, and Joshua 12:4).

In the previous article in this series, The Nephilim Files, I noted we have no reliable physical description of Nephilim, and that they did not make it past the flood—did not survive, did not return, and never will. We should not chase the English word giants around a Hebrew Bible.

The problem is that rendering both words Nephilim and Rephaim as giants only causes confusion. This is especially true for those who do not read for context and those who engage in that which I term KWBT (Keyword Based Theology), whereby they look up keywords and string the text in which those words are found into a doctrine regardless of the meaning given to the words by the context.

As per the original, traditional, and majority view among the earliest Jews and Christians alike (for centuries): Nephilim were strictly pre-flood hybrids, Rephaim were strictly post-flood humans; and there is no relation between them whatsoever.

Issue #2. References to heights of Goliath and an unnamed Egyptian

Goliath is specifically said to have been a Philistine (an inhabitant of Philistia). They are considered Anakim (long-necked), and they are considered Rephaim [2 Samuel 21:22 refers to those “born to the giant (Repha) in Gath, and they fell by the hand of David].31 Samuel 17:1 “Philistines gathered their armies for battle,” Joshua 11:22 “There were no Anakim left in the land of the sons of Israel; only in Gaza, in Gath, and in Ashdod some remained,” note the reference to Gath which is where Goliath is from, and Deuteronomy 2:10-11 “the Anakim…are also regarded as Rephaim.”

The issue with Goliath is that there is a discrepancy regarding his height: Greek manuscripts have him at just shy of 10 ft., whilst Hebrew manuscripts, the Dead Sea Scrolls, and the historian Flavius Josephus have him at just shy of 7 ft. Yet, his height is hardly relevant since the emphasis was on the fact that as a trained and experienced solider, he was a “champion” (1 Samuel 17:4) and quite an intimidating champion who even at 6.5 ft. would have been impressive to 5.5 ft. or less Hebrews.

The other specified height is within a reference to “an Egyptian, a man of great stature five cubits tall,” or 7.5 ft. (1 Chronicles 11:23).

Some argue that King Og of Bashan’s height is either stated or implied (and note he too was a Repha, Deuteronomy 3:11). Yet, we are only told of the size of his bed, which was 13.5 x 6.0 ft. (9 cubits by 4 cubits), but nothing is said of his personal height. Certainly, you could measure my bed and get a good approximation of my height, but you could also think I am five times wider than I actually am. However, bed widths can vary for any number of reasons. It may to accommodate possible number of side-by-side occupants or to occupants desiring more room. Today’s bed lengths, at least, seem to remain within a standardized length relative to any number of desired widths. The largest recorded bed is 86 ft 11 inches long and 53 ft 11 inches wide. There are even companies which “start with sizes as small as 8 x 7 foot and go to sizes of 10 x 12 foot and beyond!” Nonetheless, I am not a king, and it has been historically true that wealthy people are often quite lavish—for example: A ten-bedroom mansion for two people and one child, a limousine for one person, etc. and even super-sized beds (my book What Does the Bible say about Giants and Nephilim? provides examples via Alexander the Great).

Deuteronomy 2:10, 21, 9:2; Isaiah 18:2, 7, 45:14 employ various different Hebrew words and are generic references. References translated tall traditionally mean tall except after it has been prepped with an un-contextual Nephilim flavor by those who suppose they were giants (whatever that means), in which case tall means whatever the subjective mind will make of an undefined word.

Some think in terms of giants who are various body lengths taller than average humans due to the mistaken belief the description of the rebuked spies in Numbers 13:32-33 was literal rather than hyperbole. The rebuked spies were less than reliable, made three claims about which the whole rest of the Bible knows nothing, they contradicted Moses, Caleb, Joshua and God, and who Scripture records as having presented a “bad report” (Numbers 13:32). So, why believe them? More to the point, why build two entire doctrines, post-flood Nephilim and their size, upon one single verse by unreliable testimony?

The Amorites are said to be “strong as the oaks” (Amos 2:9) Now, based on that, who would propose a literal one-to-one correspondence ratio comparison between the strength of a person and the strength of oaks (and green living oaks or dead dry ones?)? Anyone? Anyone? Of course, no one would (or, no one should), as it is clearly a simile.

However, since the same text tells us their “height was like the height of cedars,” some demand that, indeed, a literal one-to-one correspondence ratio comparison is to be calculated and therefore, Amorites were 40-60 ft. tall!

Yet, there are at least two issues here: One is that clearly, the text is merely telling us that the Amorites were very big and strong. The second is that the deceptions of the rebuked spies’ in Numbers 13:33 included the claim that Nephilim were tall enough to make average Hebrew seem like grasshoppers in comparison. Applying a literal one-to-one correspondence ratio comparison between an average Hebrew and a grasshopper would result in Nephilim being 363 ft. tall─as tall as a 30-story building!

Additionally, if one actually believes the spies’ “evil report” and proposes a literal one-to-one correspondence ratio comparison, they actually will have figured out that God is also 363 ft. tall. How so? Because Isaiah 40:22 refers to God “who sits above the circle of the earth, and its inhabitants are like grasshoppers.” So who will take the simile literally now? No one (hopefully). Thus, the Bible is clear and interprets itself: comparisons to grasshoppers are similes just like we might look down from a very tall building and say, “Those people look just like ants.”

When it comes to the Bible, we find the word giants used in some versions, but we do not find anyone therein who is taller than the tallest pro-basketball player of today─none of whom quite make it to 8 ft. Taller people have existed, but the Bible is not specific on any such thing.

So, how and why were both Nephilim and Rephaim rendered as giants by some? Well, that is a complex issue which I will put succinctly (see my book on Nephilim and giants for details) as being due to the rendering of Greek and Hebrew/Aramaic.

Hebrew and Aramaic are sister languages and Nephil is thought to derive from the Hebrew root naphal and/or the Aramaic root naphiyla. The LXX/Septuagint renders Nephilim as gigantes which literally means earth-born and implies nothing about height. Some claim this implies they must have been very tall, because the term gigantes/gigas is used in Greek mythology of Titans. However, it is not that simple for various reasons including that the term still merely means earth-born. It may have been correlated to Titans, because the description of the famous, fabled beings were as large as Nephilim but, perhaps also, because both were infamous or both were hybrids. Supposedly, there was more than one generation of Titans (the first of which were described as so gigantic that they spanned between the Earth and sky, some had 100 hands and 50 heads, some were hybrids).

J. Edward Wright is the Endowed Professor of Judaic Studies. He is also the J. Edward Wright, Ph.D., who is the Director of the Arizona Center for Judaic Studies at the University of Arizona. He writes, “The term traditionally translated as ‘giants’ in both the Greek Septuagint (γιγαντες) and now in English is נפילים nephilim, a term based on the root נפל npl meaning ‘fall.’ It has nothing to do with size” and specifies that this goes for both Hebrew and Aramaic as “The root npl in Aramaic also means fall and not giants.”4Private communique with Ken Ammi, July 2019

As to why Rephaim was rendered giants by some? Well …, that is truly mysterious. And, by the way, it does not mean giants just because Bible-based dictionaries and lexicons claim, ex post facto, that it means giants. The term Repha is a complicated one, and it has its roots in everything from healing to death, but unusual height is not one of its implications (I have a whole chapter on Rephaim in my book).

Lastly, tall tales about giants are mysterious and exciting, but they are not biblical—just like within the referenced “evil report,” tall tales are tall tales.Ω