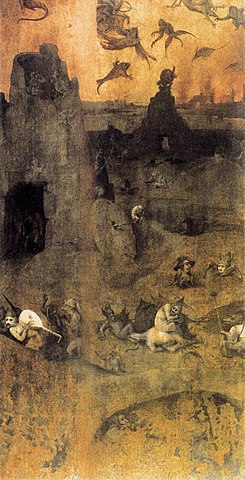 The Fall of the Rebel Angels by Hieronymus Bosch is based on Genesis 6:1–4 (Public Domain)

An online search for “Nephilim” just yielded “About 20,900,000 results” so the Bible must be saturated with references to them: here is every biblical reference to Nephilim:

The Nephilim were on the earth in those days, and also afterward, when the sons of God came in to the daughters of men, and they bore children to them. Those were the mighty men who were of old, men of renown (Genesis 6:4 NASB).

There also we saw the Nephilim (the sons of Anak are part of the Nephilim); and we became like grasshoppers in our own sight, and so we were in their sight (Numbers 13:33 NASB).

Nephilim have been a subject of fascination for millennia partly because of their brief mention. Authors of apocrypha, historical fictions, folklore, and modern day hoaxers love to make much ado about not very much so as to fill in the Bible’s gaps. Subsequently, if the Bible only tells us two things about Nephilim, that leaves a lot of room for speculative accretion—to the point that many neo-“ministries” are literally established upon the issue of Nephilim.

One reason Nephilim are fascinating is due to the brevity of Genesis 6:1-4 which refers to the “sons of God” (v.2) marrying and mating with “daughters of men” (v.2) along with a reference to “…his [man’s] days shall be one hundred and twenty years” (v.3) and the verse quoted above. Each of these verses could yield an article of its own, each with its own who, what, when, where, why, and how.

The original, traditional, and majority view among the earliest Jews and Christians alike is that these “sons of God” were Angels (see my book On the Genesis 6 Affair’s Sons of God: Angels or Not? which chronicles commentaries dating 250 BC-5th century AD). However, regardless of your view, the fact is those two verses are all we have, biblically, that mention Nephilim.

Genesis (6:4) tells us “The Nephilim were on the earth in those days, and also afterward” (I will help the English by adding as a result of) “when the sons of God came in to the daughters of men … .” This occurred “… when men began to multiply on the face of the land, and daughters were born to them” (v.1) which could have been as early as when Adam and Eve’s children started having children.

That was “in those days,” so when was “and also afterward” (v.4)? Some say afterward means after the flood, but we are dealing with v.4 and the flood is not even mentioned until v.17. The text tells us exactly what it means since it reads “also afterward, when the sons of God came in to the daughters of men, and they bore children to them;”: so, when they first did so, and after they first did so─as in, they kept doing so.

The only survivors of the flood were Noah, his family and some animals. Thus, the tale of the Nephilim textually ends as quickly as it began: they did not make it past the flood, the Bible speaks nothing of post-flood Nephilim, they did not return, and never will—period. Any concept of post-flood Nephilim, including a future return of them, implies that God failed: He meant to be rid of them via the flood (along with humanity sans Noah and family), but He could not accomplish His will.

But God inspired Moses to tell us of post-flood Nephilim in Numbers 13:33, right? Wrong. God inspired the reporting of Satan’s fear-provoking, false statements, but we should not believe Satan’s lies. Likewise, Numbers 13:33 is the mother of all Nephilim texts (all two of them), since it is used to interpret Genesis 6.

The spies speak well of the land saying, “… it certainly does flow with milk and honey …” (v.27) Question: If you saw beings compared to whom you were like grasshoppers, is the second thing you would say when you get back to camp, “The land is nice”?

They continue, “the people who live in the land are strong, and the cities are fortified and very large …” (v.28). Need I ask the question again? Note that these itinerate wilderness dwellers are intimidated by fortified, well-protected cities.

They “… saw the descendants of Anak” (v.28) plus Amalek, Hittites, Jebusites, Amorites, and Canaanites (v.29). Oops, they forgot to mention the most notable things they saw!

The ten spies are so intimidated that they want to forgo God’s command/promise (v.2) to take the land, but Caleb (and Joshua) encourage the people (v.30).

Moses tells us specifically at this point that “… they gave … a bad report of the land …,” (v.32) even though what they said to this point contained discouragement, they were speaking accurately of the land, but no more.

And what was the content of their “bad report”?

The spies had given a good report of the land itself; but all of a sudden they report, it “… is a land that devours its inhabitants …” (v.32).

Earlier, they did not even mention Nephilim; but now, “… we saw the Nephilim (the sons of Anak are part of the Nephilim); and we became like grasshoppers in our own sight, and so we were in their sight” (v.33).

They had already mentioned that they “… saw the descendants of Anak there” (v.28); but all of a sudden, they are related to Nephilim (v.33).

Genesis 6 offers no physical description of Nephilim, so we have no idea if they were even one inch taller than average; but the ten spies claimed that Nephilim were very, very tall (“giants” v.33).

In short, what they say last is that which they logically would have said first and maybe eventually stated, “Oh yeah, the fruit is tasty; but, like, whatever.”

They wove a don’t-go-into-the-woods style, tall tale. The ones who claimed they saw Nephilim were not the Israelites in toto, nor even all of the spies, but only the unfaithful, disloyal ten who were rebuked for their “bad report” (Numbers 14:11).

And their report was not only bad due to it being rebelliously discouraging, but they made three claims about the Nephilim of which the entire rest of the Bible says nothing: 1) That there were post-flood Nephilim; 2) That Anakim are related to Nephilim; and 3) That Nephilim are very, very tall.

In fact, the Bible often goes on to tell us of the peoples of the land, of the people around the land, of battles, even of hand-to-hand combat, but Nephilim are never mentioned one single time outside of Numbers 13:33 (and we should never build a doctrine on one verse).

And if you are thinking of appealing to the many post-flood references to giants well, you will have to wait until the next segment.

PS: in apocryphal tales, Nephilim are often described as so large that they would never be able to grow that big and would shatter their bones simply attempting to take a step. Also, post-flood Nephilim are only mentioned in 1 Enoch/Ethiopic Enoch wherein they live post-flood only as spirits and in Jubilees wherein they only make it to the time of Noah’s grandsons.Ω