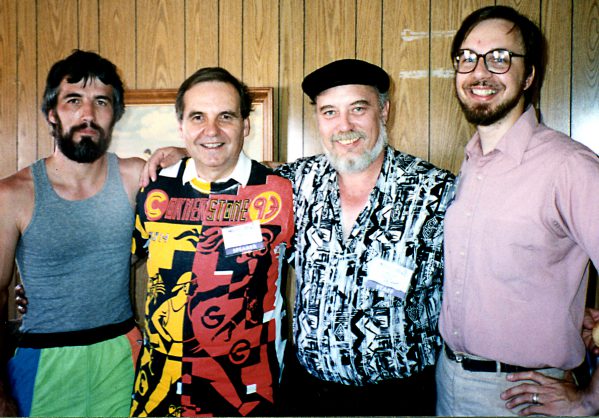 Bill shares the story of the events that took him from being a young pastor in Chicago’s Cabrini Green through some unexpected turns which put him in a unique relationship and friendship with Dr. Geisler, being Geisler’s assistant for three and a half years (Fall 2007—Spring, 2011). God used Norm to change his life. Our very own Dr. Jonathan Miles, gave his tribute in last week’s blog, Nothing Like a Storm. Dr. Geisler had a substantial impact on his life trajectory as well. Norm seemed to have that effect on people.

My Norm story is slightly different. I am not an academic but am, as Norm and I dubbed it, “an apologetics street fighter.” I grew up as an atheist and became a Christian in 1974 after my son was born. Joy and I had a passion for reaching the lost and God brought some Jehovah’s Witnesses into her life. She loved them and wanted to reach them and asked me to help. We read everything we could get our hands on in order to understand JWs and their peculiar doctrines and listened to scores of cassette and video tape teachings and testimonies. That’s how we got our start in this ministry, which eventually blossomed into reaching cultists of many other groups as well and providing help and information to their bewildered family members.

By and by we saw Norman Geisler on the John Ankerberg Show. What a mind! We began buying his books and audio cassette tapes. (If you don’t know what an audio cassette tape is, we are sure Google could provide information on them). We had become “missionaries,” not only to JWs but many other cult groups as well. The doctrines we dealt with and were called on to defend the most in our work were the inerrancy of Scripture, the deity of Christ and the physical resurrection. When you are a missionary to cults all three of these are challenged on a regular basis. Norm addressed these doctrines in an understandable way.

In 1990, From Grave to Glory: Resurrection in the New Testament: Including a Response to Norman L. Geisler by Murray J. Harris was released. At the Witnesses Now for Jesus Convention in October of that year, our friend and fellow apologist Duane Magnani did a presentation on the book because Murray Harris was essentially teaching Jehovah’s Witness doctrine regarding the resurrection in his book. Murray Harris was a professor at a highly respected leading evangelical seminary. Duane called for us, the assembled missionaries to JWs, to take a stand for the resurrection. Little did we know at the time where that would take us.

The first day of the event I found myself meeting and talking with pastors that were there. I was absolutely shocked when perhaps 50% of them asked, “How do you know the resurrection was physical?” I couldn’t seem to keep myself from responding, “Have you read the Bible?” I wasn’t exactly scoring points with these folks. In the late afternoon a sort of regular looking guy, not physically large in stature, sporting a t-shirt and carrying two ice cream cones came around the corner, walked up to the table and said, “Have an ice cream, I’m Norm Geisler” and thus began a friendship which lasted nearly three decades. And what a friend he was. He was very encouraging and instrumental in our starting Midwest Christian Outreach, Inc and we also shared a similar very corny sense of humor as well as a passion for the lost. He was my mentor and sounding board.

As many of the current articles and Wikipedia point out, Norm authored or co-authored over 90 books and hundreds of articles. He co-founded two seminaries. He was “One of the primary architects of the Chicago Statement on Biblical Inerrancy.” With all of Norm’s academic achievements, he was ever the servant. I recall one year at Cornerstone we were both teaching and yes, sharing a hotel room. My back went out and I was struggling to put my socks on one morning. Without a word or moment’s hesitation, Norm stooped down, took my socks and put them on me. Not quite a foot washing but perhaps a modern-day equivalent of one.

After the “battle for the resurrection,” as we have come to call it, came to a successful and good conclusion, Joy and I were with Norm at an event. The three of us were just sitting off in a quiet space and Joy asked him how he stood up to the pressure and unpleasant blowback over these types of conflicts. It’s not all that pleasant to be considered a divisive person and disliked just for standing for the truth of scripture, and Norm took most of the slings and arrows because he was “the big guy.” Joy remarked that he was our hero in the battle for the resurrection. He was thoughtful for a moment and then with a bit of a smile said, “No, when I was in the midst of the fight I felt all alone in a valley while the battle raged, but then I looked up to see a band of counter-cult apologists riding over the ridge. I never knew they even existed, and God used them to turn the tide. You are my heroes.” (By which he of course meant the whole contingent of generally small apologetics ministries to cults who showed up and stood with him in the fight.) It is amazing how God puts people together to accomplish His purpose.

Joy too loved his books, lectures, and loved the person he was. As Joy tells it, one time he was surrounded by young male students clamoring to share deep philosophical ideas with him. Joy was kind of “outside the circle,” just watching and listening. He saw her sitting there, so he asked her what she thought of the issue they were discussing. It was so meaningful to her that he would make sure to include her. That’s not the only time she experienced that with him, and Marcia Montenegro of Christian Answers for the New Age, told Joy she had a very similar experience. Joy says, “Norm never talked down to people, no matter if they were young or old, male or female. He was/is a hero as a great man of the faith. We were blessed to know him, and to be accepted in his circle.” God used him to change our lives, and the lives of so many others. Now he’s home…Ω