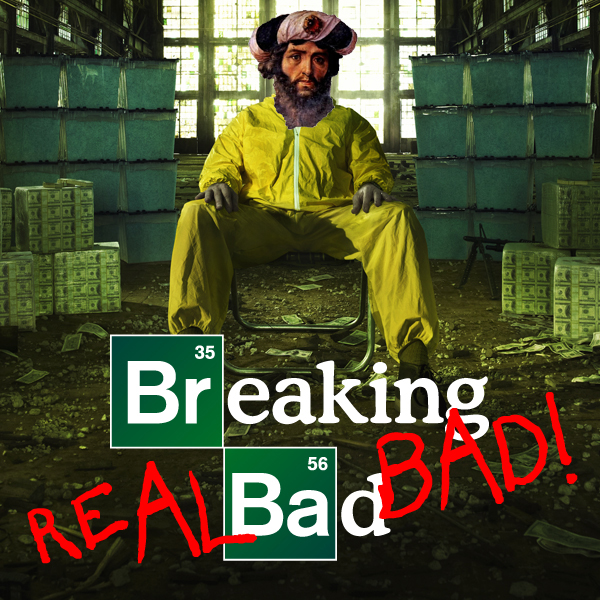 The A&E Series, “Breaking Bad,” could aptly be described as “Mr. Rogers becomes Scarface.” It is a morality tale about a milquetoast high school science teacher who is diagnosed with cancer. Out of concern for the finances of his family – the medical expenses associated with his cancer treatment, as well as their financial well-being after his passing – he decides he “must” step over the legal line just a little bit, just for a very short time, and use his chemical expertise to cook meth. His idea was to temporarily partner up with a none-too-bright kid who was already dabbling in selling drugs, make a quick killing, and get out before he could get caught. He figured it might take 10-12 weeks, tops. After all, people are using meth anyway, and horrible violent men are selling it to them at enormous profit. Why shouldn’t HE make some quick money, and set up his family to thrive when he was gone. It should be noted that Walter White saw himself as a victim of life’s vagaries. He was brilliant, but here he was slaving away, earning very little money and even less respect, while old friends of his were wildly successful and wealthy. Life wasn’t fair to Mr. White, and now he had cancer and was soon to die. What could be the harm in cooking a little meth for a very short time? But life isn’t that simple. Little lies and deceit often lead to more and bigger lies and deceit to cover up the previous ones. Cooking a little meth can lead, given a string of “bad” circumstances, to even worse acts, including murder. The transition from law abiding citizen, faithful husband, and reliable father to callous drug kingpin happened one painful and terrifying step at a time. Each new step was necessary to hide and cover up previous bad acts to maintain the illusion of being the morally upright law abiding citizen that everyone thinks him to be.

It would be tempting to think this is a very far-fetched scenario, but like all good literature or storytelling, it draws from clear-eyed observation of human behavior. We even see such scenarios in Scripture.

In 2 Samuel 11 we read about David, a man after God’s own heart. He was the king of Israel, and for reasons we don’t know he stayed home one spring when kings normally go “out to battle.” He spied a young woman bathing, and instead of looking the other way, he chose to observe a little longer. In hindsight, this was a bad decision. As temptation took hold of him, he decided to find out who the beautiful woman was. What’s the harm in that, after all?  He learned that she was married, the wife of one of his most loyal soldiers, Uriah the Hittite. But Uriah was not around, and David was by now in a fever with desire to have her. Yes, an affair with a married woman would violate the law a little bit, but he really wanted this woman. So, he had her brought to his home and had an affair with her. But now David’s little fling began breaking bad. Bathsheba turned up pregnant. Oh no! How could David protect his reputation?!  Obviously, it would be realized by everyone that her husband Uriah couldn’t be the father of the baby because, irony of ironies, as a loyal soldier, Uriah was off serving the king in battle! David realized that he would look very bad indeed if his evil deed was exposed. So, he sent for Uriah, and after meeting with him, gave him time to spend with his wife. Problem solved! Uriah’s spending time with his wife would make it look like the baby was Uriah’s, and cover up the bad acts of David. Problem solved! But alas, things broke bad again. Uriah’s good conscience would not allow him to spend time with his wife while his comrades were off at battle, and so he slept at the door of David’s house. What was the “good” king David going to do now? Well, David greatly compounded the evil, in an effort to escape the consequences of his sin. He sent the loyal Uriah back to the battle front with sealed orders to his superior, to make sure that Uriah would be killed in battle. It was David’s last desperate (and most despicable) act to cover up his previous lies, deceit and bad acts. And though it was a horrible thing to do, it came with a bonus. With Uriah essentially murdered in battle, and completely out of the way, the king could swoop in and “take care” of the grieving widow, Bathsheba. A win-win!  But of course David’s treacherous act was not the end of the story.

That is the way of sin. It starts out small and grows. James lays out the pattern in James 1:14-15:

But each person is tempted when he is lured and enticed by his own desire. Then desire when it has conceived gives birth to sin, and sin when it is fully grown brings forth death.

None of the fears or temptations we encounter are new or rare. The Apostle Paul writes in 1 Corinthians 10:13 that all of our temptations are “common to man.”  James shows the progression from temptation to evil outcome when we give in to the lures and enticements of sin. If we dwell on our temptations, they will affect the decisions we make. And if we succumb to them, things will “break bad.” As we thrash about seeking to cover up our sins, we will likely in the process make things much worse. We do not suffer humiliation and serious consequences from every single sin we commit, but the more a person feels that he or she “gets away with,” the more likely it is they will feel immune to consequences, and commit even worse acts. Eventually, however, the hammer will fall. It’s very important not to take God’s grace for granted and continue down the slippery slope to disaster. David was eventually exposed by Nathan the prophet, and he did pay grievously for his great transgression. But unlike Walter White, who came to rather enjoy being a powerful Drug kingpin, and came to a very bad end, dragging his family down with him in the process, David repented of his sin, accepted the consequences, and turned back to the Lord. That should be our pattern.

The Apostle Paul outlines how to focus our minds in a direction which will prevent us from making and acting on destructive choices.

In the process of focusing on honorable things, our focus changes from ourselves to God. It takes the emphasis from us and our ability to make ourselves happy, or safe or provided for – and places the emphasis on God Who is able to do all of those things and more.