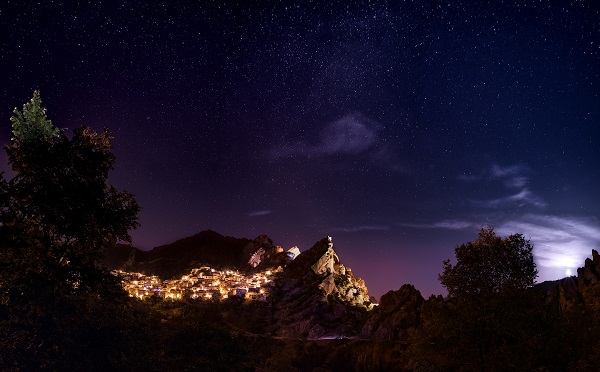 Photo by Paolo Santarsiero on Unsplash

As I write this, my children have been shoe’d up stairs for the umpteenth time. All the presents are wrapped and house is silent, at least for a few hours until one of my sleepy eye’d progeny asks what time is it somewhere around O-Dark-Thirty. Needless to say, the lyrics of Silent Night are a bit ironic these days as nothing is silent in my house.

Which I suppose is fitting since that first Christmas night whatever time of the year it was in Bethlehem was anything but silent. A  city full of disgruntled taxpayers squeezing into any place they could find watched at every corner by soldiers making sure Israel didn’t get any grand ideas about who was in charge.

I subscribe to the view that the holy couple did not have to plop down in an isolated barn because all the hotels were full. There was no cruel innkeeper. More likely, Mary and Joseph imposed upon relatives already full to capacity with disgruntled out of town guests forced to register for a census so their district could be taxed for Rome’s occupation. The word translated “Inn” as in no-room-in-the kataluma is translated elsewhere as “guest-room.” like where Jesus would later celebrate Passover on another holy night.

Wikipedia just told me that those lyrics from Silent Night are 200 years old this very night. A documentary on Amazon Prime shows me picture-postcard scenes of the snow-swept towns in Austria where the song was composed in 1818 by Joseph Mohr, a Catholic priest. The music was composed by an organist named Gruber.

My favorite Christmas carol, O Holy Night, was written by a French poet who reportedly had no great Christian piety. Both the lyricist and the composer were likely anti-clerical socialists. The English translation came from a Unitarian Universalist. By all rights, this pedigree should have produced some milquetoast, vague hymn to a generic god. But no.

Long lay the world in sin and error pining,
Till He appear’d and the soul felt its worth.
A thrill of hope, the weary world rejoices
For yonder breaks a new and glorious morn

What these beautiful hymns express is the idea that everything about the birth of Jesus is bathed in holiness, a night set apart from all others, as God’s kingdom finally breaks into our world. And whether it was a cave, a barn, or the animal pin inside an overcrowded Jewish home; the implication is the same. The world changed that night. There was a coronation of a new king of the world though Caesar Augustus and subsequent rulers would dispute that violently.

It was really a strange way to save the world. To conquer hearts instead of countries. To be a redeemer rather than a tyrant.

Truly He taught us to love one another;
His law is love and His gospel is peace.
Chains shall He break for the slave is our brother;
And in His name all oppression shall cease.

Such ideas were absolute foolishness to the gentiles as Paul reminds us. The word he uses in 1 Corinthians 1:23 has made its way into our language as “moronic.” It also can be translated “impious” because the Christians did not worship any of the traditional gods in the traditional way. So this little baby manages to subvert both the Roman powers and the gods of their imagination.

And the message that rings like a bell in the narrative is that Jesus comes for those who are willing to accept that God shatters our expectations when he shows up.

The King of Kings lay thus in lowly manger;
In all our trials born to be our friend.

Merry Christmas to all and to all a holy night.Ω