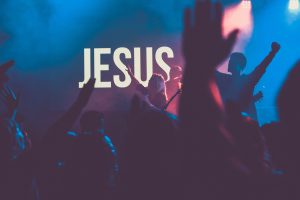 Photo by Edward Cisneros on Unsplash.

It’s been a long time since the word “evangelical” meant anything specific in common currency. Back in 1971, long before it became a focus of pollsters like Gallup,1Cf. “5 Things to Know About Evangelicals in America,” by Frank Newport, May 31, 2018, at https://news.gallup.com/opinion/polling-matters/235208/things-know-evangelicals-america.aspx. when it was a word used almost exclusively by conservative Protestants, D. Martyn Lloyd-Jones lamented how slippery the term had become even by then in his now-famous lecture, “What Is An Evangelical?”[2. https://www.amazon.com/What-Evangelical-David-Martyn-Lloyd-Jones/dp/0851516262.]

The religious historian George Marsden once quipped that in the 1950s and 1960s an evangelical Christian was “anyone who likes Billy Graham.” But when Billy Graham was asked to define the term in the late 1980s, he replied, “Actually, that’s a question I’d like to ask somebody too.” As it turned out, even America’s most famous evangelical preacher couldn’t describe what the term meant.2Jonathan Merritt, “Defining ‘Evangelical,'” The Atlantic, December 7, 2015. https://www.theatlantic.com/politics/archive/2015/12/evangelical-christian/418236/

I wrote about this subject just a few months ago.3Ron Henzel, “An Evangelical Walks into a Bar…” http://midwestoutreach.org/2018/05/17/an-evangelical-walks-into-a-bar/. At that time I briefly touched on the fact that, “For many, the word ‘evangelical’ has become so identified with conservative social causes that it is as much a political term as a religious one.” I’ve now come to the point where I’m willing to concede that, at least in terms of how the word is used in the media, and thus in our broader culture, it no longer has much religious significance at all. For a huge portion of our society, it only has meaning as a political term.

A Tale of Two Surveys

The word once denoted a specific minimum set of Christian beliefs, but by around a half-century ago, that was becoming increasingly less the case. Things have only gotten worse since Lloyd-Jones’ 1971 lecture—far worse. So, perhaps it’s time for the minority of us who call ourselves “evangelical” but take the Bible and theology seriously to jettison the term altogether.

How bad have things gotten? Well, if Ligonier’s State of Theology survey for 2018 4https://thestateoftheology.com/ is accurate, there is no longer any biblical consensus or theological coherence among those who call themselves “evangelicals.” And it seems that the final nail was driven into that coffin some time ago. Ligonier has released these surveys every other year beginning in 2014. The results of the 2018 survey are not much different from the one conducted four years ago.

So, it’s worth asking the question: ‘What percentage of self-identifying evangelicals are even Christians?’

One obvious follow-up question then is: “On what basis can anyone claim that ‘evangelical’ is a valid demographic category, and thus useful for compiling statistics?”

My answer to the first question is: ‘Probably horrifically low,’ and to the second question, ‘None whatsoever.’

If evangelicalism has no boundaries, then no boundaries have been transgressed, of course. But let us be more honest about the vacuous nature of evangelical theological identity. Is contemporary evangelicalism indeed impossible to define doctrinally? Is it merely a sociological category, loosely bounded by a wide range of institutions and organizations? In that case, evangelical theology becomes not an outgrowth of historic doctrinal concerns but rather whatever theology is currently taught at evangelical seminaries, editorialized in evangelical magazines, and published by evangelical presses—and let us not pretend otherwise.5Carl Trueman, The Real Scandal of the Evangelical Mind, Kindle locations 341-346.

I think we now need to go beyond these questions. How does the term “evangelical” cohere even as a mere sociological category? Are not people in the same sociological category supposed to have some rather significant things in common? But if those of us who use this term to describe ourselves can’t even agree on things basic to Christianity itself, are we not simply using a word that trivializes the whole concept of religious identity?

Meanwhile, as long as demographers and other sociologists remain too lazy to look more deeply into their data, it looks like we’re going to be stuck hearing about “What ‘evangelicals’ say about [X], [Y], and [Z]” for the foreseeable future.

All Generalizations Are False, Including This One. 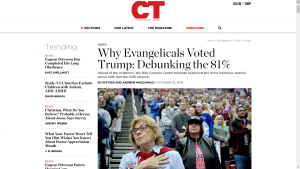 In keeping with this wretched state of affairs, just this month Christianity Today published the results of its own survey in an article by Ed Stetzer and Andrew MacDonald titled, “Why Evangelicals Voted Trump: Debunking the 81%.”6October 18, 2018. https://www.christianitytoday.com/ct/2018/october/why-evangelicals-trump-vote-81-percent-2016-election.html The subtitle calls this “the most infamous statistic about faith and the 2016 election,” which at first glance reads like a cheap shot at evangelical Trump voters.

So what, exactly, is wrong with this statistic and how do Stetzer and MacDonald propose to “debunk” it (i.e., expose something as false)?

It turns out that the authors do not intend to expose the 81% stat itself as false, as their headline seems to imply, nor is it clear how they would have the means to do that. Instead, they seek to debunk how it is being used, i.e., as evidence “that all evangelical Trump voters were ‘all in’ for everything that encompasses Trumpism.”

So they begin by noting that the stat fails to account for the motivations of these white evangelicals. The authors demonstrate that many of them did not so much vote for Donald Trump as they voted against Hillary Clinton. For these voters it was all about choosing the lesser of two evils.

And they put to rest the myth that the evangelical votes for Trump were all about abortion and the Supreme Court. In reality they were about a wide range of issues, including the economy, health care, immigration, national security, and even personal character. (Yes: evangelical voters didn’t buy the notion that Trump was the only candidate with moral issues.)

Perhaps the most significant turnaround from where evangelicals were a quarter of a century ago is that personal character is cited by far fewer of them as a reason for choosing a candidate: “Of those with an opinion, 3 out of 4 evangelicals by belief agree that a political leader’s personal life does not need to line up with Christian teaching in order for Christians to benefit.” Does this make evangelical voters more hypocritical or more pragmatic than they used to be? One’s answer to that question is determined perhaps by whether one is disappointed or satisfied with the outcome of the 2016 presidential election, and thus whether one either blames or credits those who had a hand in its outcome.

On the other hand, although the authors established that white evangelicals did not focus exclusively on abortion and the Supreme Court, nevertheless: “Three-quarters of evangelicals by belief who are pro-life (75%) expressed a willingness to vote for a candidate who was truly pro-life, regardless of political party.”

This raises some very interesting questions, such as: “If Bernie Sanders had run as a pro-life candidate during the 2016 election, how many more white evangelical votes might he have gotten?”

So, we have a term, “evangelical,” that has not only become theologically vacuous, but also seems politically unstable. After all, if three-fourths of white evangelicals are willing to change parties (at least in the polling booth) if the right pro-life Democrat comes along, what does that say about their political philosophies?

Has the Term “Evangelical” Outlived Its Uselessness?

In the meantime, not only do beliefs have consequences, but the lack of beliefs also has consequences. Particularly, the lack of an agreed-upon set of beliefs is ultimately disastrous for the long-term prospects of any religious group or category of groups. It makes a farce out of the very concept of religious unity, and in the long run it will also make a mockery out of the three elements that the National Association of Evangelicals and LifeWay Research use to describe evangelicals: “belonging, belief, and behavior.”7“NAE LifeWay Research Evangelical Beliefs Research Definition.” http://lifewayresearch.com/wp-content/uploads/2015/11/NAE-LifeWay-Research-Evangelical-Beliefs-Research-Definition-Methodology-and-Use.pdf. Behavior will inevitably follow belief, and the differences in beliefs among those who call themselves evangelicals are not always minor. Sometimes they touch the doctrines of God, Christ, the Trinity and salvation. This is the reason why what Carl Trueman predicted seven years ago has already come true:

The fissures in evangelical views on homosexuality at the beginning of this century have now widened into chasms. It is only reasonable to expect the chasm on homosexuality to expand into a canyon of differences on multiple moral issues in the future. How long before we see evangelicals endorsing polygamy, polyamory, and pedophilia?

Behavior follows belief, and when both fall into confusion, the idea of belonging loses all meaning. If we can’t agree on either doctrine or morals, how is it that we “belong” together?

The lack of beliefs has consequences, and one of those consequences is moral chaos. Hosea wrote, “My people are destroyed for lack of knowledge,” (Hosea 4:6a, ESV). But even that is not the worst consequence. The lack of knowledge that results in moral chaos is merely the symptom of a bigger problem, as Hosea explained: “There is…no knowledge of God in the land,” (Hosea 4:1b, ESV). The evangelicalism of our day is looking more and more like the land of Hosea’s day.Ω