The Dogma Lives Loudly Within You 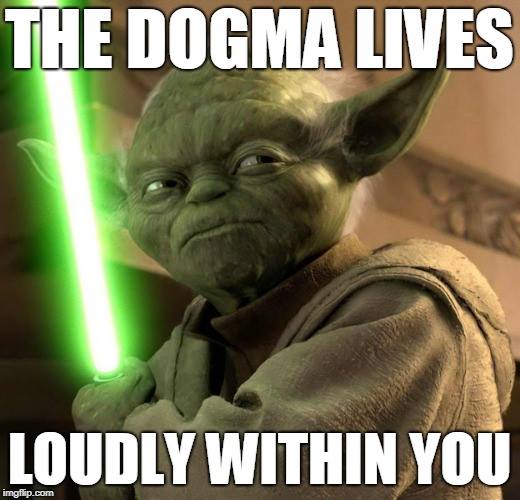 In the fall of 2017 Professor Amy Coney Barrett was confirmed to the United States Circuit Court. In the Senate confirmation hearings, Democratic Senator Dianne Feinstein offered a rather Star Wars-esque comment concerning Barrett’s faith, saying, “The dogma lives loudly within you.” Feinstein did not call the Notre Dame law professor’s qualifications into question, but rather the strength of her commitment to her Roman Catholic faith, which, it seemed to Feinstein, spills over into and
informs nearly all areas of Barrett’s life. Of course, Conservatives quickly jumped on Feinstein’s question as an attempt to impose a religious test, which would be unconstitutional. Others wondered whether the Senator would have dared pose a similar question if the nominee had been a faithful Muslim. This issue erupted again this week as Amy Barrett was being considered for nomination to the Supreme Court, a moot point now since the President nominated Brett Kavanaugh for that position.

But why would Senator Feinstein be concerned about Barrett’s faith anyway? A fuller context of Feinstein’s remarks may be helpful:

“Whatever a religion is, it has its own dogma. The law is totally different. And I think in your case, professor, when you read your speeches, the conclusion one draws is that the dogma lives loudly within you, and that’s of concern when you come to big issues that large numbers of people have fought for, for years in this country.”

What we witness in this exchange is a conflict of worldviews which “live loudly” within the respective adherents. We all understand why Senator Feinstein is concerned about the “dogma” (worldview) that Barrett might bring to the Circuit Court. We all recognize the power inherent in the higher courts. Feinstein naturally prefers to have the court filled with men and women whose progressive dogma “lives loudly” within them, rather than having someone like Barrett. Senator Feinstein is a committed Progressive; Professor Barrett is a committed conservative Roman Catholic. We can well imagine the nasty battle we are about to witness as Kavanaugh moves towards confirmation in the Senate. But this little blog is not really about the battle over the courts.

It is meant to highlight the charge that Senator Feinstein made against Barrett that her dogma “lives loudly” within her. From a Christian point of view, Feinstein’s statement could be regarded as a backhanded compliment to Barrett. Feinstein is saying that Amy Barrett’s faith is so evident in all that she does, it “lives loudly” enough within her to be quite notable. That accusation should be a badge of honor to Christians who take their faith seriously. Christians are not supposed to stuff their faith in their back pocket, pull it out on Sunday morning only, or “wear it” to church. Jesus specifically tells believers:

You are the light of the world. A town built on a hill cannot be hidden. Neither do people light a lamp and put it under a bowl. Instead they put it on its stand, and it gives light to everyone in the house. In the same way, let your light shine before others, that they may see your good deeds and glorify your Father in heaven. (Matthew 5:14-16 NIV)

Our pastor, Dan Cox, has been doing a series on Christian discipleship. He used the story of Barrett’s dogma “living loudly” to make a point in this week’s message on “Obedience.” Pastor Dan quoted something Barrett had said while speaking to a church audience:

No matter how exciting any career is, what is it really worth if you don’t make it part of a bigger life project to know, love and serve the God who made you?

Pastor Dan then made a slight revision to Senator Feinstein’s comment about dogma and asked the congregation, “Does the truth live loudly in you?” It is easy to get caught up in the ever-changing issues of the day and the various conflicts which arise in our nation. What is very important to note, however, is how we respond.  Do we allow these distractions to shape us, or does our walk with the Lord shape us?

Christian dogma informs us that in the end God has ultimate control of what happens here on Earth. We cannot rely upon the Supreme Court. For all we know tomorrow or next year the Supreme Court could be labeled a terrorist organization with calls for its abolishment. Does that seem farfetched? Maybe it is, maybe it isn’t. The point is we don’t know, do we? God is our only reliable refuge in this world.

We see a glimpse of this in Scripture. In Acts 4:13, Peter and John are in the spotlight of a first century hearing before the Israel’s religious rulers, a sort of “Senate hearing” if you will. The committee was very unhappy with the beliefs (dogma) of the apostles and their insistence upon teaching this dogma to the people. They demanded that the apostles “cease and desist” propagating their views, which were, of course, contrary to their own dogma. We could say they noticed that the dogma “lived very loudly” within the apostles. It astonished them, and likely it scared them a bit:

Now when they saw the boldness of Peter and John, and perceived that they were uneducated, common men, they were astonished. And they recognized that they had been with Jesus.

These uneducated, common men were certainly not ashamed of Jesus and were not afraid of standing up for what they knew was true. Today they’d probably be labeled “extremists.” When asked about the greatest commandment, Jesus answered without hesitation:

All our heart? All our soul? And all of our mind? That sounds pretty fanatical. The truth which permeates one’s being speaks loudly to an unbelieving and antagonistic world, but it also draws those people who desire to know God toward Him. They really need to see God in us through what we say, how we live, and how we love. We should never underestimate the power of a faith lived loudly and a life well lived.

Some years ago we had the opportunity to lead a family out of the Jehovah’s Witnesses and to true salvation in the Lord Jesus. The wife made some interesting observations once they were out. She said that there were several Christian women where she worked and, although the Watchtower clearly teaches that there are no Christians outside of the JW organization, these women had a simple, refreshing, genuine faith which attracted her. Without working to call attention to themselves, the truth lived loudly within these women of faith which was evident to those around them. They were recognized as having been with Jesus.Ω