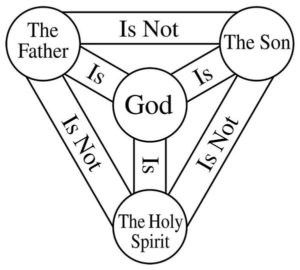 A main premise of the historic Christian faith is that there is only one true God. We are monotheists. However, within the nature of the one true God exists three co-equal, co-eternal persons who share the same essence or properties of being. The “Trinity Shield” is a good representation of this core belief. Obviously, since we are finite human beings, it is difficult to describe the infinite, eternal being of God. We can only use finite terminology and examples, which will often fall short. Some point out that the word trinity is not in the Bible. This is true but is a red herring intended to deceive. Though the word trinity is not found in the Bible, the concept certainly is! The Bible teaches there is one true God – all other so-called gods are false gods. Upon this foundation, Scripture goes on unapologetically to call the Father God, the Son God, and the Holy Spirit God. Jehovah’s Witnesses and others deny the doctrine of the Trinity. The overview “Faith Groups That Reject the Trinity Doctrine” is helpful.

One of the videos on our MCOI YouTube channel is “Explaining John 17:3 THOROUGHLY!” and as can be expected, this video brought an objection from an individual who is most likely a JW. The objection was in the form of a logic statement. If his premises, “P1” and “P2,” are true, his conclusion, “C” necessarily follows. He (or she) writes:

The author is correct – Trinitarians do not dispute the second premise (P2). We do not believe the Father is the Son, but rather they are separate persons who share the same nature – Godhood. It is also true that the three-word phrase, “only true God,” isn’t applied to Jesus, but the seeming dilemma it creates is a false dilemma used as a distraction to help his case. This phrase only occurs once, and that is in John 17:3. The lack of application explicitly to the Son seems to set up an either/or choice, but these are not the only possibilities. There are many other ways that Scripture demonstrates the Son is the One True God in the same way the Father is the One true God.

For example, The WTBTS makes a big deal about their use of the name “Jehovah,” which was created in about the 12th Century, and they use it over 6,000 times in their translation to replace the Hebrew tetragrammaton YHWH, pronounced “Yahweh. Although we do not regard the NWT as a reliable translation (Yikes!), it can actually be helpful in answering this objection precisely because of their insertion of the word Jehovah into the text.

Both Christians and Jehovah’s Witnesses can agree that the term “Lord of Hosts” in most translations, “Jehovah of Armies” in the ghastly New World Translation, only applies to the One true God. In verse 8 of Zachariah 2:7-13 “Jehovah of Armies” clearly states that He was sent, and in verse 9, He says Jehovah sent Him! Then, in verse 10, Jehovah declares He is coming (obviously because He was sent), and in verse 11, He states He will reside in the midst of the people – again reiterating that it was Jehovah who sent Him! So, here we have two distinct persons who are identified as Jehovah, One doing the sending and One being sent. Only Jehovah is the “One True God” by nature, and yet at least two persons bear that name in this passage. Can two persons be One Jehovah? Yes! It’s just so clear in the NWT precisely because of their insertion of the word Jehovah. Oops…

In Exodus 3, “the Angel of the Lord” identifies Himself as Jehovah. This makes perfect sense since angel simply means messenger and does not mean created being. In most cases, angels (messengers) are created beings, but obviously, an angel referred to as “Jehovah,” Whom we recognize as the only true God, could not be a created being! In the case of Exodus 3, the Angel of the Lord appeared as fire in a bush and spoke to Moses, describing Himself as the God of Abraham, Isaac, and Jacob. The Jehovah Who appears in the bush is the same Jehovah who was sent to Earth in Zachariah 2, Who is Jesus Christ Whom the Father sent according to John 17:3. (for a fuller discussion of these two passages, see our article, “Who Sent Jehovah?“)

In Romans 10:9-13, the apostle Paul applies Joel 2:32 to Jesus. In the Watchtower’s New World Translation, it reads thus:

Your Bible will likely say, “Everyone who calls on the name of the Lord will be saved.” But the NWT must translate the Greek word for Lord (kyrios) as Jehovah. They cannot suggest to people that they need to call upon Jesus for salvation, can they? However, their extreme Scripture twisting can be seen by looking at the whole passage in context. The exact same word for Lord (kyrios) is used in verses 9 and 12 as in 13, but the NWT only translated it as Jehovah in verse 13. Why? The WTBTS is trying to give the illusion that verses 9-12 are referring to one person and verse 13 to another! However, the entire passage is talking about calling on Jesus as Jehovah – as God Almighty! We can readily spot their deception by making a minor change in the “who” sections of the passage. We will substitute Mr. Smith for Jesus and Mr. Jones for Jehovah.

For if you publicly declare with your mouth that Jesus is Mr. Smith and exercise faith in your heart that God raised Mr. Smith up from the dead, you will be saved. For with the heart, one exercises faith for righteousness, but with the mouth, one makes public declaration for salvation. For the scripture says: “No one who rests his faith on Mr. Smith will be disappointed.”  For there is no distinction between Jew and Greek. There is the same Mr. Smith over all, who is rich toward all those calling on Mr. Smith. For everyone who calls on the name of Mr. Jones will be saved.