The Walking Dead (From door to door) 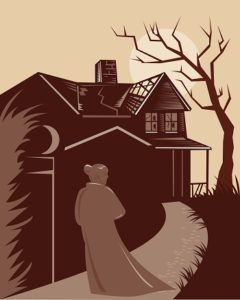 Jehovah’s Witnesses are quite proud of their record of faithfully taking their message from door to door. For example, on the back cover of the December 1, 1996, Watchtower magazine, Catholics and Protestants are bashed for neglecting evangelism, particularly of the door-knocking variety. The publication proudly boasts,

“Despite Christendom’s failure to evangelize, more than five million of Jehovah’s Witnesses are following Jesus’ command to ‘go and make disciples of people of all the nations’ (Matthew 28:19-20; compare Acts 5:42). Their door to door preaching is now carried out in more than 230 lands. The message they bring is a positive one, highlighting the Bibles wonderful promises for the future.”

Oftentimes when Jehovah’s Witnesses are backed into a corner Biblically or shown one of the numerous embarrassing past teachings of the Society, such as the teaching that aluminum cooking pots are a health hazard, they will retreat to this timeworn rationale: “Well, we are the only ones going door to door, so we are obviously the only true Christians.” Really? What about the postal workers, home alarm salesmen, or the Mormons? “Well,” the argument becomes, “no one goes door to door like we do, with our dedication, numbers, and the true gospel.” Okay – It is true that no one goes door to door exactly like the Jehovah’s Witnesses. Does that prove anything about their Christianity?

Neither rain, nor sleet, nor snow, nor dark of night, shall prevent the JWs from keeping their appointed rounds – and round, and round, and round they go – faithfully, fearfully, and futilely. Why do they do this? They work their neighborhoods, they traverse their towns, but when they are through, they must do it all over again tomorrow, and the next day, and the day after that. It is truly a journey without a destination, a hope against hope, a hair shirt worn on the feet.

What is behind their faithful pavement pounding? Jehovah’s Witnesses believe that Jesus himself instituted “field service.” One of the first things Jesus did, after taking in accurate knowledge of God, answering the eighty questions, and being baptized in the name of their supposedly spirit-led organization, was to get those presses rolling, running off Watchtower and Awake! publications. Then he sent the disciples out two by two, town by town, door to door, peddling magazines.

In Luke chapter ten, Jesus sent out 72 theocratic “ministers,” two by two, to every town. In verses three and four, He said to them, “Go! I am sending you out like sheep among wolves. Do not lake a purse or sandals, and do not greet anyone on the road.” (Which should mean, I guess, that JWs are not to wear open-toed shoes while selling their wares. I’ve never checked…) Verse five assures the faithful “publisher” (the individual JW) that if there is no man of peace in the house, the peace will return to the minister. So far, so good. However, no theocratically-minded “publisher” will voluntarily read verse seven (and, if forced to read, will NOT understand; trust me) where Jesus commands those he sent out NOT to go from house to house!

Now, you may notice that the Bible does not say whether these early JWs, supposedly sent out by Jesus, charged a set fee for their material or whether they employed the tried-and-true method of “donation manipulation” to fund the work. Did they fill out time cards? What were the required hours for publishers and pioneers?

These inconvenient “gaps” in the Biblical record are the reason why the theocratically minded need the organization to interpret the Scriptures for them and spell out the rules. What is a modern-day witness of Jehovah to do? Whatever the governing body says in its latest instruction, that’s what! As a Jehovah’s Witness, one must learn that “staying in the truth” is like hitting a moving target since the truth doesn’t just sit there like a bump on a log! NO, it keeps on a-changin.’

Do you remember the game “Simon Says” that we used to play as children? “Simon” was the boss, telling everyone else what to do. The Watchtower’s Governing Body in Brooklyn, New York, is “Simon.” Whatever Simon says is TRUE, and STAYS TRUE until Simon says differently. Present truth is whatever Simon currently proclaims, no matter what old “truths” it may contradict. There is no arguing with Simon. Even more confusing to those with independent minds is that Simon/Slave2The leadership of the Watchtower Bible and Tract Society is considered to be The faithful and discreet slave claims that all of his contradictory instructions come from God! “Simon” is merely the channel by which these often-opposing “truths” are delivered to the faithful followers.

But then again, according to the Watchtower, if the individual JW does see the problem, they are allowed to lie to prospective recruits if necessary. This is called “theocratic war strategy.”

One dear older lady who came to my door with a Watchtower Society book (chock full of lies!) asked me for a few dollars, which, she assured me, “would not even cover the cost of the printing.” Not wishing to disrespect this lady but needing to set the matter straight, I asked her, “Ma’am, do you have to lie for Jehovah? Would He want you to do that? You and I both know that a ‘few dollars’ would well cover the cost of the printing of this book, plus contribute its bit toward the Society’s real estate holdings in Brooklyn, New York, to boot. Isn’t that the truth?” The poor woman, who really did know, deep down in her heart, that the “theocratic war strategy” was really no different from the regular garden-variety lies her mama taught her NOT to tell, turned seven shades of red, and attempted to change the subject, but the point was made for time and eternity.

“Well,” she finally answered, “money is not the reason I go from door to door.” And yes, when all is said and done, I knew that money was not her motivation for dragging herself from door to door. FEAR! Fear was her motivation – the fear of a slave, the grip of a modern-day Simon Legree, the Watchtower Society. Bald, terrible, “blowing-up-buildings, everybody’s-dead, huge-earthquake, Armageddon-is-here, and you-just-might-not-be-good-enough-to-earn-God’s-favor” FEAR keeps her tramping from door to door but will never take her HOME. Home is safety, security, surety, and that’s not what the Society is offering its poor slaves. Jehovah MAY protect you; IF you go door to door faithfully; IF you do all we tell you to do; IF you don’t celebrate Christmas or your birthday; IF you refuse to listen to any criticism of the Watchtower Society; IF you shun any loved one that leaves the organization; IF you’d let your child die rather than take a blood transfusion, and on and on. It’s all very sad. That poor lady. I still pray for her when she comes to mind. Like now.

The truth is that no amount of preaching, walking, or doing will commute the sentence of a condemned man, a “dead man walking.” A pardon is what is needed.

Religious organizations and their onerous rules have no power to pardon and save from death. A dedicated dead man is still dead. There is nothing, nothing at all, about dedication that saves anyone. What is needed is a new “live” birth into God’s family, which is a free gift of God!

And this is the testimony: God has given us eternal life, and this life is in his Son.  Whoever has the Son has life; whoever does not have the Son of God does not have life. 1 John 5:11-12 (NIV)

Dedication may be nice, and door-to-door preaching may make you feel good about your zeal for God, but until you have life, you’re just the walking dead – from door to door.