You Have Died of Sneer Review

If you are of a certain age, you probably played a game in the computer lab at school called Oregon Trail. It was one of the first computer RPGs (role-playing games, you can play it here for free). You were a pioneer on the trail to Oregon. You managed your resources and hoped you didn’t die. The game was particularly brutal. There you were a 3rd grader, happy to not be doing math or English and then you kept dying in this game colored in depressing black and hideous green. You would be doing everything right. Being frugal with your food. Avoiding hazards and out of nowhere the screen would change to this image. 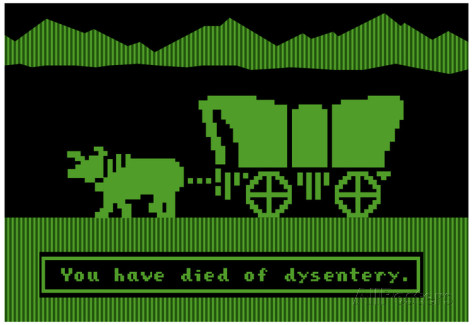 Cue depressing funeral dirge. Now you have to give up your seat at the computer to that other kid who still eats paste.

You were done. You didn’t even know what dysentery was. All you knew was you died of it and you didn’t know why. The only lesson seemed to be life was cruel for our pioneer ancestors.

Who would have thought academia would become as harsh as Oregon Trail? Let me explain and bear with me because this really is relevant to you, even if you are not an academic because as Lincoln said, “The philosophy in the schools in one generation will be the philosophy of the government in the next.”

Academic philosophy, my own academic discipline, has not had a good year. Ironically, the people who study ethics and morality the most, have been in the news for being unethical. Academic philosophers have been accused of sexual harassment including quid pro quo sexual favors with grad students. But something unprecedented happened this week. A professional academic journal bowed to pressure from other academics to withdraw an article that had passed its peer review process because, according to one detractor, the author engaged in violence towards transgendered folks. Among other things, the author made the mistake of using the word “transgendered.” And this author was no right wing firebrand who managed to sneak one by the gatekeepers. The author, Rebecca Tuvel from Rhodes College, has all her feminist and progressive bona fides. She supports transgenderism and did everything reasonable to signal her support. Her peers are not reasonable. And like dysentery, Tuvel is threatened by an misfortune she couldn’t have seen coming. Just to explain how unprecedented this is. Here’s philosopher and blogger Brian Leiter:

I confess I’ve never seen anything like this in academic philosophy. . .  A tenure-track assistant professor submits her article to a journal, it passes peer review, it is published, others take offense, and the Associate Editors of the journal declare that “Clearly, the article should not have been published” and that the abuse to which the author is being subjected is “both predictable and justifiable.”

It should be called sneer review instead of peer review. Here’s what one philosopher said of Tuvel’s paper that is particularly instructive:

Tuvel enacts violence and perpetuates harm in numerous ways throughout her essay. She deadnames a trans woman. She uses the term “transgenderism.” She talks about “biological sex” and uses phrases like “male genitalia.”

There is a lot in that sentence from a popular blog post by another feminist philosophy professor. First note, Tuvel’s article is described as “violence.” Her WORDS in an academic journal are violence. This is by far the most important point. Words even in obscure academic journals are violence. Why is this a problem. If words are violence then self-defense doesn’t have to be words. It can be physical violence. It’s important that there be a difference between sticks and stones and words or we can rightly use sticks and stones to answer “violent” words.

Second, we have a new term in the holy cannon.  “Deadnaming” is referring to a transgendered person by their previous birth name. In this case, Bruce Jenner. Some worry that mentioning a birthname could expose a transgendered person to violence if it were known that they were of another gender but as many point out, this isn’t a bar in Texas, this is an academic journal and Jenner is probably the most well-known trans person alive.

Fourth, notice that the solution is not write a scathing article criticizing Tuvel’s argument. No she must be banished. Her paper, consigned to the dust bin of history. It is unprecedented, as Leiter says.

So why does this academic Kerfuffle matter to you dear Christian?

For if they do these things when the wood is green, what will happen when it is dry?”

Jesus said this as he was heading to his crucifixion. The “they” is the powers that be. In this case, it was Rome. The point if established orthodoxy can engage in a sneer review of a ostensibly, left leaning, feminists who is writing in good faith, what will they do to counter-culture Christians when ideas are considered violence. You don’t have to wonder. Just look at what happened at Middlebury and Berkeley. I’ve made no secret that I think foundations are crumbling. Institutions of civility are cracking. Here is another crack. We would do well to ponder what it means to be wise as serpents and as gentle as doves (Mt. 10:16).