Civility is not Dead Yet 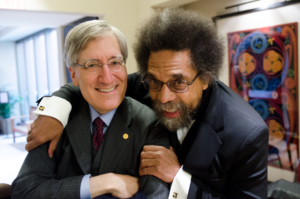 I’m in love with this picture. On the left but only in terms of the photo is Robert George, professor at Princeton University. On the right (and that’s the only way you will hear this phrase attached to him) is Cornel West is a professor at Harvard. The two men could not be more opposite in terms of politics. George is a Catholic Conservative who argued against same sex marriage and for Hobby Lobby’s right to deny contraception coverage. Cornel West is a Socialist-Democrat who champions gay rights and is a defender of Black Lives Matter. They are the odd couple of academia in many ways.

And yet they are frequently found together. George is usually stiffer in appearance but smiling and West is usually hugging his friend whom he calls “Brother.” It is the sort of civility you don’t find in this age of campus agitation, micro-aggressions, and ivy-league privilege to protest.

Recently the intellectual odd couple published a joint statement on freedom of thought and expression on college campuses. In the wake of the Middlebury violence at the planned lecture of Charles Murray, George and West sought to remind us of the values inherent in the liberal arts tradition:

The pursuit of knowledge and the maintenance of a free and democratic society require the cultivation and practice of the virtues of intellectual humility, openness of mind, and, above all, love of truth. These virtues will manifest themselves and be strengthened by one’s willingness to listen attentively and respectfully to intelligent people who challenge one’s beliefs and who represent causes one disagrees with and points of view one does not share.

What happened at Middlebury was the opposite of virtue. Students and faculty who admitted they had not read Charles Murray’s book The Bell Curve but heard that it was racist were determined to exercise their will to power and stop Murray from speaking. The result wasn’t just a heckler’s veto. The result was violence.  After Murray was forced to deliver his lecture from an undisclosed location via close circuit video, Murray and a female professor who interviewed him were assaulted. The professor suffered a concussion. The investigation is on going but as of this writing no one has been held accountable. This is all too common on college campuses as this documentary shows.

As one student says after shouting down a speaker who was not able to deliver their lecture, “They wouldn’t cancel the talk. So we did it for them.”

You can hear the concern for such naked displays of power in the joint statement:

It is all-too-common these days for people to try to immunize from criticism opinions that happen to be dominant in their particular communities. Sometimes this is done by questioning the motives and thus stigmatizing those who dissent from prevailing opinions; or by disrupting their presentations; or by demanding that they be excluded from campus or, if they have already been invited, disinvited.

G.K. Chesterton was fond of saying that the trouble with a quarrel was that it ruined a good argument. West and George agree:

Our willingness to listen to and respectfully engage those with whom we disagree (especially about matters of profound importance) contributes vitally to the maintenance of a milieu in which people feel free to speak their minds, consider unpopular positions, and explore lines of argument that may undercut established ways of thinking. Such an ethos protects us against dogmatism and groupthink, both of which are toxic to the health of academic communities and to the functioning of democracies.

As a Christian and a professor I have never felt the urgency to encourage and instruct people in the virtues of civil disagreement more so than now. I may be guilty of exaggerating the threat but there seems to be a new tone to the culture conflict. As Inside Higher Ed notes, Middlebury was not left wing stronghold and Charles Murray was no Milo Yiannopoulos. He is a sober academic and careful researcher. But none of that matters to the new campus power–the students. He is on the wrong side and he is guilty by default.

My God grant us the virtues of courage and civility.Ω