“Jesus never said ANYTHING about felony home invasion!” and Other Nonsense 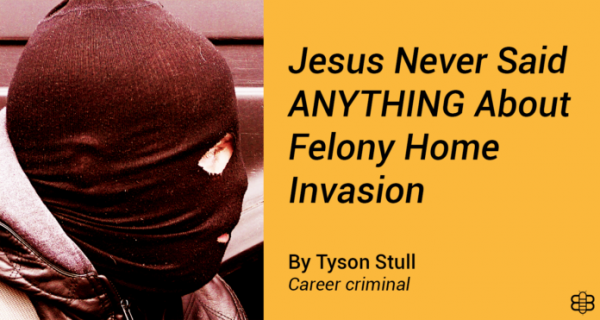 Those who have read our blog and/or Journal, or watched our YouTube Channel, know that we like satire. Satire done well is refreshing because it pokes fun at the absurd. The Babylon Bee is an online source of regularly produced satirical news stories with titles like, “Woman Credits ‘Daniel Plan’ With Helping Her Shed 15 Years Of Reading Bible In Context”, “Report: Baptists’ Impressive Life Expectancy Linked To Casserole Consumption”, “Man Feeds The Hungry At All Times, Uses Food If Necessary” and many more. As I was thinking about this week’s blog, the “Bees” latest offering, “Jesus never said ANYTHING about felony home invasion!” appeared on my Facebook page. “Perfect,” thought I. The absurdity in their crosshairs this time is the very popular idea that if something isn’t explicitly stated in Scripture or explicitly stated it in a particular way, then the Bible doesn’t support that particular claim or doctrinal position.

There are two articles which fall in this category which perked our interest this week. The first is by Skip Moen, a fairly prolific author and blogger who is a professor and Dean at Master’s International University of Divinity. The institution where he teaches has a fairly sound Statement of Faith, which he seems to reject in at least the portion concerning the essential doctrine of the Trinity:

In “The Trinity: Who decides?” he writes:

When we examine a doctrine like the Trinity, a doctrine that has no explicit Scriptural support, we must be sure we are dealing with the original text, not a translation.

He is ambiguous at best and seems to dance around the issue as follows:

Surely you can see why from just this example. By the way, when I say that the doctrine of the Trinity has no explicit Scriptural support, I do not mean that various verses and terms cannot be marshaled to infer support for the doctrine. I mean that there isn’t a single verse that says, “And God is three in one,” or something like that. There is no verse that uses the term “Trinity.” The doctrine is a conclusion made by men about problems presented by the implications of several different passages.

Even so, Skip generously maintains that even if the doctrine is not in the Bible but believing the doctrine makes you feel better, that’s okay:

This does not mean that you cannot embrace it. Please, if the doctrine of the Trinity helps you draw closer to God, worship Him with greater passion and enjoy His presence, go ahead and believe it.

He includes a summary of what he believes, most of which could be affirmed by JWs and other anti-Trinitarians, in which he refers to himself in the third person:

What does Skip believe? Everyone wants to know.

Skip believes that the so-called Trinitarian texts are ambiguous. Skip believes that the concept of the Trinity is derived from Hellenism and ideas found in Greek philosophy. Skip believes that no Jew in the first century, including those who wrote the New Testament, would have ever embraced a Trinitarian conclusion. But Skip believes that these authors (and Skip) think of the Messiah as “divine” within the semantic range of the word used in Scripture. Skip believes that Yeshua is the Jewish Messiah, that He is the Son of God and the Son of Man, that He is the chosen emissary of the Father, that He is the active agent and active agency of YHVH in creation, restoration and redemption. Skip knows that the dogma of the Trinity is an essential element of being a Christian and that those who desire to be called “Christian” will ipso facto be Trinitarians. And Skip finds that most of these people desire to worship the one true God and His Son, seek righteousness and wish to know the truth. Skip thinks of this entire effort as a journey which has not yet concluded. Skip thinks that what is most important is to know what the author meant when the text was written and that means there is a lot more work to do.

The second article which caught our attention is “10 Things This Christian Doesn’t Believe About the Bible” by pastor and LGBTQ activist, John Pavlovitz. The fact that he is an LGBTQ activist probably explains why he holds the views he does, and as we get into the “10 Things …” it isn’t long until we get to the heart of the issue:

4) I don’t believe the Bible has much of consequence to say about gender identity and sexual orientation. I don’t advocate consulting the Scriptures for an accurate understanding of matters of sexuality…

And a bit further down:

6) I don’t believe the Bible is without error.

The Bible may be inspiring but is not inspired. It has little to say on human sexuality that is “of consequence,” a position which is along the lines of “Jesus never said…” claims, but goes a bit further. In this scenario, it doesn’t even matter if Jesus explicitly said anything, because the Bible is merely an inspirational book, not a communication from God to human beings about Himself, our relation to Him or our sinfulness and need of salvation.

This line of attack on the Bible is not really new – it has been used by “Christian” liberals for quite a while. But it is becoming far more widespread, reaching a new (and perhaps younger) audience looking to bring their faith into line with their contemporary ideas of morality. The antiquated (and culturally offensive!) ideas of the past must be rejected or re-imagined. In this climate, the Bible can’t be used as a proof text anymore, since it cannot be ascertained whether any particular passage is actually true or not. There are alleged errors in the text, and the individual is the final arbiter of what it means to them. The Bible is thus degraded – it “teaches” whatever you happen to like, and held up as important but not explicit. It is inspiring but not inspired. You are free to hold on to antiquated ideas, (for now at least!) but you shouldn’t insist they came from God. It may well be that 2 Timothy 4:3-4 was penned for a time such as this:

For the time is coming when people will not endure sound teaching, but having itching ears they will accumulate for themselves teachers to suit their own passions, and will turn away from listening to the truth and wander off into myths.Ω