Speaking at a women’s conference in 2015, Hillary Clinton asserted that “…deep-seated cultural codes, religious beliefs, and structural biases have to be changed…” The fact that she would dare to challenge American’s cherished religious freedom was both profound and shocking to many. Religious views have to be changed? What? What right does the Federal Government or any politician have to dictate moral views and religious teachings? More recently, she made clear that human rights are not, as the Constitution declares, “unalienable Rights” which were given to us by “the Creator,” when she stated, “…the unborn person, uh, doesn’t have constitutional rights…”. Her arrogant declaration of which persons have human rights and which persons do not contradicts the foundational American belief that all men are created equal, and all possess unalienable (cannot be taken away or denied) rights. The Declaration of Independence states:

We hold these truths to be self-evident, that all men are created equal, that they are endowed by their Creator with certain unalienable Rights, that among these are Life, Liberty and the pursuit of Happiness.

Not only do our guaranteed rights come from God, but the founders saw the very purpose of government was to protect the rights of its citizens, saying:

That to secure these rights, Governments are instituted among Men.

Over the past century, a battle has been waged in the U.S. between the Federal government and the church, or perhaps better understood as a battle of the government against the church. Ultimately the battle was against the individual as well, since the individual in America made his or her own decision as to which church, or no church, that he or she would allow to influence his or her behavior and thinking. The battle is about control. Who controls the people? Who controls religious expression? Who sets the moral compass? On the “progressive” side there has been a steady push to expand government control in each of these areas, over the rights of the individual and the church, even as the government itself trended further left and further into godlessness. In other words, the Federal government has been engaged in aggressively pushing the populace further left, and as far away as possible from its foundational religious moorings. In order to effectively accomplish this, the people had to be encouraged to see the government as their “god.” A new god means new rules, new morals. America’s “old God,” the God of the Bible, with all his old fashioned morality, had to go. The Ten Commandments had to be removed from courthouses across the land, the school curricula from the earliest grades had to be scrubbed of God and His ways, and the old God’s morality must be relentlessly challenged and defeated, using the court system where necessary, in order to override the more conservative will of the people.

Del Tackett, in his excellent video series, “The Truth Project,” devotes one session to the “sphere of government.” Romans 13 talks about government as well as other places in Scripture. One of the problems which comes into play is when government tries to expand its sphere (jurisdictional power) and take over or replace God’s sphere. Ancient Israel, unlike America, was founded as a theocracy. A theocracy is a nation who is governed by God Himself. As such, God was their king. In 1 Samuel 8, Israel demanded a human king, so they could be like all the other nations. God told Samuel that the people were not rejecting Samuel but were rejecting God. Nevertheless, He told Samuel that He would give them a king and explained the areas which would be impacted by their decision:

Does any of that sound familiar? Of course all government needs financial support from the people to do its necessary work. And it has necessary work. God has ordained human government to protect the innocent and to punish evildoers. But, the more that government expands beyond its rightful bounds, the bigger it will become and the more of your personal wealth will be required to feed its growing habits. The bigger it grows, the more powerful it becomes and the greater greed it has for even more power. The government’s “servants” will get the best of your goods – they will live better than you do – on your dime. And you will be their “slaves,” in essence, giving them whatever they demand and doing whatever they say, or else. An out of control expansionist government is like the Blob of 1950s science fiction fame, swallowing everything in its path, leaving a greasy trail in its wake – a greasy trail and a whole lot of debt! That thundering burp you hear may be all that is left of your inheritance.

If that isn’t bad enough, an out of control government will insert itself into religious areas that are none of its legitimate concern at all.

It wasn’t long before King Saul expanded his governing sphere into the religious realm. He claimed he had to “force” himself to take Samuel’s place (the religious domain) and offer the burnt offering. (1 Samuel 13:8-12). This was a bit of theatre for the people to give the pretense of serving God while taking control of the moral compass. Saul also became very jealous of any honor offered to anyone other than himself, such as the high honor rightly accorded by the people to the warrior David. Similarly, government is a jealous god.

And, when the government steps out of its rightful role, it seems to perform much like the Keystone Kops, falling all over itself to fix the very problems it created, and always seeming to make things worse! I’m from the government, and I’m here to help…uh huh. 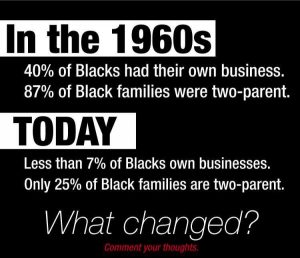 What changed was the moral compass. The meme presents the effects that the government’s “help” had on one segment of our society, but this is not a black issue. It is a human issue. Gargantuan government is making beggars of us all. Government cannot “fix” things, because government comes at problems from a fallen human (materialistic) perspective. Free money just isn’t the answer to everything. In fact, it’s not the answer to much of anything, but it is government’s favorite tool. They can use it for bribery, they can punish states and businesses by withholding it, or they can use it to wallpaper their congressional bathrooms – but it never gets at the heart of the problem. God, the real God, is central to informing us who we are and how we should behave. Marriage was a union between a male and female who together produced, cared for, and raised children. There was a personal moral responsibility to these relationships. Two parent families with a male and female role model were the norm. Taking personal responsibility for the family and individual economic circumstance was the morally responsible way to live and was often rewarded. Being peer accountable to the community was thought of as normal. Even if an individual or family were poor, they had a sense of pride and personal respect. Taking a “handout” was not taken lightly. The one helping had a sense of doing good, the one receiving was appreciative, and when their financial picture changed (for most poverty is a temporary condition) they would help others as they remembered how someone had cared for them.

In the 1960s, the “war on poverty” was declared, which often made government the “daddy,” and removed personal responsibility. It changed the structure of the family and created dependence on the Federal Government rather than on God. Women were financially rewarded for having children out of wedlock, and more children meant more government benefits. In certain communities it became the norm for children to grow up in single parent homes without a father. The children in turn became dependents to the State. So too, the so-called nanny-state also relieved grown children of the responsibility to provide for parents or other family members, and it also encroached upon the churches’ mission of meeting the needs of the poor.

In the 1970s, human life was devalued, abortion was normalized and the Federal government reset the moral compass regarding the preservation of innocent human life. It isn’t that the Federal government eliminated morals altogether, they replaced them with their own ideals of moral good. Dismembering innocent children in the womb is no longer immoral because it allows the government to graciously bestow a new and greater moral right – that of a woman “having the right to choose” whether to remain pregnant or eliminate her baby, now a mere “product of conception.”

By the end of the 20th century, sexual morality was fundamentally changed and continues the slide – to not only affirming but celebrating sexual behavior which God has decreed is wrong. The Federal government is now heavily pressuring churches and Christians, in 2016, to change their theology and teaching to accommodate the government’s new moral guidelines. The fear of God is completely gone from the halls of government.

As Christians, it is hard to watch what is going on, which seems beyond our control. We need to focus on what the true battle is and where it is being waged The Apostle Paul spoke to this: