Hey… Where Did The Devil Go? 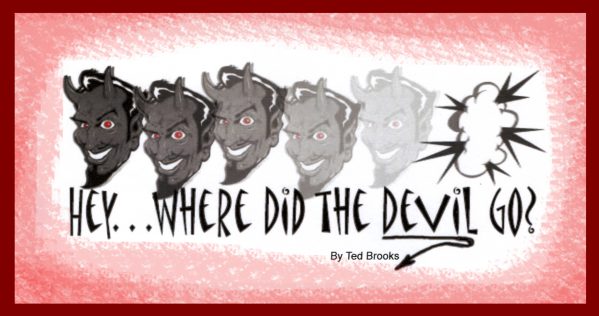 After years of screaming at the Devil, standing in faith, and seeking deliverance through God’s anointed leaders, when I stopped fighting, I finally found some peace. Since I have ceased my daily hyper-prayer routine and picked up my Bible, I have found what I was missing all along.

When I abandoned my efforts to defeat the Devil through spiritual warfare, the battle was over. I was expecting hordes of demons to break through upon my family, my property, and my mind, but nothing happened. Finally, I realized that all of my efforts to attain victory were driven by nothing more than cult-like teaching and religious peer pressure.

It seemed strange to me, but when I stopped such praying, the Devil halted his attacks. His fiery darts fell from the sky. His accusations ceased, and his lies no longer tormented me. What happened? Why did freedom come so easily?

I made a seemingly half-witted decision to cease spiritual warfare with the Devil, and I used the time to search for some answers in the Bible. I had some nagging questions about what in the world my peers and I were trying to do. An incredible motivation kicked into gear, and I truly wanted to understand who God was, who the Devil was, and where human beings fit into the scheme of things. It all was right there in the written words of Scripture. At long last, there were some answers.

At first, I didn’t notice my lack of engagement in spiritual warfare. My studies distracted me from the battle. I was too busy to notice the subtle changes in my thinking. My biblical findings were interesting, to say the least. The Bible was full of answers. This was exactly what I was looking for. Though my mind was busy taking in the wisdom of the Word, it was peaceful. Where was the Devil?

In our hyper-charismatic culture, we had been trained to believe that if we gave the Devil an inch, he would take a mile. If we stopped praying for our family, his fiery darts would make it through. If we ceased praying for protection, it was like leaving the door open for his ugly destructive demons to waltz into our lives. If we forgot to plead the blood over our belongings, even for one day, something would break down or end up missing. If we did not remain vigilant, we were inviting disaster.

But when I took a prolonged break from the battle to study the Word, I felt that the knowledge I would gain somehow would compensate for the lack of vigilance. During that time, I was desperate for answers and didn’t care what happened to my church or my family. It had become too much for me to carry by myself. If the Devil broke through upon us, then fine. That was the price I was willing to pay to get a much needed break and some quality time in the Word. I desired answers more than I wanted to win the war.

But nothing happened! The Devil and his messengers did not show up. Spiritual warfare ceased, and my mind was no longer tormented by all the possible strategies of the enemy.

Where did the Devil go? Even after months of Bible study and research, I was still neglecting spiritual warfare and aggressive prayer. Still no attack. . . no mental torment. . . no prophetic urges … and no rustling of the enemy. He had always seemed so close, so relentless, always whispering in my ear urging me to give up. But now, when I ceased paying attention to him, he was gone.

Ten years after leaving all of that behind, I am still curious about 25 years wasted on spiritual warfare. All of that aggressive activity did nothing for me. . . except give me an excellent reputation as an energetic warrior among my peers.

In contrast, the knowledge I gained from my Bible studies had done more for me than the sum of all the hours of wrestling in warfare prayer. As a pastor, I had always desired to see results in my flock. During those years involved in spiritual warfare, my flock depended on me as an experienced warrior; and I loved it. They always came to me for prayer and counseling. The altars were full after every service. We had lots of people to pray for.

Having said that, there was always something that bothered me: These people never matured. I would have to deal with the same problems over and over again. The phone was always ringing because my “pastoral” ministry was needed more than my “teaching” ministry.

In fact, when I began to teach more and pray less, some people in our church suddenly developed a new opinion of their pastor. They were unexpectedly offended at the new approach. “He is a good teacher,” they said, “but he is no longer a good pastor.”

This idea is based on a false cultural assumption that teachers and pastors are very different. Teachers teach doctrine, but pastors care for the flock. Teachers are viewed as dry, unentertaining, but painfully necessary. Therefore, pastors, apostles, prophets, and evangelists are more appreciated. Teachers are at the bottom of the power structure in our culture.

The hyper-charismatic culture (of which we were a part) does not teach that pastors are commanded to care for and feed the flock via sound teaching. However, I discovered that the Bible does. Teaching is the best way to feed and care for the church. I put this information to work and started to see excellent results.

On the other hand, some of the offended people quickly left our church and did not stay around long enough to see the benefits of long-term spiritual growth. Maturity was now evident in the remaining members of our church.

Slowly, I changed my focus from prayer and counseling to Bible study and teaching. I showed my flock how to study the Bible and instructed them in biblical discernment. We discovered the spiritual pattern of Scripture and developed a godly perspective. Our soulish preferences gave way to biblical discernment.

As I matured, my sermons were transformed from loud, long, inspirational preaching marathons to concise expository biblical presentations. I simply shared what I was learning in Scripture.

We slowly decreased our need for long altar calls after each service. After a while, I noticed that members of the congregation were also maturing. They no longer needed me as their anointed spiritual father-figure. Stability replaced their ups and downs. They handled life better, and life was better to them. Promotions, opportunities, and new responsibilities came easily to these stable trustworthy people. I was proud of them. They were finally showing all the signs of Christian maturity that this pastor longed for.

“Put your Bibles away,” we were scolded, “and listen to what God is saying to the church today.” We were trained to “hear” the voice of God while our Bibles collected dust. It was better that way. The Bible simply got in the way. It was common knowledge among us that people who studied the Bible were unable to partake in the benefits of renewal and could not receive the new spiritual manifestations that were appearing in many churches. People who inquired “Is that in the Bible?” hindered revival.

This became very evident when several members of our church decided to travel with me to check out a new “prophet” from Texas who was holding revival meetings in Edmonton, Alberta. We had long left this type of stuff behind, but we remained curious about the emerging trends and the “cutting-edge” preachers who were rising on the scene.

I desired to keep my fingers on the pulse of the Church. Therefore, when I decided to attend these meetings, several members of our church said that they wanted to come along. They also wanted to glimpse briefly into their former culture.

The preacher was entertaining to say the least. He preached with fire and conviction—pacing across the stage and then down the isles among the chairs where hundreds of people were ready to hear what God had to say. Suddenly, he noticed our group sitting together in a couple of rows. He seemed to shift abruptly into “spiritual warfare” mode. Without pointing his finger, he began to preach about people who were resisting “the move” of the Spirit—people with Bibles and notebooks who could not understand the next move of God destined to come upon the earth.

I looked at my Bible and my notebook in my lap. Then I looked down the row at our group and noticed every one of them had Bibles and notebooks. As I surveyed the room, there were hundreds of people in the meeting with only a few Bibles placed on the floor, under the chairs. Oops! We were the stubborn hindrance to which he was referring. We had no idea that because we had carried our Bibles and notebooks into the meeting we were in danger of offending the Holy Spirit and holding back the “revival” these people were seeking.

Since then, I have come to realize this idea is very common among preachers who are trying to lead people into new revival trends. In the name of “renewal,” there is a new resistance leveled against the Word of God. It no longer represents sound spiritual maturity. It has become a prevailing symbol of stubborn rebellion against the emergent “move” of God. The Bible is now viewed as the old word. The new word has arrived in the form of prophecies, visions, and dreams. They have either replaced the Bible or are considered a more progressive revelation than the written Word.

The consistent study of Scripture has taught me that bypassing the written will of God to find the unwritten will of God is a very dangerous idea. People have fallen into this trap throughout the ages. In fact, we can go all the way back to Adam and Eve. Like them, we have forsaken the words of God for a better-looking revelation.

Where is the Devil? He is still doing what he did in the garden. He is still asking, “… has God said …? (Genesis 3:1)” Is the Word of God sufficient? Is it adequate for twenty-first century believers?

Want to deal with the Devil? The Devil vanished from my own life when I returned to the powerful words of the Book of Life. When I opened my Bible, the battle ceased.Ω

Ted Brooks is the author of I Was a Flakey Preacher (Guardian Books). He is a former Word of Faith preacher who was heavily involved in the extreme practices and teachings of the ‘hyper-charismatic movement’ for many years. A careful search of the Bible led him to abandon the movement. Now he shares his journey in apologetics conferences and biblical discernment seminars. He provides key insights into Word of Faith doctrines and practices. Ted brings discernment that provides the ability to distinguish the work of the Holy Spirit from the false teachings and practices of hyper-charismania. In addition to being the pastor of Victory Life Church in Westlock, Alberta, Canada, he is also the host of Bible Detective Radio Broadcasts and is a frequent guest on TV and radio talk shows as an expert on Charismatic/Word of faith doctrines and extremes.