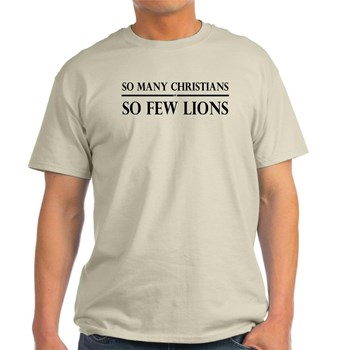 In a previous blog post, I wrote about sociologists finally recognizing that evangelicalism is viable ideology to study seriously. Well now two sociologists are studying another aspect of life that most evangelicals have experienced at one time or another. I’m talking about the prejudice that dare not speak its name lest we get shinned kicked by the knee-jerk reactions. Some people have a genuine, palpable, and uniformed opinion of Christians and this leads them to discriminate against them in ways they don’t even acknowledge.

We can call this “Christophobia” because the sociologists do even though the term comes with the usual caveats that fear may not always be the primary sentiment involved.

George Yancey and David Williamson have written a book about Christophobia called So many Christians, So Few Lions. Yancey recently wrote about his research in Christianity Today. It turns out that Atheists were actually more despised than Christians but with an important difference.

The only group to fare worse was atheists, who received low rankings from nearly half the respondents. But while atheists drew more global hostility than any other group, the negative rankings for conservative Christians came from a disproportionate number of white, highly educated, politically progressive, and wealthy respondents.

Christians have reason to worry because even though the anti-Christian hostility is far less than perceived, it is concentrated in the most powerful people in society: Rich, white, educators and business leaders. Among those surveyed anonymously the sentiments were quite hateful including:

“Churches should be nuclear test zones.”

Do I think these people really mean Christians should be killed? No. I think these people are emoting–blowing off steam– and so do the authors. However, consider the implications if the same things were said about traditionally marginalized groups. Could you imagine someone, even under anonymity, saying things like “The only good Jew is a dead Jew” or “So many Jews, so few ovens?”

What is clear is that there is a palpable hostility. Within this small but powerful self-identified progressive group, there is a conviction that Christians represent the American equivalent of the Taliban.

“Their agenda seems to include making America a theocracy, which frightens me, as it would take us back to the Dark Ages politically, culturally, educationally, and morally.”

One of those wealthy, white progressives is Aaron Sorkin who writes witty, entertaining dramas like Newsroom about a cable news show. Sorkin exhibits this same worry in an episode on the Tea Party:

What is also clear is that Christians are conceived as either ignorant fools or hucksters. I’ve mentioned this before. Christians are either Ned Flanders or Reverend Lovejoy from the Simpsons. Ned Flanders is a well meaning boob who blindly follows his religion. Reverend Lovejoy is a greedy, conniving hypocrite. Here are some popular memes illustrating these two Christian stereotypes. 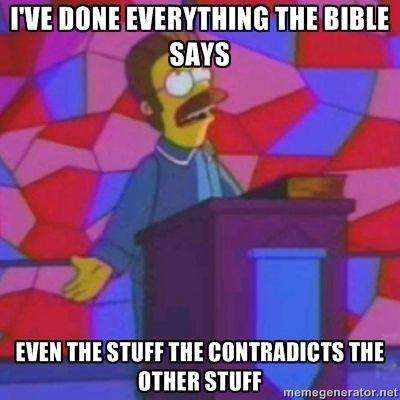 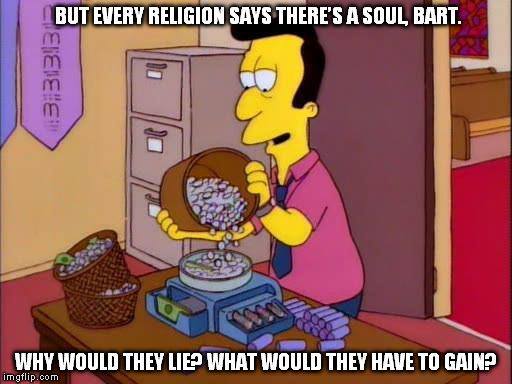 The respondents in the research, however, would be able to tolerate Christians if they would just keep their faith to themselves.

“Keep all religion in your church, in your home, out of the public square, and most of all, out of my face.”

“Christian Right people can do what they want in their churches and homes, but not in the public arena.”

“Disparate Impact”is a term borrowed form literature about affirmative action. Ostensibly a law or practice may not target a particular group but it may adversely affect them just the same. This is contrasted with “Disparate Treatment” which means directly discriminating against some group of people. Anti-discrimination law in America makes work policies that adversely impact a particular group illegal even if it wasn’t intended. Those suing for disparate impact don’t have to prove the policy or rule was intended to discriminate–only that it had the adverse affect.

What’s interesting is that among the Christophobics, disparate treatment is still an offense to their liberal sensibilities, thank God, but disparate impact is not.

One respondent stated, “I don’t think we should pass laws that are directed toward any particular group of people. However, if a particular good law happens to negatively affect practices or beliefs of the Christian Right, but protects the freedom of most Americans, then I would be in favor.”

Yancey, one of the authors of the study, put it this way:

If these laws are couched in terms of religious neutrality—like the “all comers” policies for student organizations—then those with Christianophobia can endorse them without worry about being stigmatized as bigoted. (There is a similar phenomenon noted in race/ethnicity scholarship. Public policy measures that seem racially neutral can work to the disadvantage of people of color. Restrictive immigration policies are theoretically racially neutral but disproportionally affect Hispanic Americans.)

This acceptance of disparate impact policies explains widespread support for laws that are religiously neutral but still adversely impact Christians because they restrict how Christians can interact with society as a whole. The contraception mandate in the Affordable Care Act is religiously neutral but it adversely impacts Christian organizations like Hobby Lobby. So do laws about religious accommodation for everything from wedding cakes to who you can rent your house to on Airbnb.

If this is an accurate portrayal of Christophobia then in the years to come we can expect two general  sort of trends. First, we can expect a growing call for the privatizing of religion. Of the people in the survey who were religious, most considered religion someone private. So why should they tolerate Christians who don’t?  I don’t expect anti-proselytizing laws any time soon. The first amendment is still too much a part of our culture, but I don’t remove it from the realm of possibility. But I do expect the public square where we can engage in any sort of evangelism to shrink dramatically.

Second, we can expect laws and regulations that adversely affect Christians without directly targeting them. Consequently, we can expect that cries of religious persecution will fall on deaf ears. How can we be persecuted if we are not directly targeted? At any point where Christians engage the culture; be it business, education, or entertainment, Christophobics will be tolerant of disparate impact that are religiously neutral (that is don’t target any particular religion) but adversely affect evangelical or conservative Christians. I expect calls for regulating homeschooling curriculum, rental policies, and any public use of Church property.