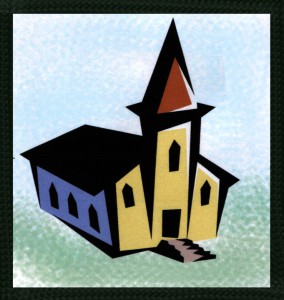 When I was young, there was a time the Russians occupied Cuba and threatened the United States. I learned of this in school, and asked my mother what to do if a bomb went off while she was at work and I was at school. She was a single mother, I was an only child. We lived in Farmington, New Mexico, and there is a town named Cuba about 90 miles away. I thought the Russians were very close. She wasn’t so concerned, and I was sure it was because she wasn’t in school and didn’t appreciate the gravity of the situation!

The more serious the situation got, the more concerned I became. While neighbors were digging fallout shelters, she’d say “Don’t worry, Cuba is a long way from here.”

Finally, when I stated, “90 miles!” she understood my concern and showed me the coast of Florida on a map.

When Dad died, Mom told me God needed Dad for something nobody else could do; and because He had taken him, He would take care of us. Who was God? Where was Dad?

When I was young, everybody seemed to be a Christian. The Baptists didn’t dance, the Catholics ate fish on Friday, the Church of Christ didn’t believe in music, and the Mormons didn’t drink Coke until they bought stock in the company. The Methodists didn’t care about anything as long as you paid tithes. The Assembly of God danced in the aisles and spoke in tongues. Jehovah’s Witnesses didn’t salute the flag, and frankly, I was confused.

Throughout all this, Mom and I would read the Bible (I remember being VERY angry at Eve). At Easter sunrise and Christmas Eve services it seemed like everybody told the same story. Vacation Bible school and Sunday school gave me a concept of Jesus—His story and His life, His resurrection, and maybe a little bit of my salvation based on His substitutionary death. I took the classes at our Methodist church and was baptized by sprinkling during my fourth grade year. I didn’t feel very saved, very set apart, very special, and I certainly didn’t feel like I had a relationship with Jesus. Maybe I needed to be baptized by immersion? So our pastor borrowed a baptistry, and I was “dunked” when I was a teenager.

During high school, I was very defensive of Jesus. I knew that one didn’t fly any flag higher than the American flag, and that extrapolated to no one being elevated to the level of Jesus. But who was this Jesus?

When I read the Bible (having a covenant understanding of Jesus speaking to us as “spiritual Israel”) I tried to let Paul, rather than Jesus teach me “Religion 101.” However, none of the translations or versions of the Bible that I read allowed that to happen. Most of the pastors I approached (usually asking about this Melchizidek guy who seemed to be elevated to the level of Jesus), rarely had time or energy to challenge my confusion. So I became one of the many Christians “doing church” with no real understanding of my faith and not really believing that anyone could know for sure what was real and what was true.

I was married in 1974; and as a family, we joined the Presbyterian Church mostly for the business connections. I started teaching Sunday school—with all my clarity and understanding—but, they needed teachers, so I bravely stepped up to the plate. My husband was a deacon—voted in by the majority, no need for testimony, or a statement of faith. And for several years, we did church. In 1980, I was divorced. And became permanently scarred for useful service in the church ever again—you know, the “D” word.

I set off to believe in God, to worship Christ, but to discount the Bible because it “didn’t fall from the sky in book form.” I had questions: Who decided what to put in the Bible? Who decided what to leave out? What about those Dead Sea scrolls or the gospel of Thomas? Who did Cain marry, and how can you make those genealogies match?

I was introduced to the Urantia book. It’s not for a lazy searcher and, like all cult materials, it has truth mixed with error. I loved the book. Like all of the people who read it, I commented, “If this isn’t the way it is, it’s the way it should be.” I prayed as I read it, “Lord, I’m looking for the truth. If this book is a lie, show me the falseness.”

And, as I read, I found three errors.

1) The book teaches Jesus IS the son of God, but not the eternal Son of the Trinity.

2) The book teaches that the crucifixion was not required for God to love us.

3) The book teaches we all go on a Universe journey, that Jesus is the way to Heaven, but that if we don’t learn that truth in this life, eventually we will.

I, however, could not find a Christian to dispute these errors when I questioned them. Over the next two years, God worked in His mysterious ways. In April of 1997, I was traveling to Israel on a plane and randomly seated next to Don Veinot, who is the president of Midwest Christian Outreach. For ten hours on the plane and ten days in Israel, I stalked Don for information and took notes on placemats! He introduced me to apologetics, the concept of world views, and provided me with an outline that put belief systems into categories—a way to nail down the TRUTH! He never flinched.

I came home a changed and confident person. I was so excited to know about Christ and His work! I could not wait to share this new-found information, resources, and books, about the LIVING GOD we serve. The God who seeks us, who loves us, who died for us who is omnipotent, omnipresent and Who can arrange seating on planes and answers our prayers for wisdom. WOW!

I thank God for His faithfulness—for walking with me through the confusion. I thank Him for the soldiers like Don whom He has raised up to speak the truth in love, to confront error, and give a reason for the hope we have. I thank Him for the privilege of understanding confusion, and I pray that I never forget the experience. I pray that I am never too busy or too important—too busy “doing” church to recognize confusion in a fellow traveler. I pray that I can be a tool in His hand that by my having the experience of being loved, I will, in that love, reach out and serve others. I desire to be His ambassador, and that I will be kind to His reputation through my life.

Because now I know where Cuba is, and I hope to know where the enemy is.Ω

A note from MCOI:

We praise God for our friend, Dani Chaffin, and others like her whom God touches and uses to reach those outside the church as well as to challenge the church to see them as ones for whom Jesus died for. We also thank her for sharing her testimony on the printed page.