Risen shines with Creativity and Truth 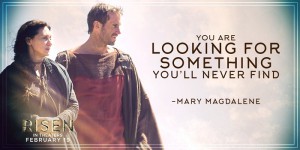 Risen starring Joseph Fiennes (Shakespeare in Love)  and directed by Kevin Reynolds (Red Dawn, Waterworld) is something rare in the rarefied air of Hollywood. A biblical film that has both style and truth. The screenplay was written by Paul Aiello. It’s his first movie script that has made it to the big screen. I know next to nothing about him but I hope he keeps making movie scripts. It really is a good movie. The premise is ancillary to the resurrection story. Fiennes plays Clavius, a Roman centurion, stationed in the back water of Judea. He’s not the Roman soldier who utters the “This was Truly the Son of God” statement from Mark. He’s not the Roman soldier who stabs Jesus’ side (though he does command it to be done.) He is the Roman charged with finding Jesus’ body after the tomb is found empty. The story hammers home the idea that if the authorities can produce a body, the Christian movement will die quick and quiet like so many other failed messianic movements. And so the most important manhunt in history begins.

Fiennes is a good actor and his portrayal of Clavius is mostly believable. He questions locals and the disciples in a 1st century version of police procedural complete with interrogation room. We see Mary Magdalene (played by Maria Botto) and the usual cast of Joseph of Arimathea and Peter. The most interesting performance comes from Stephen Hagan as goofy but earnest Bartholomew. Cliff Curtis delivers a most unusual and welcome take on Jesus who is only called “Yeshua.”

There is no whitewashing of the Resurrection story here for Christians to cringe at. I don’t think its much of a spoiler to tell you that Yeshua does indeed rise from the dead and Clavius encounter with him as he goes from skepticism to realization is something to savor in this movie. The writer took pains to stay on the fringes of the Resurrection story so that he doesn’t misrepresent anything. There is an interesting depiction of how the Roman guards can falsely corroborate the Jewish authorities’ claim that Jesus’ body is stolen and not face execution.

Tom Felton (that’s Draco Malfoy of Harry Potter fame) gives a decent performance as Lucius, Clavius’ junior officer but he shrinks in the shadow of the talent around him including Peter Firth who plays a cynical but believable Pilate. I’ve always been kind of annoyed by movie portrayals of Pilate as a milksop. It’s hard to square that with the historical portrait of a man who ordered the death of Jews just for protesting the Roman crest on the temple walls. Firth’s Pilate is scared but mostly of the Emperor. When faced with the possibility of Jesus’ resurrection, he snarls, “I will just have to kill him again.”

Be forewarned that there is some intense violence in the first act and the crucifixion is shown in all its gory detail. The appearances of Jesus are told with a winsome sense of wonder and Cliff Curtis’ smile is infectious. There is humor in the interplay between Clavius and Simon Peter. The last line of the movie will have you parsing Clavius’ words long after the credits.