What the Evangelical Haters Are Really Saying

When I became an evangelical Christian 40 years ago this past December, I had no idea what I was getting into.

I was only sixteen. So what were “evangelicals” to me? People who liked to run hospitals and rent out their churches for free? How should I know? 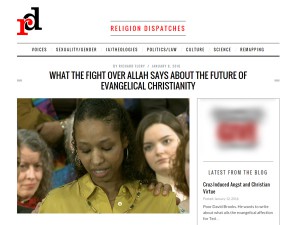 It took a few months for me to realize that not only had I become one of them, but that—hey!—now it was 1976!

This was the year that George Gallup (in Time magazine), and a Newsweek cover story dubbed, “The Year of the Evangelical!”[1. “Religion: Counting Souls,” Time, October 4, 1976; Kenneth L. Woodward, et. al., “Born-again: The Year of the Evangelical,” in: Newsweek, October 25, 1976.] This was the year that Jimmy Carter won the U.S. Presidential election with a Bible under his arm on his way to teaching Sunday School classes! The year that the New York Times Best-Seller list advertised that former Watergate hatchet-man Chuck Colson was Born Again!

It turned out that this evangelicalism thing I joined was kind of a big deal.

Getting to know this new world would take me through five evangelical institutions of higher education (two of which employed me, one conservative the other loosey-goosey), a brief stint in church ministry, and countless hours of pouring over the Bible and theological texts in worship services, adult Sunday School classes, small groups, and in my own private studies.

This is especially true of the secular-pluralist world, which prefers to view all religion as symptomatic of some form of social psychosis. The inhabitants of that world do not take the things we believe seriously for half a minute.

And why should they? We believe things that they find ridiculous. So ridiculous, in fact, that they are compelled to explain them in psycho-socio-political terms rather than as what they are: religious beliefs.

“Beliefs?!” In the great echo chamber of secular pluralism evangelicals do not have “beliefs.” Instead, evangelicals have “obsessions,”1Cf. Kristen Syme, “An Exploration into the Evangelical Obsession with the Unborn,” Religion Now, June 22, 2015. See also Rachel Held Evans’ reference to “just how out-of-control the evangelical obsession with homosexuality has become” in her article, “On the World Vision Reaction: Some Bad News, Some Good News, and Some Ideas,” May 25, 2014. Oh yeah, right: homosexuals have been pushing their social agenda for 40 years, but it’s the evangelicals who are “obsessed!” Thanks for clarifying that, Rachel! “paranoid delusions,”2Cf. Karoli, “Study: White Evangelical Christians Are Paranoid, Delusional,” Crooks & Liars, January 29, 2013. “persecution complexes,”3Cf.. Alan Noble, “The Evangelical Persecution Complex,” The Atlantic, August 4, 2014. And Randall J. Stephens, “‘Religious Liberty’ And The Origins Of The Evangelical Persecution Complex,” Religion Dispatches, January 12, 2016. and “bigotries.”4David Vanderveen, “Wheaton College’s Orthodoxy Police and the Spiritual Price of Bigotry” in The Blog, Huffington Post, January 11, 2016. Vanderveen proudly reminds his readers that he himself was forced out of Wheaton as a student in the early ’90s for publishing a sexually suggestive poem in a student publication. Oh, those nasty bigots! Whatever “beliefs” they claim to have can be safely dismissed as cruel dogmas designed to “abuse,” “terrorize,” and inflict “trauma,” in order to “shame” people into conformity.5Bill Moeller, “I Was Traumatized by Christian Dogma: I Won’t Do the Same to My Child,” AlterNet, July 31, 2014.

Nowhere do we find the prevailing secular-pluralist view that evangelicalism is more of a pathology than a religion more clearly expressed than in Richard Flory’s jeremiad on the Wheaton College/Larycia Hawkins controversy titled, “What The Fight Over Allah Says About The Future Of Evangelical Christianity.” For those with limited time on their hands, in lieu of Flory’s 1,435-word essay, I commend my own 285-word summary:

Evangelicalism is not founded on any actual beliefs. It is founded on the fear of change. And upon that foundation evangelicalism constructed a belief system to avoid dealing with change. All that theology mumbo-jumbo is just a smoke-screen for a brand of metathesiophobia (fear of change) that sprays the machine gun bullets of faux orthodoxy at anything that moves. So all this is happening because evangelicals are white, middle-class, straight, and politically and religiously reactionary.

But the times they are a-changing!

So there’s no real point in discussing the so-called theology of evangelicals such as those at Wheaton College. It can be safely ignored for the purpose of analyzing the Larycia Hawkins ordeal. And besides, Hawkins says there’s no real theological problem here, so we should just read her version of things and ignore Wheaton’s. After all, it’s safe to assume that since she’s black, female, and takes the predominant secular-pluralist view of the relationship between Islam and Christianity, and thus automatically qualifies as oppressed by the white-male-Christian-privilege culture, and that since all oppressed people are more credible than non-oppressed people especially when describing the multitudinous ways in which they are oppressed (including being fired from well-paying faculty positions), that to side with her is to side with all that is good and pure and wholesome in this case.

But not to worry: we won’t be bothered by these cultural troglodytes posing as theologians for too much longer. It’s gradually dawning on most people these days that what the ancient historian Tacitus wrote about the evangelicals of his day is still true: they are haters of mankind 6In his Annales (The Annals) 15.44, the Roman historian Tacitus (AD 56-117), called the ancient Christians “odio humani generis,” which is usually translated something like, “haters of mankind.”  who will eventually marginalize themselves out of existence. I’m writing this just to help the process along.

It can be comforting to believe that those you hate are simply pathetically-fearful little people who will gradually scurry off into some dark little corner. But the fact that you have to keep telling yourself and your friends these kinds of things tells us something about you.

It tells us that you’re more afraid of us than we are of you. And it’s all based on the same kind of stereotyping you expect us to believe that you find repugnant.7Joseph Loconte and Michael Cromartie, “Let’s Stop Stereotyping Evangelicals,” Washington Post, November 8, 2006. Ω

For full disclosure: our Senior Researcher Ron Henzel has an M.A. in Biblical Studies from Wheaton College (2002), and he is waiting for the Larycia Hawkins controversy at his alma mater to completely play out and for all the evidence to be made known before making any judgments about it whatsoever. Gee, how he wishes everyone else would!