The Birds and the Bees with Diversities 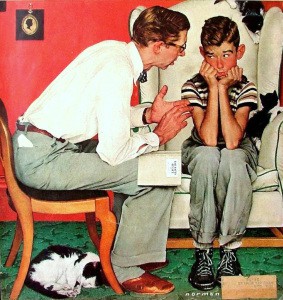 I’m being pressured by someone to do something I’m not sure I’m ready to do. Don’t get me wrong, I want to do it because I love the person and I want to show them that I love them very much. It’s just that it’s a big decision and I don’t know if I can do it.

I’m talking about the birds and the bees.

Specifically I’m talking about having “that” conversation with my eight year old. Now, some of you might be thinking, “he’s eight and you haven’t explained this to him yet?” Yes and no. My son knows the basics. We’ve called things by their proper names from the time he could talk. He understands the differences between boys and girls. Any father having to tell his son about sex is going to be nervous. But if you are Christian, there’s a whole new level of concern. Sex isn’t just about plumbing. It is about culture and worldview.

Take for example a conversation I overheard in a bookstore a few days ago. I was browsing with my wife on one of those rare we-don’t-have-the-kids-let’s-be-around-adults moments. I was doing my typical shelf-scan in the sci-fi section when I over hear the following:

I froze. Curious as to what he would say. Without batting an eye, he said:

“Oh, that stands for Gay, Lesbian, Bisexual and Trans-gendered.”

I stole a peek at the little girl’s face. Her face showed recognition as if recalling what was no doubt an earlier conversation. She shrugged.

And off they went.

That the father and daughter had discussed LGBT before and that is the reason for her non-nonchalance is only a guess but a reasonable one. I’ve written a lot of about sex and why it is the “Canary in the Coal Mine” for our culture. I’ve even written about what I would say if my child told me they were gay.

I’m not terribly nervous about explaining the mechanics of sex. I’m nervous about my child understanding the Christian worldview about sex. Because when he adopts that worldview, it will forever make him an outcast in this age of sexual diversities. I use that term in the plural because there is more than one kind of sexual diversity. There’s genitalia, sexual preference, and appearance. Facebook has now recorded 56 custom genders for people to choose from.

How do I explain that to my son? Sure I don’t have to do it right away. His eight-year-old brain doesn’t have to deal with the difference between trans-gendered and cis-gendered . It’s unlikely that my son will have to learn the correct address lest he get fined for sexual harassment. But someday soon I will have to explain why the vast majority of people in the world he lives in don’t agree with his dad and mom about sex.

He will be expected by his society to hold two seemingly contradictory ideas in tension. Sex is and is not at the same time a big deal. Sex is no big deal. “It’s just sex” after all. Who you have it with and when and why and how are all just choices in a vast menu. He will be told his Christian upbringing made too much of sex. We were sex obsessed and all secretly self-loathing gay people. On the other hand, sex as in gender and equality is a very very big deal. It’s fundamental to someone’s very identity. Restrict sex to marriage only and you are accused of being a prude If you question any part of it, you have committed the secular sin of discrimination or worse harassment.

He will be called upon to participate in cultural rituals in the proper way like not only tolerating sexual diversities but to give them nothing less that full-throated abandon. If he doesn’t he will be ostracized by some, gawked at by others. But he’ll be in good company. 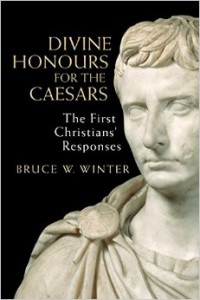 I’ve been reading this book by New Testament scholar Bruce Winter, Divine Honors for the Caesars. It is about how the first Christians responded to the cult that grew up around the Emperor as a god. When Christians confessed that Jesus was Lord; it implied that Caesar was not. The city of Sardis (yep, the one mentioned in Revelation 3:1-6)  was one of the first cities to offer divine honors to Augustus and Julius Caesar. With public sacrifice and public spectacle, the entire town was expected to come out and wear their bright finery as Sardinian society deified their emperor. It’s speculative at best but Winter wonders if this is the what it means when Christ says there are some who haven’t “stained their garments” and will walk with him in white (Rev. 3:4).

I will, no doubt, have more to say about Winter’s book after I finished it. For now, let me say that I’m learning that the first Christians were faced with same choice of assimilation or alienation. Imagine a first century father having to explain to his son about why they didn’t join the bright spectacle down at the center of the city.

“Dad, what’s going on outside? I see people dressed up in fine colored clothes and wreaths and headed to the piazza. It looks like fun!”

“Son, come back from the window and close the shutters.”

“Why dad? Why can’t we go? No one’s gonna buy any tents today. Everyone is headed to some sort of parade!”