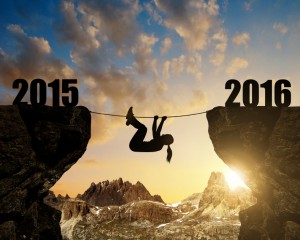 It is New Year’s Eve, the end of another calendar year. Many are preparing to celebrate tonight, ushering out 2015 and ringing in the New Year. New Year’s resolutions will be made, most of which will be broken or forgotten in short order despite all good intentions. Many will look forward with eager anticipation for what the New Year will bring – others are just glad to see 2015 go! J

Media outlets will do their obligatory year in review shows. How will we remember 2015? On the national scene, the 2016 Presidential election dominated much of the news cycle in 2015. The rift between left and right seems to have widened exponentially. The anger has become so intense, it seems like we are in the middle of another American civil war, albeit a Cold war so far.

Christians have awakened to a new reality of anti-Christian sentiment and activism. This anti-Christianism has been steadily increasing over the past several years, but seems to have reached new lows in 2015, to the point that even those Christians with their heads firmly planted in the sand are being forced to take notice. A noticeably more anti-Christian government has come to the point of actually punishing those who disagree with the positions of our leftist PC dominated culture. Gender (and even race in some cases) is now a fluid thing – you are what you ‘feel’ that you are, and God help the man or woman who cannot happily embrace this concept. “NYC will fine employers up to $250,000 for referring to ‘transsexuals’ by their natural gender.”

Failing to use an individual’s preferred name or pronoun, under the new ban, will be considered a violation of New York City Human Rights Law, punishable by fines up to $250,000.

Sometimes it feels that the world has turned upside down! Wrong is now right, good is now evil. But, just as we recognize that Christmas is near when the stores start playing Christmas music, reminding us that ‘it’s beginning to look a lot like Christmas,’ we should recognize that our culture today is looking an awful lot like the perilous days depicted in 2 Timothy 3:1-5.

But mark this: There will be terrible times in the last days. People will be lovers of themselves, lovers of money, boastful, proud, abusive, disobedient to their parents, ungrateful, unholy, without love, unforgiving, slanderous, without self-control, brutal, not lovers of the good, treacherous, rash, conceited, lovers of pleasure rather than lovers of God – having a form of godliness but denying its power…

However, as dark as culture seems to be getting, we know that Christ is with us and is in control. As Joy and I reflect on the ministry in 2015, we are truly amazed and encouraged. We started the year as over-the-road trick drivers, working as a team. It was very difficult to do the work of the ministry from the truck, but God graciously provided a route which had us home and in the office every other week, so it was possible to continue dong the ministry, although in a truncated form. Then, in the spring, that route came to an abrupt end, and we were facing the prospect of being out 6 weeks or so, and then home one week. We knew that was not going to work, so we left that company. I found a trucking job where I was told I could be home every weekend, and spent several weeks training to drive a tanker truck. However, the weekend home was not really a whole weekend and we came to the realization that it would be impossible to continue doing the work of the ministry with only a few hours a week at home. It would be utterly impossible to keep up with the demands of answering questions, counselling cultists and helping family members of cultists, let alone finding time to do research and keep up the writing schedule. It became abundantly clear that unless something changed, we would have to close the ministry.

Well, something did change! One of our supporters sent a month’s support, which bought us some time. Then, God moved another one of our supporters to call and ask what it would take for us to work full-time in the ministry. After seeking the Lord, he called to commit to 100% of our support for six months, in order for us to focus full-time on the mission of MCOI, and work on raising our on-going support. (Fundraising is impossible to do from the road, since it involves meeting with pastors and speaking in churches). Needless to say, it has been an interesting year thanks to the benefactors God raised up. We were able to do the work of the ministry. Joy was able to write again, and we were able to attend conferences together where I would speak. Quite a wonderful blessing!

MCOI has been blessed to be used to lead several JWs to the Lord, including 2 families. That was exciting. I have been on the phone almost everyday with individuals who were in cults or false religions – people who are now believers but are trying to sort out what they had been taught from what the Bible actually teaches.

Being available to speak in churches has been especially encouraging. I have always loved teaching and I have had to turn down these opportunities when we were on the truck. One of the few bright spots in an increasingly dark world is that all the opposition tends to alert Christians, both leaders and laypeople, to the need to take a stand, and to protect their flock, especially their young people, from getting swallowed up by the culture. Yes, there are many churches out there who have lost their way, and compromised their Christian beliefs or outright abandoned the battle, but there are lots of pastors who are very serious about equipping their flock to reach out to people lost in cults and false religions, and to become capable of offering rebuttals to an increasingly pagan culture. I also had a wonderful opportunity to teach a semester at Dayspring Bible College. The class was “Introduction to Cults and New Religions,” and the students were very attentive and seemed eager to learn how to interact with people in cults, as well as confront the culture that surrounds us.

In May, we drove to Denver – we have no problem driving! – for the annual EMNR Conference. Joy had not been to a conference in many years, and very much enjoyed being with ministry friends again and being encouraged in the ministry. Then, in October we drove east to attend and minister at the 37th Annual Witnesses Now for Jesus Convention in New Ringgold, PA. Again, Joy had not been to that conference, her favorite, in 8 years, and was so blessed to reconnect and reignite her passion for reaching JWs. Later in October, I flew to Salt Lake City to attend – for research and evangelistic opportunities, the Parliament of the World’s Religions. There was a group of about a dozen evangelical friends there from various apologetics ministries, who hung out together and provided support and encouragement to each other. With nearly 10,000 conference attendees open to spiritual discussions and a dozen or so Evangelicals present, engaging in discussion was not difficult.

God is still with us, and He is good! We are also thankful for the friendship and work of others in the MCOI team. Snarky the Apologist has been very faithful and effective in producing the YouTube videos which God has been using to reach JWs. Jonathan Miles is a gifted thinker and writer who regularly contributes to the blog. He is also a great sounding board, as we wrestle with how to respond to a culture that is becoming progressively more pagan in worldview. We also could not accomplish our mission without our faithful friends, Corkey and Todd McGehee, who edit and lay out the Journal for printing. They are also actively involved in reaching out with the gospel of salvation to many that would not come in contact with the church.

We do not know what 2016 holds. We do know that as the culture becomes increasingly dark, even many non-believers are waking up to the sobering realities of dealing with a culture that has gone off the rails in so many alarming ways. Many non-Christians have enjoyed the benefits of living in a predominantly Judeo/Christian nation all their lives – and some of them are rather fearfully staring into the abyss of lawlessness and chaos, and at the ongoing disintegration of this once great nation. Where chaos and anarchy is allowed to reign, loss of precious freedom inevitably follows. Some of these people, perhaps many, are likely to be increasingly looking for solid answers from us, the church and the people of God. What is going on in the nation and the world? Why is all this happening? What is going to happen to me and my family? It is looking unlikely that we will be able to turn this nation around through the political process or any other way that we can see, but we should be looking for opportunities to help lost people deal with this alarming new reality, and to point them to Jesus and the promise of peace with God, forgiveness and eternal life. This life is short and difficult, but eternity with God is long and blessed.

Is being an ambassador to cults and culture outside the walls of the church a mission after God’s own heart? I believe it is. Will God raise up sufficient support through churches and individuals who believe being missionaries to cults and New Religions is important? I don’t have the answer to that question, but we look forward to 2016 to see where the God of all provision will lead. We have a way to go, about $3,400.00 a month, to full support. Perhaps you would consider a one-time year-end gift or perhaps committing to regular monthly support. You could even use the donate button at the top of the page. But, for today, the last day of 2015, Joy and I want to thank you for your encouragement, prayers and support.Ω