Do All Roads Lead to God? 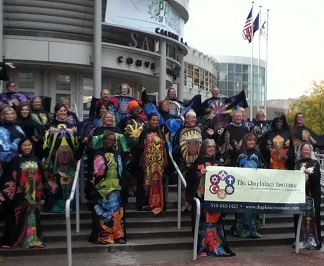 “All roads lead to God” was the prevailing idea and guiding principle at the 2015 Parliament of the World’s Religions (October 15-19, 2015) in Salt Lake City, UT. One of the first things an attendee saw when they arrived to register was a Jain Temple built in the entry hall of the Salt Palace Convention Center, oftentimes complete with Jains performing their worship rituals. The Jains also had a booth in the exhibition hall and a prominent part of their display was the popular if timeworn story of The Blind Men and the Elephant. The essence of the story is that six blind men touch an elephant and describe what the elephant was like, depending on which part of the elephant they had personally come into contact with. One described the tail, one the trunk, and the others various other physical aspects of the beast. Naturally, a fierce argument ensued about who was right about elephant nature, until a seventh person brought about peace by saying that all of them were actually right – the elephant is all of those things! It is an interesting parable, and it is well suited the Parliament crowd’s ideas about relative truth. Why should people from the world’s various religious traditions argue about the nature of god when it is all really just a matter of differing perspectives? Can’t we all be right? Unfortunately, there are at least four problems with the story.

First, the story teller is sighted and so can see that the object the blind men are describing is an elephant, and knows exactly what the elephant is really like. He can easily see that the blind men are deceived. Second, the men in the story were blind, so the only thing they knew about the beast was its name – elephant. Third, all of the blind men were wrong – none of them were right! An elephant is not a pillar, a rope, a thick branch of a tree, a big hand fan, a huge wall of a solid pipe – it is a large beast with a trunk, tail, big ears, etc. The sighted, supposedly “wise man” in the story used the men’s blind ignorance to deceive them, in order to bring an end to the argument. His guiding impulse was that peace is infinitely better than discord, even if based on a lie.

We met many blind men and women at the Parliament. Bill McKeever (Mormon Research Ministry) and I spent some time talking with the representative of the Claremont School of Theology at their booth. As it turns out, the female representative of that institution is an agnostic. Puzzled, Bill asked her how it is that an agnostic could represent a school of theology since theology is the study of God? She proudly explained that the school has something for everyone. If someone is more of a conservative Christian, Claremont has some professors that would lean in that direction, but they also offer an Islam school of theology and also one for Buddhists. Therefore one could believe in god or, as with some Buddhist sects, be agnostic or even atheist. Her idea, like the Jains, is that all of us have a piece of the truth, and that the ultimate good is that we should live in peace and harmony with the adherents of other “pieces.”

As I spoke with the Hindus, the warm and fuzzy story was the same. All roads lead to god – we all have our little piece of the puzzle. However, even as each group affirmed in theory that all roads are indeed leading to God – you quickly discover that they consider their particular road to be more enlightened, with a better grasp on a bigger piece of the truth. Most were in agreement, however, that all Evangelical Christians were “haters” – less informed, less evolved, and on an inferior path to the “truth,” whatever that is!

The Parliament is a mission field, and we believe it is important to be there, even for that reason alone. But another important aspect is to see and report what the Parliament’s ultimate goals are for our world. They are not playing games – they intend to transform the world! It is very important that Christians and churches get their heads out of the sand and understand the demonically inspired entity that is forming right under their very noses. The Parliament’s movers and shakers are currently working hard to become attached to the United Nations. This goal would fit perfectly the vision of the late Robert Mueller, the former 40-year United Nations Assistant Secretary-General. He believed in order to have a one world government, which is what the UN is working for, there needed to be a one world spirituality to put an end to religiously motivated strife.

We met Robert Muller at the 1993 Parliament in Chicago after he had given the opening address. Even 22 years ago, it was obvious to us that their goal was the elimination of freedom of religion and speech, to bring about the installation of the one world government the globalists so fervently seek. But the Parliament has come a long way since 1993, with nearly 10,000 attendees at this convention in 2015. In their updated (from 1993) document, “Declaration Toward A Global Ethic & A Call to Our Guiding Institutions,” the section titled “Our Approach” declares:

The Parliament of the World’s Religions seeks to promote interreligious harmony, rather than unity. The problem with seeking unity among religions is the risk of loss of the unique and precious character of each individual religious and spiritual tradition; this understanding is key to our framework.

Interreligious harmony, on the other hand, is an attainable and highly desirable goal. Such an approach respects, and is enriched by, the particularities of each tradition. Moreover, within each tradition are the resources (philosophical, theological and spiritual teachings and perspectives) that enable each to enter into respectful, appreciative and cooperative relationships with person and communities of other traditions. [1. “Declaration Toward A Global Ethic & A Call to Our Guiding Institutions”; 2015 Parliament of the World’s religions, 70 E. Lake St., Ste 205, Chicago, IL 60601, p 4)

They have decided that “keeping the cultural and religious character of each religion is important” but any claims of truth in any absolute sense must be abandoned on the altar of “interreligious harmony.” After all, as the thinking goes, all roads lead to God.

It may surprise many reading this when we say that all paths do indeed lead to God, because the almighty clearly states that all will meet Him.

The redeemed on the narrow path, having believed and made that confession to God in this life, will be forever with Christ, and will not suffer condemnation at the Great White Throne.

…”if you confess with your mouth Jesus as Lord, and believe in your heart that God raised Him from the dead, you will be saved, for with the heart a person believes, resulting in righteousness, and with the mouth he confesses, resulting in salvation.” (Romans 10:9-10)

“Therefore there is now no condemnation for those who are in Christ Jesus.” (Romans 8:1)

Sadly, all other “paths” will inexorably lead to condemnation at God’s Great White Throne judgment:

Then I saw a great white throne and him who was seated on it. From his presence earth and sky fled away, and no place was found for them. And I saw the dead, great and small, standing before the throne, and books were opened. Then another book was opened, which is the book of life. And the dead were judged by what was written in the books, according to what they had done. And the sea gave up the dead who were in it, Death and Hades gave up the dead who were in them, and they were judged, each one of them, according to what they had done. Then Death and Hades were thrown into the lake of fire. This is the second death, the lake of fire. And if anyone’s name was not found written in the book of life, he was thrown into the lake of fire. (Revelation 20:11-15)

No one will enjoy meeting God at the Great White Throne Judgment. All paths do indeed lead to God, but not all meetings with God will be equally pleasant.