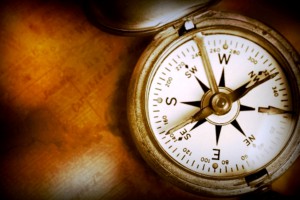 1 a :  the act or process of orienting or of being oriented
b : the state of being oriented; broadly :  arrangement, alignment
2 a : a usually general or lasting direction of thought, inclination, or interest
b :a person’s self-identification as heterosexual, homosexual, or bisexual (sexual orientation)1http://www.merriam-webster.com/dictionary/orientation

This word “orientation” has a lot of different connotations in our society. People want to know what your political orientation is. Are you left or right? Conservative or Liberal?

Then more and more, “orientation” has come to mean your sexual preference.

“Orientation” has to do with direction. Where are you in relation to some fixed  point? There’s a whole sport dedicated to figuring out your orientation relative to a fixed point. 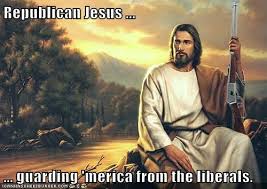 So the question is “What is the orientation of Christians?” in this metaphor. What is the fixed point for us to determine our relative position? It would be easy to just give the Sunday School answer which is always “Jesus.” But the problem is that there are so many Jesus’ out there. There’s conservative Jesus. 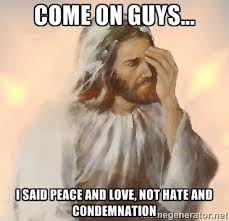 Mikalatos wrote a book called “Imaginary Jesus: A Not-Quite-True Story.” It a hilarious look at all the stuff we pile on Jesus sometimes to make him what we want him to be. Here’s a great scene:

A swarm of denominational Jesuses trampled New Age Jesus in their hurry to get to me. Catholic Jesus and Protestant Jesus argued the whole time. Baptist Jesus was dragging an enormous bathtub full of water behind him. The various Orthodox Jesuses were carrying tasty treats from Russia, Greece, Romania, and all over the world. Stern Jesuses, laughing Jesuses, Emergent Jesus and Emerging Jesus (like good and evil twins, I guess . . . but I can never remember which is which), a few Jesuses who barely fit the description like Universalist Jesus (dressed like Buddha, six arms like Shiva) and the six-inch-tall Bahai Jesus, and all of them wanted a piece of me. Health Nut Jesus came running out of the health section wearing tennis shorts and a headband. In the back of the crowd someone had found Feminist Jesus, and she was biting Patriarchal Jesus in the shoulder. He yowled in pain but wouldn’t hit a woman in public.

Maybe our orientation should be to a story. So when someone asks our orientation whether sexual or political, we could say “Well, first I’m oriented towards a story about the way things are.” Sure that won’t satisfy people. It sounds corny. It might keep them interested, however, for a few more minutes than “I’m a Republican” or a “I’m a Libertarian,” or even “I’m a Christian” which can all be dismissed in their minds as the pre-conceived judging begins. Then we could orient from this story to how our  politics or our sexuality is oriented relative to that story. The story of course is the Gospel. (stop rolling your eyes, I see you!). The story is how God is fixing things. It was a guiding story that every ancient Jew and the contemporary Jews of Jesus’ day thought they were enacting. And when Peter told the Jews on the day of Pentecost (Luke 2) that a new chapter had been written, the wanted to know how they fit in:

Let all the house of Israel therefore know for certain that God has made him both Lord and Christ, this Jesus whom you crucified.” 37 Now when they heard this they were cut to the heart, and said to Peter and the rest of the apostles, “Brothers, what shall we do?” 38 And Peter said to them, “Repent and be baptized every one of you in the name of Jesus Christ for the forgiveness of your sins, and you will receive the gift of the Holy Spirit.39 For the promise is for you and for your children and for all who are far off, everyone whom the Lord our God calls to himself.”

The Gospel is not just the good news of how we can be saved from condemnation. It is so much more than that. It is news that Jesus has conquered the powers of this world. He is both Lord and Christ.  Note how Paul mentions this conquering Christ in the same context of salvation in Colossians 2:

When you were dead in your sins and in the uncircumcision of your flesh, God made you[d] alive with Christ. He forgave us all our sins, 14 having canceled the charge of our legal indebtedness, which stood against us and condemned us; he has taken it away, nailing it to the cross. 15 And having disarmed the powers and authorities, he made a public spectacle of them, triumphing over them by the cross.

This is what it means when Jesus says “All Authority in heaven and upon the earth has been given to me” and when Paul describes Jesus as “the beginning and the firstborn from among the dead, so that in everything he might have the supremacy.”  And that was indeed good news to a people who were suffering under the yoke of petty local dictators and emperors who thought they were gods. The good news is a story about God’s triumph over personal, national, and global sin through his sacrifice. That story is our map. The exposition of that story in our worship and our reading of God’s word, is our compass. This applies first to our thinking and world-view:

We destroy arguments and every lofty opinion raised against the knowledge of God, and take every thought captive to obey Christ . . . (2 Corinthians 10:5a)

Often this verse is invoked to talk about our inner thought-life and how we can control it. That’s not the context however. The context is every idea, every philosophy, every worldview, every way of thinking about humanity is subjugated to the good news of Christ who has conquered all things and now sits at the right hand of the father. When MCOI went to the 2015 Parliament of the World’s Religions, we had every right and the responsibility to challenge every religious tradition and to serve notice that Jesus has claimed to be above all. This is the active working out of that same story that orients us. This not only applies to our examination of doctrines and religions, but it also orients everything we do. Notice how this applies, for Paul, first to our corporate worship and second to our daily lives (Colossians 3:16-17):

16 Let the message of Christ dwell among you richly as you teach and admonish one another with all wisdom through psalms, hymns, and songs from the Spirit, singing to God with gratitude in your hearts. 17 And whatever you do, whether in word or deed, do it all in the name of the Lord Jesus, giving thanks to God the Father through him.

What does it mean to be constantly orienting toward the Gospel story? I’ve read a lot from Marcia Montenegro about Mindfulness meditation. The idea of mindfulness is to focus on one’s breathing and just be present rather than think. Often it is referred to as “being present” rather  than distracted with the past or the future. Marcia points out many major problems with mindfulness meditation as a spiritual practice. But what if there is one timeless sliver of truth to the practice? What if that meditation wasn’t on our “breath” but rather on the Gospel story? In other words, we are not meditating mindlessly on nothing but rather meditating on something of the greatest value, the Gospel story? When we feel ourselves dwelling on the past or worrying on the future, we could instead take a moment to orient ourselves to the present not in narcissistic contemplation of our own divine breath but towards a story that is anchored in the past and looks forward to a future glory but is being acted out this very minute all over the world. “At this moment, how do I fit into the Gospel story?” In other words, a small moment to re-orient ourselves. When we are feeling anxious about what will happen or berating ourselves for the mistakes we have made in the past, we can orient ourselves to the present by remembering that this Gospel story isn’t just a story about some people in the past or vision of the future of mankind but it is our story and we  are most definitely in it.