The Meal Jesus Gave Us 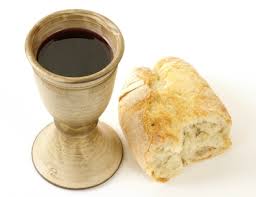 My church does does a few weird things that I’ve come to love. The first is that we have communion every Sunday. I know, I know. For some of you that’s not weird at all. But before I moved above the Mason-Dixon line, we were lucky to do it once a quarter. I was afraid that if I did it every Sunday it would lose its meaning. I didn’t want that experience to as stale and flat as that little cracker. At the Witness Now for Jesus conference that I attended once, we had to leave before Communion on Sunday. But I’ve heard about it. I’ve heard about ex-JWs taking communion for the first time. I’ve heard about the special celebration of that event. And I want to see it someday. But more importantly I want communion to be special for me.

The other weird thing my congregation does is one of our members always gives a devotional reading before communion. I like this a lot. Anything that gets the laity out of the pews (or in our case plastic chairs) and engaged in the worship service, is good. So every four or five weeks, I get to talk about the meal that Jesus gave us.

Isn’t that a great phrase? I didn’t come up with it. I got it from N.T. Wright’s little book. 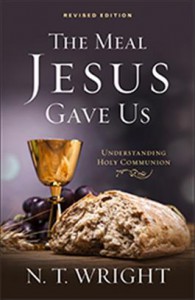 But I do love that phrase “The Meal Jesus Gave Us.”

Wright’s Anglican and he looks at Communion a bit differently than I do but I don’t have to get into a debate about transubstantiation or consubstantiation or “real presence” to be able to say this: Jesus wanted us to do this in remembrance of him but that’s not all communion is. It is not less than remembrance but surely it is more. That “more” is what keeps communion from becoming stale habit.

What is the “more than remembrance”?

I imagine it is what every JW who takes communion for the first time experiences. Not a just a remembrance but a fresh meeting with Jesus. What I have to remember when I take that tiny little cracker and that thimble full of grape is that Jesus gave this to me so that I could worship him. It is on a par with prayer or bible study. He gave me this meal so that I could remember him not only as he was but also as he is.

Probably the one verse that never gets old when I read it is Revelation 21:1-3

Then I saw “a new heaven and a new earth,for the first heaven and the first earth had passed away, and there was no longer any sea.  I saw the Holy City, the new Jerusalem, coming down out of heaven from God, prepared as a bride beautifully dressed for her husband.  And I heard a loud voice from the throne saying, “Look! God’s dwelling place is now among the people, and he will dwell with them. They will be his people, and God himself will be with them and be their God.

There is so much there but what comes across every single time I read it is that God intensely and passionately wants to dwell with his people. God is not satisfied with us praying to him. He is not satisfied with the Spirit just dwelling our hearts. He wants to be with us and to be our God. Isn’t that just a little bit of what happens when we eat the meal Jesus gave us?

Think about this. On any given Sunday morning millions of Christians are partaking of the exact same event and it has been going on for roughly 1982 years. That meal is one thing that has marked out Christians everywhere ( even baptism as an event was practiced by other Jewish sects). When I take that cup and that bread, I’m not just remembering (though I am doing that) but I am becoming part of a story that began in the upper room. That’s more than just remembering. That’s a bit like this scene from Revelation 7:

After this I looked, and there before me was a great multitude that no one could count, from every nation, tribe, people and language, standing before the throne and before the Lamb. They were wearing white robes and were holding palm branches in their hands. And they cried out in a loud voice:

“Salvation belongs to our God,
who sits on the throne,
and to the Lamb.”

So communion begins to look like communal worship. It isn’t just communion with God. It is communion with each other. It is the moment when God’s story becomes my story. That’s the meal that Jesus gave us.