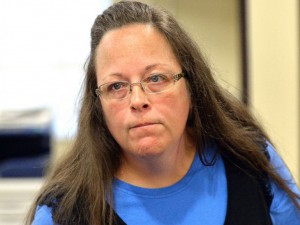 Kim Davis, the county clerk in Rowan County Kentucky is refusing to issue marriage licenses to same-sex couples. The Governor of the Kentucky has ordered all county clerks to comply with the Obergefell Supreme Court decision. Davis applied for a stay from the US Supreme court. The court denied her application. Kim Davis should resign her elected position and not force the state of Kentucky to impeach her.

Surprised?  I had intended to continue my Hypocrisy, A Field Guide this week but Ms. Davis’ protest interrupted. We’ll return to it in my next post. Today, I want to make the case that what Davis is doing is not the right way to stand up for the Christian faith. In fact what she is doing is damaging the public perception of the Christian faith. Where I grew up in Mississippi we had a saying for people who made a very public expression of their disapproval in a way that wasn’t really helpful and just served to embarrass everyone. We called it “Making a Stink” as in “That old lady is making a stink again about the high price of her water bill to the Water Department.”  There are several reasons why I think she should resign rather than cause a stink.

Kim Davis is no Wedding Photographer.

What Davis is doing isn’t standing up for her religious rights. She’s not the owner of a bakery or a wedding photographer. She is a government official who took an oath to uphold the laws of the state of Kentucky. At present that means she took an oath to issue marriage licenses in the power vested in her by the State of Kentucky. Since June, Davis has refused to issue any marriage licenses. Davis says her mandate is from God.

As one couple, David Ermold and David Moore, tried to engage her in an argument, Ms. Davis said several times that her office would not issue any marriage licenses. “Under whose authority?” Mr. Ermold asked.

“Under God’s authority,” she replied.

I understand the creeping fear that religion will not be tolerated at all. I fear the ACLU planet where Evangelicals are consigned to the dust bin of history. But this really isn’t about some separation of church and state. Ms. Davis chose to run for state office. She agreed to be the State. Now that the State has a law that violates her convictions, she should exercise her freedom of religion and resign. Let former County Clerk Linda Barnette show how it’s done :

County Circuit Clerk Linda Barnette announced her resignation on Tuesday, citing the Supreme Court’s decision to legalize same-sex marriage. Barnette has been the circuit clerk for 24 years, and announced that her resignation is effective immediately.

“The Supreme Court’s decision violates my core values as a Christian,” she wrote. “My final authority is the Bible. I cannot in all good conscience issue marriage licenses to same-sex couples under my name because the Bible clearly teaches that homosexuality is contrary to God’s plan and purpose for marriage and family.”

Kim Davis is not being forced to do anything. She can resign and uphold her convictions. I have heard non-Christians admire Linda Barnette for standing up for her convictions (even while disagreeing with those convictions) but Davis is just making a stink when she claims God’s authority to stay in office but does not follow the laws she promised to uphold.

The county clerk does not approve of any marriage. She is not a pastor. She is a record keeper and license issuer. If someone told me that they were going to refuse to take photos at a gay wedding, then I would say I accept of their decision. To be a creative part of a wedding as photographer is to tacitly participate in the ceremony. To be a good wedding photographer one needs to identify with the happy couple in a way that selling the crepe paper at the party store isn’t.  If someone told me they were opposed to filing the paperwork for the wedding, I would say what that recording the marriage is like selling the crepe paper. To be a good County Clerk you must make sure the certificates are filed properly. You are not endorsing anything. If Davis wants to refuse to be in the photograph with the happy couple so be it.

Kim Davis is being Selective and therefore Hypocritical

What does a county clerk do? She records every birth, death, marriage and divorce in the county. If signing the marriage certificate is against Kim Davis’ Christian convictions then recording most divorces should be also. Signing a marriage certificate isn’t supporting the wedding any more than signing the death certificate of a suicide is condoning the suicide. County Clerks sign business licenses. If a Christian Clerk is issuing a business license for a legal strip club, they would have to sign the license and then write an editorial about why people shouldn’t go there to voice their convictions. Otherwise she’s just making a stink about marriage.

Kim Davis is not Daniel

The only examples in the Bible that we really have of a Christian who was also an administrator official of a Secular state is Daniel and Matthew the tax collector. Matthew resigned to follow Jesus. Daniel did his job. The King of Babylon issued a degree that everyone had to pray only to him. Daniel defied the order. One Kentucky resident sees clear parallels between Davis and Daniel .

“He delivered Daniel from the lion’s den,” Mr. McKinney said. “So I trust he will deliver her.”

There are several differences between Kim Davis and Daniel. First, Daniel didn’t choose his job. It was chosen for him. Daniel 1:3

Then the king ordered Ashpenaz, chief of his court officials, to bring into the king’s service some of the Israelites from the royal family and the nobility

When he entered the Babylonian training program he asked not to eat the meat sacrificed to idols. The official of Babylon graciously allowed him to eat vegetables. That was God’s provision. The official could have done otherwise. Daniel 1:8-10

But Daniel resolved not to defile himself with the royal food and wine, and he asked the chief official for permission not to defile himself this way. Now God had caused the official to show favor and compassion to Daniel,  but the official told Daniel, “I am afraid of my lord the king, who has assigned your[c] food and drink. Why should he see you looking worse than the other young men your age? The king would then have my head because of you.”11 Daniel then said to the guard whom the chief official had appointed over Daniel, Hananiah, Mishael and Azariah, 12 “Please test your servants for ten days: Give us nothing but vegetables to eat and water to drink. 13 Then compare our appearance with that of the young men who eat the royal food, and treat your servants in accordance with what you see.”

Babylon didn’t run elections asking for those who will obey the king. It was assumed that everyone obeys the king or they die. Daniel couldn’t have resigned if he wanted to. He asks permission for a compromise. Test us. If we fail well then treat us as you see fit. This is hardly what Davis is doing.

Daniel doesn’t protest the decree to only worship the king by making a stink. Instead he simply continues doing what he has always done without hiding it. Daniel 6:10-11

Now when Daniel learned that the decree had been published, he went home to his upstairs room where the windows opened toward Jerusalem. Three times a day he got down on his knees and prayed, giving thanks to his God, just as he had done before.

His act of disobedience was to keep serving God by praying daily. Davis’ way of defying the powers that be is to bring the county clerk’s office to a grinding halt by refusing to issue any marriage licenses–a clear violation of the promises she chose to make when running for elected secular political office. I am going to pray that God gives her the grace to resign and she can find another job to support her family.