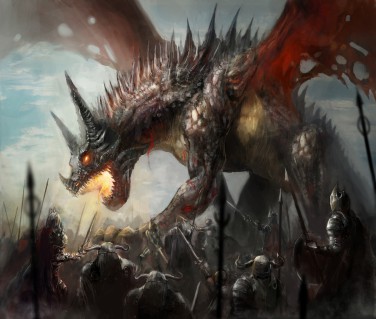 Fear of the unknown is a major bogeyman of human existence. On at least two ancient maps the Latin phrase, “HC SVNT DRACONES” (hic sunt dracones, ‘here are dragons’) appears. Here Be Dragons in Wikipedia explains:

“Here be dragons” means dangerous or unexplored territories, in imitation of the medieval practice of putting dragons, sea serpents and other mythological creatures in uncharted areas of maps.

Today many conservative Americans, especially Christians, feel we are in culturally uncharted territory and it is, or feels like it is, a fearful place to be. Why does it seem as though our own government suddenly sees us as the enemy? When did that happen? Why does morality seem turned on its head, that murder of innocents and use of their torn bodies is acceptable? How can people brazenly point the finger at us – claiming that our “outdated” views are making us the problem in society? It is disconcerting, because we remember the not too distant past when our supposedly antiquated views were almost universally accepted as true, even by non-Christians. We cannot count on our vote to change things, as it has become obvious that we are stumbling blocks, persona non grata, to the very “conservative” politicians that we may have hoped would stop the insanity. While we recognize that there still are Godly men and women in our government, they seem quite outnumbered, and often seem cowed by the blowback they receive, if and when they take a stand. Not much different from the rest of us, are they? Neither traditional political party seems any longer to champion Christians or pay more than lip service to our beliefs. Illinois Republican Senator Mark Kirk stated he will vote against defunding Planned Parenthood. Presidential candidate Jeb Bush was head of an organization (Bloomberg Family Foundation) which gave over 50 million dollars to Planned Parenthood, which is the perhaps the largest abortion provider. And of course, liberal Democrat politicians are forcefully defending Planned Parenthood and attacking any who expose or oppose Planned Parenthood as being engaged in an imaginary war on women, while ignoring the fact that lots of tiny women are being dissected and sold piecemeal by organizations such as Planned Parenthood.

Then there is the issue of so called “gay marriage.” While the term homophobia is a misnomer, since Christians do not fear homosexuals we do understand the physical, mental and spiritual peril to the persons who practice such things, and to the spiritual health of the society that our children and grandchildren are going to inherit. The discerning can also see that there are many more “alternative lifestyles” waiting in the wings to demand first tolerance and then full acceptance – or else! For example, on what basis can pedophilia be condemned? After all, as long as the participants “love” each other, and no one gets hurt, who are we to deny them the right to engage in their lifestyle and to “marry.” What about bestiality, polygamy, polyamory? Can it not be said that “God made everyone the way they are?” Who are we to judge? What right has society to forbid – anything?

As we have pointed out in recent weeks, this present day acceptance of any and all sexual acts is not new at all. These dragons may seem new to us, but have been around for centuries. What is perhaps new is the rather large numbers of Christians – or people calling themselves Christian – who are embracing and defending what the church has long recognized as outright perversion. How do even some Christian “leaders” justify their acceptance of homosexuality and “gay marriage?”

Jesus, it is claimed by some, didn’t mention homosexuality so it must not be a sin. It is true that we do not have a record of Jesus explicitly addressing the issue in His earthly ministry.

This argument is seriously flawed. There are many things that Jesus did not explicitly comment on, but that does not mean that He rejected the clear teachings on these issues found in the Old Testament. With reference to homosexual acts, see Leviticus 18:20 and 20:13. In fact, Jesus said explicitly in Matthew 5:17 that He came to fulfill the law. Furthermore, the biblical view is that Jesus is God and the Old Testament is God’s word? Wouldn’t that mean Jesus did mention homosexuality after all? Jesus also affirmed marriage as being between a man and a woman in Matthew 19:5-6 and Mark 10:6-8.

…and said, ‘Therefore a man shall leave his father and his mother and hold fast to his wife, and the two shall become one flesh’? So they are no longer two but one flesh. What therefore God has joined together, let not man separate.” (Matthew 19:5-6)

But from the beginning of creation, ‘God made them male and female.’ Therefore a man shall leave his father and mother and hold fast to his wife, and the two shall become one flesh.’ So they are no longer two but one flesh. What therefore God has joined together, let not man separate.” (Mark 10:6-8)

Then there is this claim from proponents of homosexual practices:

The word ‘homosexual’ did not appear in any translation of the Christian Bible until 1946. There are words in Greek for same-sex sexual activities, yet they never appear in the original text of the New Testament.”

Actually, this is true but doesn’t really prove anything for two reasons. First, as “What Year Did Homosexual Become a Word?” points out:

In English the word homosexual was first used in 1892 in the English translation of Krafft-Ebing’s “Psychopathia sexualis” a German reference work on sexual perversions. The original appeared in 1886 and was enormously popular, being reprinted about once a year!

We don’t typically translate a word from one language into another (say Greek to English) if the two languages do not have a corresponding word. But once introduced into common vernacular, and widely accepted, English translators began using it.

Second, even without using the word, the act itself is described. In 1 Corinthians 6:9 and 1 Timothy 1:10 the words translated “homosexual” is:

Paul used two existing words, “ársēn” and “koítē,” from the Septuagint (Greek version of the Hebrew Old Testament), to create a new word. These words come from the Leviticus 20:13:

If a man (ársēn) lies (koítē) with another male as with a woman, both of them have committed an abomination; they shall surely be put to death; their blood is upon them.

The truth is that Christians must contend with the teachings of the entire Bible – we can’t just disregard parts of God’s Word that we don’t like. But young Christians, or the biblically illiterate of any age, can easily get caught up in the emotional propaganda, and not even realize that they have wandered away into enemy territory. Kevin DeYoung offers some thoughtful questions to pose to friends and family members who have been emotionally caught up in the rainbow craze in his 40 Questions for Christians Now Waving Rainbow Flags.

If we think the new reality is difficult for us to accept, imagine how much more difficult it must be for young people. They will need to be strong in faith to withstand the dragon’s fiery missiles if they refuse to deny their faith and capitulate to the dragon’s will. We need to be praying diligently for our young.

The animosity we are experiencing in this post-Christian era is not a historical oddity. The historical anomaly is the blessedly pro-Christian period and freedoms that we enjoyed for so long in this country. Jesus told us that the world would hate us, as it hated Him. He also assured us that if we lived godly lives, we would be persecuted for it. We are told not to fear, but to trust ourselves to God. We needn’t fear the dragons – but we should instead put on the armor of God and be well prepared to stand up and defend the truth of our faith.Ω

© 2015, Midwest Christian Outreach, Inc All rights reserved. Excerpts and links may be used if full and clear credit is given with specific direction to the original content.