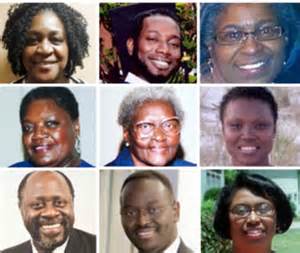 On Wednesday, June 17, 2015, the news services across the nation lit up with news of a multiple shooting – cold blooded murder in a South Carolina church, Emanuel AME Church in Charleston. The pastor, Clementa C. Pinckney (who, as it happens is also a State Senator) and eight church members were killed were killed by 21 year old Dylann Roof. Roof is white, all his victims were black, and there seemed to be no doubt of his guilt or his racist motives, since he openly admitted to his hatred of African Americans. He went into a Bible Study at the church, where he was welcomed warmly, yet after sitting with the group for an hour or so, he shot down the innocent and unarmed people in cold blood, leaving one person alive to tell the story. Ironically, we learned later that he no longer had even wanted to kill his victims, when the time came, because they were so nice to him. Yet he was able to overcome his better instincts, so intent was he to carry out his evil mission. By all accounts, the people he killed were wonderful people, living out their Christian faith. It was a horrible and very evil crime. The evil perpetrator was caught, confessed to the crime, and brought before the court and the family members of the people he had killed. He stood before them and was made to listen to them relate how very much he had taken from them, and how devastated they were by their loss. I imagine he thought he would hear extreme hatred directed at him, as his actions surely deserved. But instead, he and we all were treated to a show of Christian faith in action. In the midst of their grief, and we cannot even begin to imagine the grief, quite a few of them publicly extended forgiveness to the killer, Dylann Roof.

Forgiveness. What a strange and foreign concept in an increasingly hate filled post-Christian society. Dylann Roof will stand trial, and hopefully pay the price for his crimes according to the law. Still the forgiveness he was offered by the families was an amazingly powerful thing – unworldly, in fact. We watched a number of new shows as the newscasters scratched their heads in amazement as over and over a clear presentation of the gospel was given, by the families, by the woman who spotted the culprit and followed him so he didn’t get away, and by others. Lots of people, many of them Christians, black and white, stepped forward to show their support and to grieve for the victims and the families. The memorial service was broadcast in its entirety, and in itself was a wonderful witness of faith. It was a beautiful thing. One of the news channels interviewed a pastor who succinctly explained the forgiveness which the family offered:

He found people who found it in their hearts to forgive him so that they could move on with their lives. If they didn’t forgive him they would forever be in bondage to him.

The nation and the world was watching, and what they did was to demonstrate, up close and personal, the grace of God. Grace is a kindly attitude toward the undeserving. Dylann is clearing undeserving of any kindness from these brokenhearted people, but he nevertheless received it from those who had every right to demand bloody vengeance instead, and they did so publicly. They gave a public witness of the grace of God to millions. No one knows or can control whether the dark heart of Roof can be touched by their offer of forgiveness, or whether he will respond in any way to it, but the witness was given, freely and at great personal cost. Reflecting on this, two passages came to mind. The first is the Lord’s words from the cross in Luke 22:34:

Father, forgive them, for they know not what they do.

The Jews who demanded His crucifixion and the pagan Romans who carried it out paid little attention when the innocent Christ Jesus extended grace even while He was in the process of dying. In fact, the soldiers were in the process of dividing His garments at the time.

And now, brothers, I know that you acted in ignorance, as did also your rulers. But what God foretold by the mouth of all the prophets, that his Christ would suffer, he thus fulfilled. Repent therefore, and turn back, that your sins may be blotted out

Forgiveness was freely offered. Repentance was needed to receive it.

None of us know how this particular story will end. Will Dylann be gripped by the family’s response and repent? Will selfish human beings rush in and try to take the spotlight, trampling a sacred moment for their own reasons or agenda? Maybe. But no matter what follows, nothing can erase the good that has already been accomplished in those rare glimpses of Christian faith and charity.