No Delicious Waffle Fries for You Johns Hopkins Pt. 1 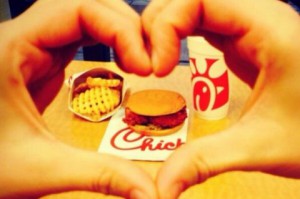 I hate it when I’m right. Just a few blogs ago, I wrote :

What scares me is that this is the death of rational inquiry and by extension the death of public discourse. Can we imagine a generation who react to our even attempting to share the Christian worldview not with anger or indifference but with the protestations of the injured. And if our Christian ideas are injurious, then it’s only a short leap over the First Amendment to say as a matter of public safety, there should be no public dissemination of them..[columnist] Shulevitz sees the writing on the wall. “Once you designate some spaces as safe, you imply that the rest are unsafe. It follows that they should be made safer.”

It seems Johns Hopkins University is just the kind of ground I’m talking about.  JHU’s student government association has set forth a resolution that says if Chick-Fil-A ever thought about bringing its tasty waffle fries anywhere near the baby feelings of the special snowflakes that make up the JHU student body, they will be told you cannot sell your chicken and lemonade here. Why, oh why, would the SGA want to prevent Chick-Fil-a from being able to offer the tastiest chicken nuggets ever? There are two shocking reasons amid the seven reasons mentioned in the resolution: Micro-aggression (which I just noticed is now suddenly a part of my Microsoft word dictionary so neologisms travel at the speed of light apparently) and the President of Chick-Fil-A  was disappointed in the U.S. Supreme Court and dared to say so. I’m sorry but some sorts of misguided lunacy can only be answered with sarcasm in heartfelt hopes of repentance. I pray that the SGA at Johns Hopkins will take my snark as a sign of both derision of an old man scolding the youngsters and an attempt to as Shakespeare said, “Hold a mirror up to nature.” I pray that Flannery O’Connor was right and that the best way to get near-sighted people to see far away is to draw really big pictures. First let me comment on the micro-aggression. In my next post I’ll talk about banning businesses from campus because their presidents said something about the Supreme Court you didn’t like. JHU’s resolution says that students, faculty, and visitors who are part of the LGBTQ community will experience micro-agresssion if JHU supports Chick-Fil-A and their insidious menu of tasty food. Aggression is defined by Websters as: 1: a forceful action or procedure (as an unprovoked attack) especially when intended to dominate or master 2: the practice of making attacks or encroachments; especially :  unprovoked violation by one country of the territorial integrity of another 3: hostile, injurious, or destructive behavior or outlook especially when caused by frustration If you go by def. 1, aggression is essentially the same as force. I have ten or so books on my shelf as I write this and their sole purpose is to interpret what force means. None of them however include serving the best tasting diet lemonade ever. If you take def. 2, we are still in the realm of force except now its taking someone’s space away from them–kind of like how North Carolina State University and  Indiana University are trying to get already established Chick-Fil-A’s thrown off campus in favor of less aggressive restaurant chains (with also less tasty waffle fries.) Def. 3 is much more vague. Still, hostile behavior is not force.See. I’m being hostile right now without being forceful. This a picture of me being hostile without being forceful. 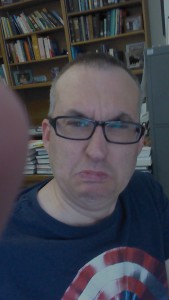 (see hostile, not forceful. The books I mentioned can be seen in the background) In fact, if any of the SGA at Johns Hopkins, by some remote chance, reads this little blog, I want you to know that I am emphatically not engaging in any force or injury no matter how much your feelings are hurt. So what is Micro-agression if it isn’t aggression on a small scale? Its a term of art. It is a social theory, no doubt taught at Johns Hopkins. Wikipedia quotes psychologist Derald Wing Sue:

Psychologist and Columbia University professor Derald Wing Sue defines microaggressions as “brief, everyday exchanges that send denigrating messages to certain individuals because of their group membership.”[5] Sue describes microaggressions as generally happening below the level of awareness of well-intentioned members of the dominant culture.

Okay I get that I think. Assuming that since someone is black that they are also the authority on Ferguson is micro-aggression. Asking someone who is Asian to help you with a complicated math problem or instruction in Kung Fu, that’s micro-aggression. But the fact that Chick-Fil-A gives money to organizations that support opposite sex marriage (which they in no way inform people about while taking their order) as they pass out those scrumptious golden nuggets of chicken, doesn’t strike me as saying anything. Furthermore, assuming that Chick-Fil-A will automatically cause this sort of distress just by serving those delectable Icedreams is kind of aggressive and paternalistic on the part of the SGA. If faculty or students don’t like Chick-Fil-A’s charity donations, they can protest as so many did. Come to think of it, this is often a great way to get some of that wonderful lemonade: 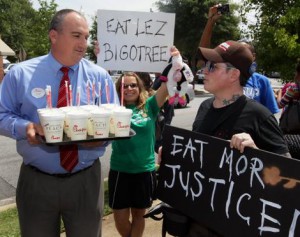 This view is premised, first of all, on the assumption that advocates of traditional marriage are devoid of rational argument and inspired only by hatred, and second, on the notion that allowing a company owned by someone who supports traditional marriage to operate on campus is equivalent to endorsing that support. Read more at: http://www.nationalreview.com/article/417305/johns-hopkins-chick-fil-ban-and-coming-gay-marriage-witch-hunt-andrew-guernsey

Allowing a company on campus is not endorsing that company or their charitable contributions. So here’s hoping that those young future student leaders will recognize that their actions are really making us old people shake our heads in public and fear for the future in private.Ω

© 2015, Midwest Christian Outreach, Inc All rights reserved. Excerpts and links may be used if full and clear credit is given with specific direction to the original content.