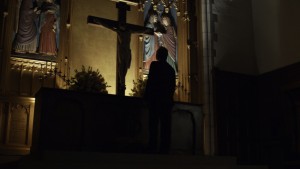 Those words were uttered by the character Frank Underwood in the Netflix original series “House of Cards” Just after saying those words, he spits in the face of the statue of Jesus. Just when I finally think I have to quell my strong desire for good story telling in favor of not subjecting my soul to House of Cards’ salacious innuendo and very adult situations, scenes like this show up. The first two seasons of House of Cards felt like a cross between Macbeth and soft-core porn. I’m happy to say that the producers have toned down the gratuitous sexuality in favor of writing a compelling story. But fair warning it is still mature viewing.

Frank Underwood has schemed, connived,and actually murdered his way from a congressman of one of the poorest districts in South Carolina to President of the United States. Frank makes no illusions about his moral character. He frequently breaks the fourth wall to give a running commentary of his evil exploits with all the glee of Iago in Othello. He describes his moral outlook as “ruthless pragmatism” and makes clear that he would make a deal with the devil literally if it would help him get what he wants:

In the scene where Frank desolates the statue, he has come to the church at night and tells the minister, “I want to understand what Justice is.”  He is troubled by the deaths of some soldiers he sent into harms way.  What follows is a discussion about Jesus’ sacrifice. Frank asks sincerely puzzled, “Why didn’t he [Jesus] fight Why did he allow himself to be sacrificed?” Perhaps recalling that Jesus said he could call legions of angels to fight for him, Frank is truly bewildered by the concept of love and sacrifice. All he knows is the law of “hunt or be hunted.” It is heartbreaking and fascinating to see the genuine perplexity on his face as he tries to fit God into his law of kill or be killed.

“I understand the Old Testament God who’s power is absolute. Who rules through fear. but him [points to the statue]”

He doesn’t finish his statement. Its as if he is baffled by the concept of sacrifice itself.

It reminds me of a passage from C.S. Lewis’ Screwtape letters. Screwtape, the senior demon, instructing Wormwood his nephew expresses the same sort of confusion at the very concept of love and sacrifice:

“The truth is I slipped by mere carelessness into saying that the Enemy really
loves the humans. That, of course, is an impossibility. He is one being, they
are distinct from Him. Their good cannot be His. All His talk about Love must be
a disguise for something else—He must have some real motive for creating them
and taking so much trouble about them. The reason one comes to talk as if He
really had this impossible Love is our utter failure to out that real motive.
What does He stand to make out of them?”

Screwtape, like Frank Underwood, can’t conceive of the idea disinterested love. It defies his logic of hunt or be hunted, which Screwtape calls the Philosophy of Hell:

The whole philosophy of Hell rests on recognition of the axiom that one thing is
not another thing, and, specially, that one self is not another self. My good is
my good and your good is yours. What one gains another loses. Even an inanimate
object is what it is by excluding all other objects from the space it occupies;
if it expands, it does so by thrusting other objects aside or by absorbing them.
A self does the same. With beasts the absorption takes the form of eating; for
us, it means the sucking of will and freedom out of a weaker self into a
stronger. “To be” means “to be in competition”.

I love the response by the minister to Frank. It cuts deep like a two-edged sword should. It cuts right to the heart of Underwood’s ruthless pragmatism. Its not your duty to decide what is just. Ruling with fear will get you nowhere. Its not your duty to serve this country alone and it better not be your goal to serve yourself.

All of these things are just what Frank Underwood has spent three seasons doing. He has lied, deceived, and even killed two people to get what he wants.The one person he defers to is his wife Claire and that relationship is tested when he finally gets what he wants.   When Claire has a rare moment of conscience she says, “We’re murderers Francis.” and Frank replies “No we are survivors” In the law of hunt or be hunted “murder” doesn’t make sense. There is only survival.

He piously asks to pray alone. And then we see the torments of hell in miniature. Someone who has thinks himself the only god is confronted by a rival who he doesn’t understand. There can be only one God and Frank will not allow it to be anyone but himself. And so he defaces the God he has not chosen with with cynicism, “Love? I’m not buying it.” Better reign in hell than serve . . . at all.

It is a powerful image. Here’s another one. 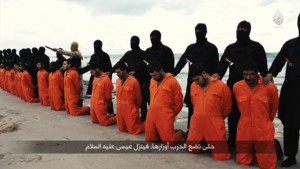 21 Egyptian Christians beheaded by ISIS. Reports are that each of them were allowed to make a final statement. For most the last words on their lips was “Lord Jesus Christ.” A brother of one of the martyrs recently thanked ISIS for not editing out those statements. A Christian pastor in Egypt reports the following:

There is no way to make sense of this if your only starting point is the philosophy of hell. But if true sacrificial love is not a fairy tale just another deception then these men did more than die on that beach. Their lives were more than hunt or be hunted. We have faith that God is just but we also know that Frank Underwood was wrong. The Old Testament God wasn’t just wrath and power, from the beginning he made a covenant to love the whole world, first through Israel and then through the Messiah, Jesus. This is the Philosophy of Heaven.