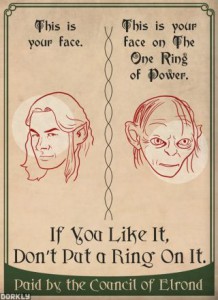 I love video games where I get to play the hero who smashes the bad guy. I suppose that’s why I like comic books as well, even though telling the good guys from the bad guys in comics has become much more difficult these days. I love playing the avenging angel bringing justice to universe of my Xbox 360.

I think I like play acting the conquering hero because, growing up, I was so not that boy. I was a slight, bookish, 80 pound weakling with tiny wrists and a shy demeanor. This  meant I was unqualified for virtually any team sport. I was too small for football, to uncoordinated for basketball, and to impatient to play the lonely left field in little league.

Inevitably I was bullied. I don’t mean teased or tormented about my skinny frame or my glasses or my fascination with Dungeons and Dragons. I can remember several altercations with bullies in my elementary and middle school years where I was backed against a wall or cornered far from the safety of the watchful eyes of adults. I was hit three times in the jaw by one kid who had absolutely no reason to hit me other than I most likely wouldn’t hit back. When his sisters tried to get him to apologize, he emphatically told me he wasn’t sorry and then pushed me to the ground. Once,  I was chased panting down the street by one of my neighbors. I thought my heart would burst until I could jump on my trusty bike and make an escape. I can never remember a time when I “stood up for myself ” as the saying goes. I always wanted to. I took karate and everything. To this day, I have never hit another person in anger or self-defense.

This sort of degradation creates a lot of anger in a little boy. I didn’t realize how much until recently, when I was watching a new television show called Backstrom. In the episode, an unorthodox police lieutenant, Backstrom, has to investigate his childhood bullies who are not firefighters for arson.

Not much has changed of course, the firefighters are still man-children who still want to bully Backstrom. At one point, the some of the suspects EMT friends kidnap Backstrom and actually use the defibrillator on him in an effort to intimidate him into backing off the firemen.

I found myself imagining, no fantasizing about doing serious violence to the people who were bullying Backstrom. In a millisecond, my brain was awash with bloody-minded revenge. my plans were complex, detailed, and thoroughly wrong.  It shocked me. It scared me what I wanted to happen to those bullies. Even after 30 odd years, that little boy was still there, pushed down inside me and his anger and frustration had made him shriveled and ugly and very very angry.

Sort of reminds me of someone: 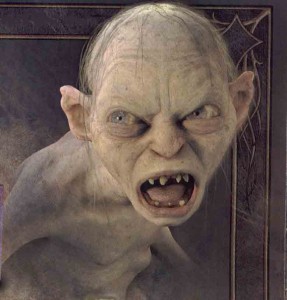 Yep. that’s what my inner child looked like as I was watching that show.

If you know anything about the Lord of the Rings, you know that this little creature was once a hobbit (proto-hobbit) name Smeagol. In a fit of anger and lust killed someone to get his precious ring. That magic ring gave him a long life but only in a dark, black hole in the ground where he nursed his greed until he slowly becomes this thing called Gollum.

In literature, we sometimes see these glimpses into our inner ugliness. Hamlet laments his own darkness:

I am very proud, revengeful, ambitious, with more offenses at my beck than I have thoughts to put them in, imagination to give them shape, or time to act them in. What should such fellows as I do crawling between earth and heaven?

In a rare moment of self-confession, Paul lets us in on his own inner life.

Although I want to do good, evil is right there with me. For in my inner being I delight in God’s law; but I see another law at work in me, waging war against the law of my mind and making me a prisoner of the law of sin at work within me. What a wretched man I am! Who will rescue me from this body that is subject to death?

In essence the same question asked 1500 years apart. What do we do with the Gollum? Paul says, we kill it.

Put to death, therefore, whatever belongs to your earthly nature: sexual immorality, impurity, lust, evil desires and greed, which is idolatry. Because of these, the wrath of God is coming.You used to walk in these ways, in the life you once lived. But now you must also rid yourselves of all such things as these: anger, rage, malice, slander, and filthy language from your lips. Do not lie to each other, since you have taken off your old self with its practices and have put on the new self, which is being renewed in knowledge in the image of its Creator.

What is particularly comforting in this passage is that the old self had practices (“taken off the old self with its practices”) and so does the new self. The new self is growing, its being renewed. In fact, its being renewed into something it was supposed to be all along: the image of its creator. In essence we starve Gollum out of us with the practices of prayer, service, and worship.