Grace in the Face of Mockery

Once when discussing the Black Mass at Harvard a friend of mine asked me if there was any sort of degradation of Christianity as a religion that I would think was so bad as to warrant the state prohibiting that action by law or punishing the offender. I said “No.” This surprised him. I suppose you could say my beliefs on this on polar opposite of the perpetrators of the massacre at the French satirical magazine Charlie Hebdo. These men and woman ostensibly believed they were approved by God in what they did and that all like-minded believers are justified and encouraged to defend the image of the prophet Mohammed by killing if necessary

Muslims don’t have a monopoly on mockery. Consider the following: 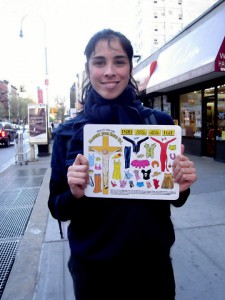 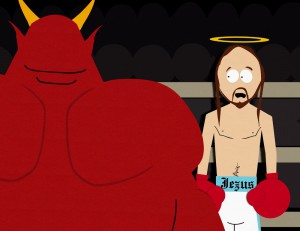 One of many South Park depictions of Jesus 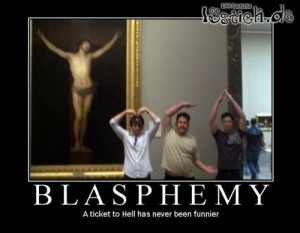 Whatever these knuckleheads are doing

Now honestly after looking at those pictures did you:

1) have a strong desire to track down the people responsible for these and kill them?

2) think it would be fitting or just for someone to do them violence even if you yourself wouldn’t do it?

I’ll venture to guess that the answers to those questions were “No” but if not, I bet the answer to these are “Yes”

3) If you did think these people should be done violence were you also ashamed of yourself for thinking that way shortly there after?

4) If someone were to say to you something like, “Somebody really would be doing God a favor if they just put a bullet in those people.” Would you think something is seriously wrong with their soul?

Now here’s a deeper question: “Is the fact that most Christians would answer “No” to 1 and 2 and “Yes” to 3 and 4 because we live in a culture of free speech and are essentially privileged white people or because of something deeply held?

By in large Christians have never called for individuals to take it upon themselves to defend God against mockery with violence. From the birth of Christianity, calling for violence, approving of that violence, and publicly encouraging others to respond with violence is so rare as to be the exception that proves the rule. Yes, Christians have condoned persecution, imprisonment, and even death for blasphemy (not believing, not being baptized, not converting) but have not called for violence against those who criticize or mock our faith. There is no real equivalent of the Muslim fatwa in Christianity.

As I understand it, A fatwa is a legal ruling by a Muslim cleric about some aspect of Muslim law (Sharia). Fatwas are complicated and there is disagreement about who it is binding and how a fatwa can be issued. However, can you really imagine, in response to The Last Temptation of Christ or any one of a dozen South Park episodes, any Christian leader issuing a fatwa like the Ayatollah Khomeni issued against Salman Rushdie for the Satanic Verses, a satire of Islam?

I am informing all brave Muslims of the world that the author of The Satanic Verses, a text written, edited, and published against Islam, the Prophet of Islam, and the Qur’an, along with all the editors and publishers aware of its contents, are condemned to death. I call on all valiant Muslims wherever they may be in the world to kill them without delay, so that no one will dare insult the sacred beliefs of Muslims henceforth. And whoever is killed in this cause will be a martyr, Allah Willing. Meanwhile if someone has access to the author of the book but is incapable of carrying out the execution, he should inform the people so that [Rushdie] is punished for his actions.

True, the Ayatollah was a nutjob and his fatwa was inconsistent with shariah law which requires at the very least a trial before executing someone for making fun of Islam. I’m not making claims about whether or not killing those who depict the prophet Mohammed is consistent with the Quran or not. I’m not qualified to do Quran exegesis. I am only interested in the tradition within Christianity which has never been to act violently toward mockery or to condone those who kill because someone mocks Christianity.

There are several explanations one could offer why Christians have not acted violently in the face of mockery. You could say this behavior has nothing to do with Christianity but rather something like Western (largely American) culture of tolerance toward non-believers. It is, so to speak, steeped in our bones to tolerate not just blasphemy (i.e. expressing anti-Christian sentiments) but mockery.

You could also say that the real reason for a lack of violence in the face of mockery is because Christianity is in the majority and the majority doesn’t have to resort to violence. Christians are by-in-large from wealthy countries, and the wealthier you are, the less likely you are to engage in violence. Its impossible to refute these hypotheses.

There is really no way to definitively say what are the causes of the behavior of an entire religion. Is almost certainly the case that the lack of Christian violence is traceable to one cause. However, I don’t think these non-spiritual explanations are a sufficient explanation for this phenomenon. Tolerance of religious mockery goes back further than the idea of the first amendment. And it seems to transcend wealthy Americans.

As an aside. A friend of mine pointed out that the Quran doesn’t actually condemn depictions of Mohammed let alone violence in response. In fact there were many depictions of Mohammed in the 13th-15th centuries. While images are discouraged, fatwas have not been on the basis of simply depicting Mohammed. Rather the violent justification for sanctioned killing are a response to degrading depictions of Mohammed. As one Islamic history professor said of the famed Mohammed cartoons, “it was not simply the depiction of Muhammad that was offensive, but the implication that Muhammad was somehow a supporter of terrorism.” There are some things cannot be ridiculed at all.

What about Christians? Is there some aspects of Christianity that we simply cannot tolerate non-believers ridiculing–so much so that violence can be justified. Not really. I want to suggest a few other reasons why Christians haven’t really called for violence as a response to mockery.

First, Jesus endured mocking far worse than South Park. Naked, falsely accused of sedition, and hung out for all the world to ridicule. 1 Peter 2:21-23

To this you were called, because Christ suffered for you, leaving you an example, that you should follow in his steps. “He committed no sin, and no deceit was found in his mouth.”They hurled their insults at him, he did not retaliate; when he suffered, he made no threats. Instead, he entrusted himself to him who judges justly.

Within these verses we find the first theological clue why Christians might tolerate without violence. Suffering insult without retaliation isn’t just nice or liberal, it is our calling. Christ sets the example for us. To a secular world this glorification of suffering looks like masochism. To us it looks like our savior. So there is a strong idea in Christian teaching that suffering insult without retaliation is explicitly something Christians are called to endure. I suggest no such explicit statement is found in Islam.

What this verse also says is that our example, Jesus, could endure because he entrusted himself to God who judges justly. While Rome judged him a traitor, Jesus knew that God judged him righteous. You might be tempted to think that this verse indicates that Christians can secretly revel in the fact that though we tolerate abuse, the abusers will get what’s coming to them. God will avenge our injustice. It certainly is true that God will judge the quick and the dead. Christians cannot privately console themselves, however, by imagining God gleefully exacting revenge on the producers of The Da Vinci Code. To do so would be to ignore 1 Peter 4:15-18

But in your hearts revere Christ as Lord. Always be prepared to give an answer to everyone who asks you to give the reason for the hope that you have. But do this with gentleness and respect, keeping a clear conscience, so that those who speak maliciously against your good behavior in Christ may be ashamed of their slander. 17 For it is better, if it is God’s will, to suffer for doing good than for doing evil. For Christ also suffered once for sins, the righteous for the unrighteous, to bring you to God.

Our tolerance of ridicule is not merely biding our time until God stomps the ungodly for their insults. Rather the goal is that our behavior, our grace in the face of mocking will somehow convict the hearts of those who ridicule Jesus. To drive this point home, Peter reminds us that we too were brought to God through the suffering of Jesus. Our understanding of the pervasive depravity of sin means that we must always remind ourselves that “while were yet sinners, Christ died for us.” We cannot be smug in the face of mockers. God will not allow us to forget that all of us are included in the phrase “All have sinned and come short of the glory of God.”